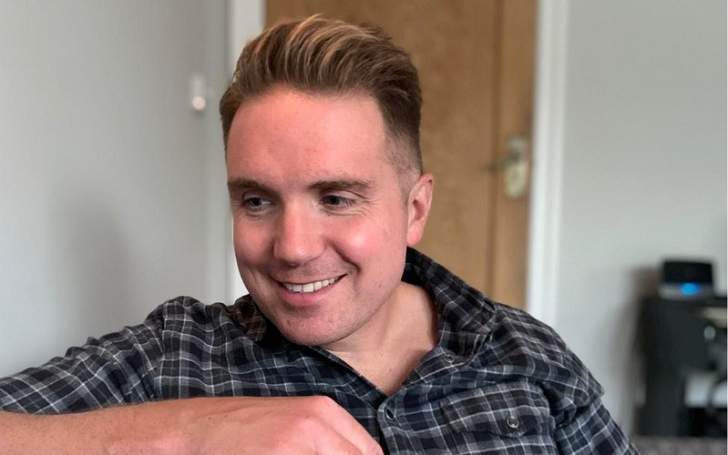 Timothy Hawking (aka Tim Hawking) is the youngest child of late Stephen Hawking, one of the most glittering scientists of his generation. Besides, although Tim couldn’t make a big name like his late father, the famed star kid is doing a fantastic job in his own way. He currently serves as a brand development specialist at the Hawking Estate, managing family legacy and developing a comprehensive brand identity.

In addition to all that, there are some conflicting reports about who is Timothy Hawkingn’s real father whether Stephen or his wife Jane Hawking‘s second husband Jonathan Hellyer Jones? We will provide all the truth about Tim.

In the meantime, also know is Timothy married? If yes, who is his wife? Numerous facts regarding him!

How old is Timothy Hawking? His Early and Family Details

Tim is 42-years-old. He was born in St. Albans, Hertfordshire, the United Kingdom on 15th April 1979, to parents Stephen and his wife Jane. His paternal grandparents were Frank and Isobel Eileen Hawking. On the other hand, talking about his maternal grandparents, they were George and Beryl Wilde. His mother Jane grew up in a Church of England.

He has two older siblings; a brother named Robert Hawking, born in 1967, and Lucy Hawking, born on 2nd November 1970. All the Hawking siblings have great careers in their own respective fields.

Their older brother Robert is now a software engineer while Lucy is a multifaceted lady who is known for her multiple roles ranging from journalist to novelist to educator. The University of Oxford graduate is also involved in philanthropic works.

Timothy Relationship With His Father Stephen: Their Initial Incoherent Communication

Being the youngest of three children, Tim obviously had a wonderful childhood. But in an interview with the BBC host Dara O’Briain, Hawking opened up that his father couldn’t speak clearly until his fifth birthday. He said,

“My dad was able to speak with his own, natural voice for those first years, but it was incredibly difficult to understand what he was saying — particularly for me at such a young age.”

“As a 3-year-old, I had no understanding of what he was saying. I didn’t really have any communication with him for the first five years of my life.”

In the same interview, Timothy also revealed the proper communication between the father and son began only after Stephen received a computer-driven speech program called “Equalizer.”

Besides, Timothy and his late dad Stephen were fierce competitors in several board games, especially in chess. He once told,

“There was no compassion at all. My father is hugely competitive, and he certainly wasn’t the easiest opponent at any game, particularly chess.”

According to Stephen’s ex-wife Jane, Stephen Hawking is the biological father of Timothy and not her second husband Jonathan. The conflicting rumors regarding who is Tim’s real father started back when Jonathan had just become close to the Hawking family, eventually developing a platonic relationship with Jane.

Looking back at the love story of Stephen and Jane, the duo first came across at a 1962 New Year’s party. Unfortunately, a year after their meeting, Hawking was diagnosed with motor neuron disease (MND; aka amyotrophic lateral sclerosis). It directly affects the nerves in the brain and spinal cord.

A heartbreaking moment came when doctors gave Stephen a life expectancy of two years at the age of 21. Although the greatest physicist of the era was on the verge of death, his then-girlfriend Jane never gave up on him, instead was ready to take their relationship to the next level. They got engaged in October 1964.

On 14th July 1965, the two exchanged their vows. They used to live in Cambridge. A couple of years later into a marital relationship, Stephen and Jane also began a family together, welcoming a son, Robert in May 1967.

But, on the other hand, Stephen’s health condition deteriorated to the extent that the scientist was confined to a wheelchair. While the increasing responsibilities of the family over Jane’s shoulders, the organist Jonathan Hellyer Jones came into her life and gradually became close to all the Hawking family members.

Furthermore, like Jane, Jonathan is also an avid music lover. The two remained close friends for a long time before developing romantic feelings for each other. Although most of their family members knew about their growing bonding, Jane and Jonathan decided not to break up the family neither their relationship which remained platonic for a long period.

Hawking for the second time tied the knot with his nurse Elaine Mason in September 1995, a few months after his divorce finalization with Jane.

Two years later Hawking’s marriage to Elaine, Jane also married her long-time boyfriend Jonathan. Despite the two moving on with different people, Jane always supported her ex-husband due to his physical disabilities.

Nonetheless, Stephen divorced Mason in 2006 and became close to his former spouse until his death on 14 March 2018, in Cambridge.

Talking about his current job, Timothy serves as a brand development specialist at Hawking Estate, in London, Greater London. He is there responsible for legacy management, brand development, and copyright protection, preserving his late father’s work, reputation as well as a legacy for generations to come.

Furthermore, Hawking is also an active member of The Stephen Hawking Foundation. The foundation which was created on 29th October 2015 focuses on the research into various fields like Cosmology, Astrophysics, and Fundamental Particle Physics.

Timothy went to the University of Exeter and graduated with a Bachelor of Arts in French & Spanish in 2002. He later went on to enroll at The University of Birmingham and earned a Master of Science in Marketing in 2005.

In 2009, Tim held two more account managing jobs at Boxer and Doner Cardwell Hawking respectively. He then went on to work with LEGO Group, landing the first role as a loyalty executive at the group. He also worked as an assistant marketing manager, Loyalty Rewards Manager, and brand developing manager until quitting the job at LEGO in Jan 2019.

What Is Timothy Hawking Net Worth?

His net worth is $500,000 as per some online sources. He has racked such a good fortune from his various roles.  In the meantime, his late dad Stephen had a wealth of $20 million at the time of his death.

Who Is Timothy Hawking Wife?

The youngest son of Stephen has kept most of his love life behind closed doors. He even doesn’t have any social media accounts. Due to his tendency of keeping things to himself, it is yet to confirm whether Tim has a wife or not.

Apparently, many sources say Timothy has not married and is relishing a single status.