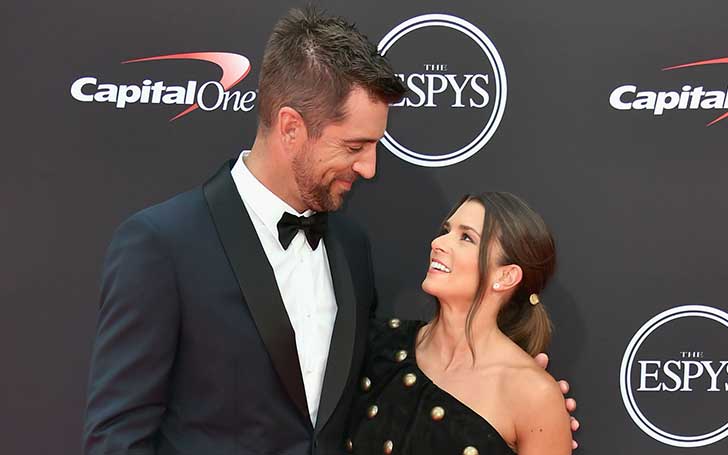 American footballer Aaron Rodgers, who plays as quarterback for the Green Bay Packers, is in the final half of his professional career. Starting in 2005, Rodgers has spent 15 long seasons in NFL and he is now very close to bidding farewell to professional football.

However, if we look at his relationship, he has just been in the starting phase. By the looks of things, Aaron might soon marry his girlfriend. The most interesting thing is the footballer confirmed his engagement with his girlfriend in February 2021.

Unlike many other celebrities, Rodgers has been pretty open about his love life. Well, for those who are still asking the question, who is Aaron Rodger’s girlfriend? We have all the answers here!

American football quarterback shocked everyone with the news of his engagement with actress Shailene Woodley. Aaron’s girlfriend turned fiancee Woodley broke the news during a conversation with Jimmy Fallon on Monday night.

While Rodger was expected to marry his former girlfriend Danica, things apparently changed during the pandemic. Since things turned sour between Danica and Aaron, he reportedly moved on to date Shailene.

As per the reports, the Green Bay Packers quarterback met The Descendants star in 2020 and engaged soon after that. Talking about the meeting, Woodley stated,

We met during this whacky, whacky time and all of the stadiums were closed that he was playing in, so I’ve yet to go to a football game. I didn’t really grow up with sports, especially American sports; it was never really on my radar.

Moreover, Aaron too stated how things changed for him in 2020. Talking about all the situation and hinting his new relationship during an acceptance speech, he stated,

It’s an honor to win this award for the third time, 2020 was definitely a crazy year, filled with lots of change, growth, some amazing, memorable moments, 180 straight days of having my nose hairs scraped, playing for very little fans or no fans the entire season, I got engaged, and I played some of the best football of my career.

Aaron Rodgers and Danica Patrick met at the 2012 ESPY Awards. The latter opened up about their first encounter while she confessed her relationship with Rodgers back in January 2018. Patrick told Associated Press that she told him she had “always root for him as a player.”

In an interview with For The Win, Patrick shared how she and Rodgers remained in-touch after their first meeting. There she said:

“We’ve just been sort of friends the whole time, kept in vague touch and seen each other at the ESPYs almost every year, and other places.”

“So one thing led to another, and we realized how similar we were and yeah, that got the ball rolling.”

The pair became closer after both Rodgers and Patrick broke up with their respective partners. Rodgers separated from actress Olivia Munn in 2017 and Patrick ended her five-year-long relationship with NASCAR driver Ricky Stenhouse Jr.

The lovebirds make their first public appearance in February 2018 at the Daytona 500. There, Rodgers was snapped giving Patrick a good-luck kiss before she did the last NASCAR race of her career.

Rodgers Only Confessed His Love in October 2018

Where Patrick announced she and Rodgers were dating in January 2018, her beau took ten more months to confess his love for Patrick publicly. Back then, he talked about his romantic relationship with Patrick in a talk with Artful Magazine. Rodgers said:

Even though Rodgers loves keeping his love life relatively private, he said he enjoyed being more public with his girlfriend Patrick.

Ever since Rodgers interviewed for the Artful Magazine, the lovebirds started making a frequent public appearance as well as they started appearing on each other’s social media posts.

Rodgers and Patrick Bought A Mansion 2019

Well, Rodgers, 36, and Patrick, 38, might have fulfilled many of their couple goals in 2019. The year started with Rodgers taking his girlfriend to a surprise trip to Paris to celebrate her 37th birthday and ended with them buying a mansion in Malibu.

On March 27, 2019, Patrick shared a photo on her Instagram, in which the lovebirds can be seen sharing a kiss in front of the Eiffel Tower. In the caption, Patrick wrote: “For my birthday he said to pack a bag, we are going somewhere……💕 Amazing.” Here is the post.

In November 2019, Rodgers and Patrick splurged a whopping $28 million for a Malibu, Calif. mansion. The 4,636 sq. feet property features 4 bedrooms, 4 bathrooms, and a 2-bedroom guesthouse.

Well, both Rodgers and Patrick were expected to tie the knot. In fact, in an interview with E! News, Patrick said that she hopes she would marry Rodgers someday. There she said:

“I would hope that’s the intention. Look, there [are] no guarantees in life, but as long as you have that intention, that’s what matters, right?”

Moreover, there was a lot of buzz about their marriage in the media. If the lovebirds would marry, it will be the first for the NFL star while the second for Patrick as she was previously married to Paul Hospenthal, a physical therapist from 2005 to 2013. But unfortunately, all their fans expect to see them both married are broken since they have already broken up.