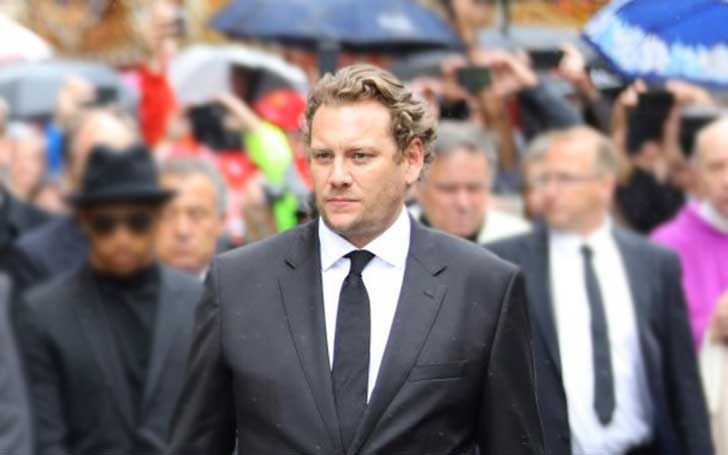 Lukas Lauda is the first-born son of the late famous Formula One racer Niki Lauda. Niki welcomed his first child, Lukas with his first wife Marlene Knaus. In spite of being a star kid, Lukas has always remained low-key when it comes to his media appearance.

Meanwhile, Lukas has a younger brother, Mathias Lauda who has followed in the footsteps of his late father. Mathias currently races for Aston Martin Racing. But what does Lukas Lauda do? Where is he now? These are the few representative questions being searched on the internet frequently.

Lukas Lauda was born on April 5, 1979, to father Niki Lauda and mother Marlene Knaus. While many sources have revealed Lukas was born in the Austrian city of Salzburg, some sources, including a blog site report he was born in South Africa.

As reported, Lukas was named after his father, Niki’s great friend Luca Montezemolo. Luca was the Sporting Director with whom he shared the first two exceptional years of experience in Ferrari.

Talking about his ethnicity, Lukas belongs to a mixed ethnic background. His father, Niki was a native of Austrian while his mother Marlene is of Chilean-Austrian descent.

Besides, Lukas has one younger sibling, brother Mathias Lauda. Mathias is an F1 driver like his father. Mathias has had an extended career in racing, however, unfortunately, he hasn’t achieved as much as his father achieved in his career.

Lukas’ parents Niki Lauda and Marlene Knaus were married for more than one and a half-decade before their divorce. As per the report, the pair met in 1976 at a party of Curd Jurgens and they instantly hit it off. After a mere couple of months of courtship, the pair married in a secret wedding on March 11, 1976.

The former husband-and-wife welcomed two children in quick succession and lived a happily married life for years onward. However, after they marked one and a half decades of togetherness, their relationship hit the rock. They couldn’t reconcile and separated by the early 1990s. Niki and Marlene finalized their divorce in 1996, nearly 20 years after their nuptials.

Besides one biological sibling, Lukas Lauda has three half-siblings, two from his father’s second marriage and one from his extra-marital affair. Lukas’ father, Niki reportedly cheated on his mother with an unidentified woman. With her, Niki welcomed a son named Christoph Lauda in the 1980s.

Their children were born in 2009 and are 12 years old as of 2021. Niki’s second wife, Birgit is a former flight attendant and was 30 years his junior.

Lauda’s father, Niki who was the three-time Formula One champion passed away in 2019 at the age of 70. The racing veteran passed away on May 20 in the University Hospital of Zürich in Zurich, Switzerland. He reportedly took his last breath during his sleep and his family members didn’t reveal the cause of his death.

The race car driver who was injured multiple times and once had a nearly fatal crash during his racing career had undergone two successful kidney transplants. His brother donated him a kidney during his 1997 transplant while his second wife, Birgit was the second kidney donor for the late racer.

Meanwhile, Niki struggled with lungs disease during the last few years of his life and in 2018, he reportedly underwent a successful lung transplant surgery in a hospital in Vienna, Austria. Niki is survived by his five children, his widow, Birgit, and former wife Marlene.

What does Lukas Lauda Do? Is He a Soccer Manager?

As we mentioned earlier, Lukas doesn’t pursue the career path of his late father. In fact, he is not interested in racing as a driver, but he served as a manager for his younger brother Mathias for some years. Reports suggest Lukas was working as a manager for his brother until their father’s death, however, it’s unclear if he still does the job.

Besides, there have been reports that say Lukas is a soccer team manager in Austria. However, we haven’t found any fact that suggests Lukas has anything to do with soccer.

His Personal Life is in Shadow Due to His Secretive Nature

Lukas Lauda always stays away from the limelight. He doesn’t appear in media much and has stayed away from social media platforms like Facebook and Twitter. Even though he does have an account on Instagram, he has set it to private. Due to these factors, his personal life is entirely out of the media’s reach.

Looking at his display picture on Instagram, he appears to have a child, however, the fact is not verified as of yet and there is no detail about his partner as well.

Lukas Lauda Net Worth-How Much Wealth He Inherited after His Father’s Death?

Since Lukas Lauda’s career path is not so evident, it’s a little difficult to speculate his net worth and earnings at the moment. However, Lukas, being the first-born son of Niki Lauda received a whopping sum after his father’s death. It means Lukas Lauda has millions of dollars in net worth.

His late father was a multi-millionaire at the time of his death. According to Celebrity Net Worth, Niki Lauda was worth $200 million at his death in 2019. Regarding his salary, the site mentioned that he took a hefty $1 million in 1978 from Brabham-Alfa Romeo. The amount is the same as $4 million at present after adjustment for inflation. Besides, he also owned multiple airline companies which earned him a huge fortune.

But, according to The Sun, late Niki Lauda had a staggering net worth of more than $550 million. The outlet revealed that a German magazine named Bunte revealed Niki’s fortune following his death. The Sun also wrote about Niki’s will.

Niki Lauda initially drafted the will back in 1997 in which he decided to give all his fortune to his ex-wife Marlene and his two sons, Lukas and Mathias. But it was later changed twice; first in 1999 when he specified four trustees would be tasked with distributing his inheritance after his passing. One of them was his long-time friend, Attila Dogudan.

Niki made a big change to his will one last time in 2014 when he added his second wife Birgit and their two children to the will. The majority of his wealth was given to his four children and his second wife, however, Niki had reportedly set a good sum for his first wife, Marlene, and his son Christoph.

Who Is Jocelyn Howard? Is She Married? Know Ron Howard’s Daughter