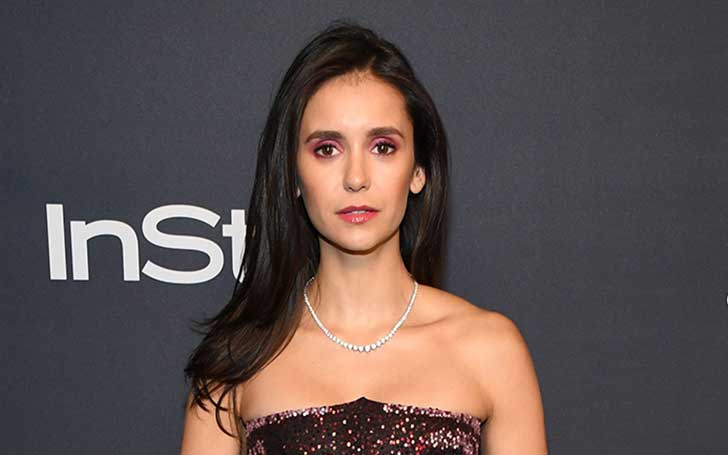 Canadian actress and model Nina Dobrev rose to stardom after she portrayed Elena Gilbert and Katherine Pierce on The Vampire Diaries.

So, has Nina Dobrev found the love of her life? Is she married or single? Let’s find out here:

Who is Nina Dobrev Boyfriend in 2020?

Nina Dobrev is reported to be dating American professional snowboarder Shaun White in 2020. Even though the Bulgarian-born actress hasn’t introduced White as her boyfriend, her recent social media activities hint she and White are dating.

Dobrev and the former Olympian White were first spotted biking along the trails in Malibu, Calif. in March 2020. Later, White was snapped leaving Nina’s home.

Furthermore, Nina and her new beau spent their quality time together during the lockdown enforced due to the coronavirus pandemic.

On May 29, 2020, actress Dobrev took to her Instagram sharing a couple of photos of her with White. The photos showed Nina herself cutting White’s hair. “Adding to resume: hairdresser,” wrote Nina in the caption.

On the other hand, White also shared a post on Instagram which made their fans and media believe that they are an item. In his post, White gave an even better insight into Nina’s haircutting process. “My hairstylist said he wouldn’t, so she did #QuarantineCuts,” White wrote in the caption. Here is his post.

The three-time Olympic gold medalist included his photos before and after the haircut alongside a time-lapse video that showed the whole haircutting process.

Meanwhile, an insider told Hollywood Life in May that Nina and Shaun have been spending lots of time together. The source added,

” this lockdown has brought them closer than ever.”

The source didn’t reveal whether they are dating or not.

Nina and Shaun Had a Trip to Utah

According to Daily Mail, Nina Dobrev and Shaun White went for a trip to Utah in early May. They didn’t reveal they had gone on a trip together, however, they had shared their photos on their individual Instagram.

Even though they didn’t disclose, their fans picked that their social media posts synced. Moreover, Nina and White happened to tag the same photographer, Cole Ferguson in one of their posts.

Before Shaun White, actress Dobrev was in a romantic relationship with screenwriter Grant Mellon. The ex-lovebirds were first spotted together during an L.A. Lakers game in March 2019.

Back then, a source close to the couple revealed they were keeping their relationship low key intentionally. The couple broke up in November 2019 after less than a year of togetherness.

Nina and Actor Ian Somerhalder Dated for a Couple of Years

During the early 2010s, actress Nina was famously linked with fellow The Vampire Diaries star Ian Somerhalder. The former flames first met in 2009 while they started their journey in The CW series.

After seeing each other quietly for some time, Dobrev and Somerhalder made their relationship official in 2011.

Before she started dating Ian, she had noted that she would never like to date a costar. Talking to Seventeen, Nina said:

“my goal on the show was to be professional. But sometimes you can’t help who you have a connection with, and you can only fight it for so long.”

After over a two-year-long relationship, Dobrev and Ian called it quits in 2013. The ex-couple didn’t reveal the reason for their break up.

As of June 2020, the 31-year-old actress is unmarried. Furthermore, The Vampire Diaries star has not ever talked about her marriage.

While Dobrev is still not sure about her marriage plan, her ex-boyfriend Ian Somerhalder is happily married to actress Nikki Reed.

The pair tied the knot in April 2015 and they also have a daughter, whom they gave birth in July 2017.