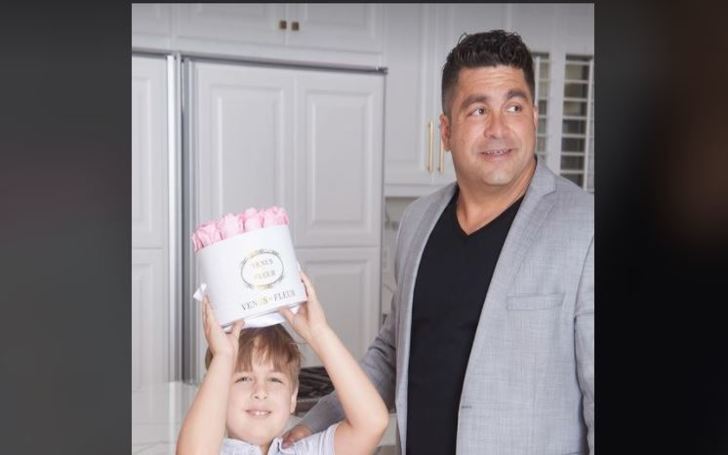 Monty Lopez is a social media star who is also known as the father of one of the most popular social media personalities, Addison Rae. Rae’s father, Monty also entertains quite a number of followers — over 5 million in Tiktok, and close to 400k on Instagram.

On the other hand, Lopez’s daughter, Rae, a dancer, actress, and singer, as of July 3, 2021, has amassed over 81 million followers on TikTok. She ranks as the fourth most-followed individual on the platform behind Charli D’Amelio, Khaby Lame, and Bella Poarch.

Lopez has been very expressive on his social media accounts of his love for his daughter, sharing photos of her from when she was really young up until now. Know more about his relationship with his super famous daughter, his own life in finer details, the specifics of his courtship with Rae’s mother, as well as some Infos from his professional facets.

Addison Rae’s Father Monty Lopez Is A Native Of Louisiana

Some believe he is of Hispanic ethnicity, presumably a child of Mexican parents, though, the man, himself has hardly talked about his lineage.

What’s known, however, is he spent most of his adult life in Louisiana and is a native of Carencro. He is also a graduate of the University of Louisiana at Lafayette.

Monty Lopez Used To Work In The Construction Business

Before Tiktok, Monty Lopez and his family ran a housing industry under the parent company, Berkshire Hathaway. Lopez worked in the field for about two decades.

In an interview with Forbes, the Louisiana native revealed he did a lot of construction for various kinds of homes. He said the construction company was really exciting, and it was good company.

Lopez had thought of doing it for his entire life before his family found success on the internet. He also worked in The Bahamas during one point in his career.

The former student of the University of Louisiana additionally worked in the trailer business, and his brother had a business with RVs. His sibling owned a lot of RVs.

He Originally Didn’t Think Of Doing TikTok As A Career

The ex-lumber businessman shifted to media fame in late 2019 a few months after his daughter became a breakout icon. The following year, in Jan 2020, Monty Lopez and his partner after their TikToker daughter, Addison Rae signed with WME in all areas.

He also has a family Youtube Channel, The Rae Family, which has a little less than 300k subscribers.

In an interview, however, Lopez disclosed how internet popularity was never on his plan. Rae’s father said he was still in the home building industry and was thinking to take a one-year break.

Then his daughter and wife came to Los Angeles and started their TikTok pursuits. It went on to become a hit and soon Monty also followed in Dec 2019.

Monty Lopez and Sheri Easterling allegedly started dating when they were in their early 20s.

For years, Monty and Sheri had an on-and-off relationship. Even after the birth of their daughter, then, 21-year-old, Sheri would live in an RV with little Addison. For a while, she remained a single mom — for much of Rae’s childhood.

Before breaking up they had first married in January 2003. They divorced after a year. It though is unclear why they ended their courtship but reconciled when Addison was six.

After that, Lopez, Sheri, and their daughter lived in Texas for about two years and then moved back to Northern Louisiana.

They patched up for good, remarried in 2017.

Monty and his wife would add two more children to their brood, namely, Lucas Lopez and Enzo. The sons also boast quite the following with combined followers of more than 600,000 followers.

Monty’s wife, known on TikTok as Sheri Nicole, has 4million-plus views per video.

Why Addison Doesn’t Use Monty’s Last Name; Is She His Real Daughter?

Those who know Addison Rae might have noticed that she doesn’t have the same last name as her father or her brothers. And to many people, this has made them wonder if Monty is actually Addison’s father.

On the other hand, her younger brothers do have Lopez as their last name.

So is Addison really not the biological daughter of Monty?

Lopez is former Hype House star’s biological father and the fact that Addison doesn’t have his last name likely has something to do with when the He’s All That star was born.

While neither Addison nor her parents have clearly stated the reasons, the theory says it is mostly because Lopez and Sheri had the future TikTok star out of wedlock. Sheri, henceforth, at the time wasn’t legally Monty’s wife.

In Dec 2020, he gave a pink makeover to his daughter Tesla Model X; The auto shop that did the makeover was RDB LA. He reportedly is a good friend of the company and himself has been a customer of RDB for a while.

The workshop previously worked on the cars of Lil Pump, Chris Brown, Jake Paul, and Offset. Monty painted her Tesla Model X to a bright new color to match her bubblegum personality.

The supposition comes in light of the fact that Rae’s father, Monty is also into the cryptocurrency industry. In June 2021, Monty Lopez and his family stepped their foot in Gryphon Digital Mining.

With an urge to look for other avenues to invest in – in addition to entertainment, the father of three and his family dived into the digital economy. He said the fact that it was the first 100% renewable Bitcoin mining company, is what intrigued him.

There’s also that contract with WME to consider when discussing his sources of income.

What’s unsettling though is there still lacks a figure that could have approximated his net worth, unlike his daughter who has been reported numerous times of holding a fortune close to $10million.