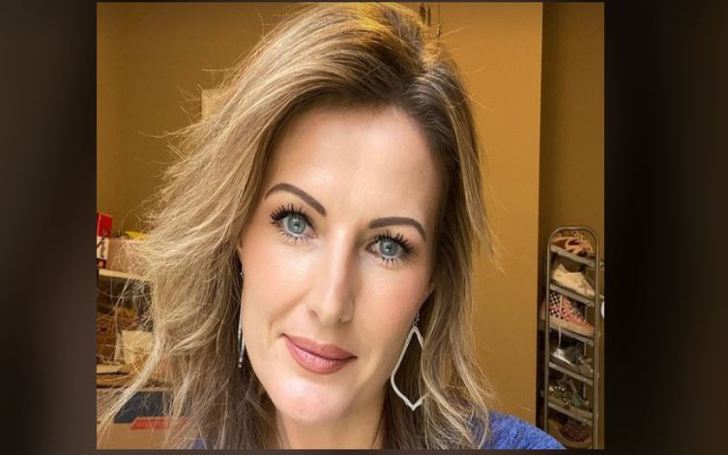 Sheri Easterling is the mother of Addison Rae, a social media personality, dancer, actress, and singer, who, as of 2022, has amassed over 85 million followers on TikTok, ranking as the fourth most-followed individual on the platform behind Charli D’Amelio, Khaby Lame, and Bella Poarch.

While Rae is clearly among TikTok’s top stars, her mother, Sheri also has a strong presence on the social media app, with 14million plus followers. And she is also notable for her own doings.

Addison’s mother dealt with lots of ups and downs, ins and outs, gone through things that others might find hard to believe. The mother and the daughter have often talked about their journey into success on their podcast; read all of them in the writings below.

Sheri Easterling Is A Small Town Girl From Louisiana

Sheri was born in 1981 in Rayne, Louisiana, a small town in Acadia Parish. It was also where she grew up mostly.

She is the daughter of father Paul and mother Mona. Unfortunately, she has not revealed much about her parents and family background so far.

In Rayne, the now 41-year-old Sheri had a retail store called De Ja Vu on the boulevard. She thought of opening her own business after living in Texas where she would visit resell and consignment shops.

Easterling had become friends with an owner in Texas and got interested in how she ran her business and in turn wanted to launch herself a venture of a similar kind.

For opening a shop in Louisiana, her father, Paul helped her.

In her podcast, Mama Knows Best, she disclosed the reason behind opening the reselling business was because she wanted to have something for herself and provide for her daughter, Addison. Her, venture, however, didn’t work out.

Before owning a business, she used to work in a veterinary office. She admits she didn’t enjoy it.

How Sheri Became A TikToker?

Sheri first began to appear on TikTok through her daughter, Addison’s account as a guest. She would launch her own profile in August 2019. In social media, Easterling is rather famous as Sheri Nicolee/Sheri Nicole.

She Also Runs A Podcast

In July 2020, Easterling and her first child launched season 1 of their podcast, titled Mama Knows Best. The season met its finale in December the same year after 25 episodes.

The first season of the podcast, which aired every Monday, provided an inside look at Rae’s relationship with her mom.

Together, the two discussed life, love, and family in addition to Sheri offering her daughter some motherly advice. In each episode, Sheri and her daughter, Rae give listeners unlimited access and a behind-the-scenes look into their life.

Is Sheri Easterling In Movies Too?

Contrary to some hearsay, Rae’s mother hasn’t had any credits in the films. It, however, is her famous daughter who made her acting debut in the 2021 film, He’s All That, a gender-swapped remake of the 1999 film.

What Other Things Sheri And Addison Rae Talk About?

On the podcast, the women of the Lopez family also talk about subjects like “dating today versus dating back in Sheri’s day.” They, in addition, explore the topics like living with parents as an adult, dealing with negativity on social media, and what it’s like to go viral. They also talk about what’s promised to be “an intimate and authentic look.”

Every week, the mother-daughter duo features big names, special guests every week to discuss relationships, family drama, fashion, and music to ultimately try and figure out…” was that actually fun?”

Sheri and Rae launched season 2 of her hit podcast, this time with the name, That Was Fun? in Sep 2021. Both the seasons of the podcast are exclusively available on Spotify. The second season’s conversations also offer a video format for fans.

Sheri first married her husband Monty Lopez on January 3, 2004. But before that, she had become pregnant with his baby and given birth to her famous daughter, Addison Rae.

A few years after the marriage, she would divorce Lopez and start living as a single mom.

In the first-ever episode of the podcast, Mama Knows Best, Sheri revealed after the divorce, Rae’s father would come around every now and then.

Sheri And Monty Lopez Started To Date Again After The Divorce

When Addison was six, Sheri again started to date her daughter’s father and within a few months became pregnant with their second child, a son, Enzo Lopez.

Even when their second child was on the way they broke things up and would reconcile again. With Enzo and Addison, Easterling lived in an RV for a while as it was what she could afford at the time.

After a while, she moved to Texas with her two kids and her husband turned boyfriend, Monty. Rae was then in the fifth grade. Texas was also where Sheri’s parents were living.

After that, Easterling, her two kids, and her husband stated to live in northern Houston and would remain there for 2 years.

When in Texas she got pregnant for the third time; it was with Lucas Lopez. Lucas, henceforth, became the only one who was born outside of Louisiana from Addison’s family.

She Went Through Financial Trouble; Her Daughter Was Bullied

In Texas, too, Sheri suffered financial instability. After living in the Lon Star state for two years, Monty got a job offer back in Louisiana but not where they used to live so the housing man and his wife along with their children moved back to northern Louisiana.

Sheri also wanted to move back to Louisiana as her daughter was facing bullies in Texas because of their living conditions.

After moving to back to Louisiana, Rae started her eighth grade. Sheri and her family started living in an apartment; they had outdoor chairs and plastic tables as dinner spots.

Even after relocating back to Louisiana, Lopez and Easterling’s daughter faced bullies. They mock her this time for not having uggs. Rae revealed through her podcast that she would come home crying explaining what happened.

After hearing this, Sheri bought uggs for her daughter which then cost about 200 and the mother-daughter duo admit it wasn’t cheap.

When Rae was in high school, Easterling and Lopez decided to remarry and walked down the aisle for the second time on January 4, 2017.

Sometime after marrying Lopez for the second time, Sheri and the rest of her family moved to Baton Rouge so that they could live with their daughter who was there for her university education.

When Her Daughter Became Famous?

Her first child hit one million followers, in October of 2019, and moved to Los Angeles in December 2019 to pursue TikTok full time. She soon became a member of the TikTok collective, The Hype House, which pushed her to wider fame.

But after her daughter became famous in TikTok, she and the rest of the family moved to LA.

Despite multiple reports and claims, the true disclosure of Easterling’s net worth is nothing but something that has been sitting on the fence for a while.

The mother of three nonetheless is certainly far from the period of financial hardship she used to go through when starting a family.

She clearly has multiple avenues of income in addition to her & her family’s recent undertaking in the cryptocurrency industry. Worth mentioning is the monetary benefits from signing the contract with WME.

While it’s quite unlikely Sheri is as rich as her daughter who has a wealth worth close to $10million, there’s no denying the assumption that she could have deep pockets.

It was Sheri who believed there was something to the platform in the very beginning when her daughter first posted her Tiktok video.

Sheri Easterling had Addison when she had just turned 21.