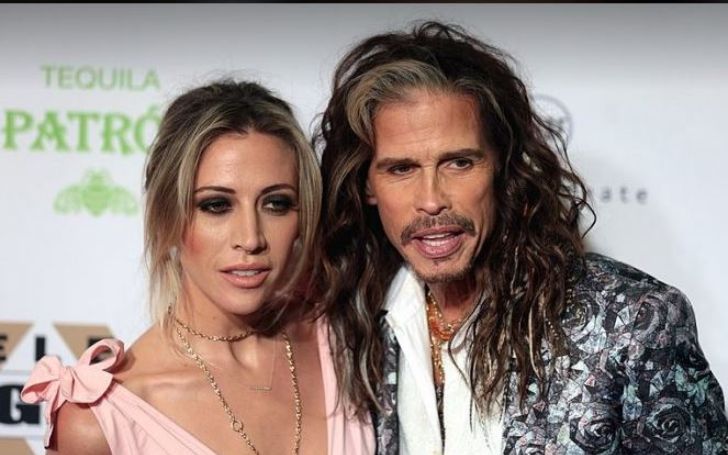 Aimee Preston fully Aimee Ann Preston is a former celebrity personal assistant who is better known as the current girlfriend of Steven Tyler, Aerosmith’s lead singer. Tyler and Aimee have an age difference of 30 years. Though that hasn’t affected their togetherness in the least.

Aimee has been dating the rockstar, Tyler since the early 2010s. Preston is quite significantly younger than the heavy metal vocalist which at times has often raised eyebrows in addition to drawing attention. The two, nonetheless, have been seemingly happy to be in a relationship with each other and uprightly in love ever since their first public appearance in early 2016.

Take a look at some of the noteworthy moments from Tyler & Preston’s relationship in addition to an exclusive rundown of Aimee’s history; who she was prior to meeting the Demon Of Screamin’. Further also get a load at her own career, what she does for a living, and others.

Aimee Preston Is From Colorado

A native of Denver Colorado, Aimee Preston was born in July 1987. Following high school, Tyler’s future girlfriend, Preston became a student at the American Musical and Dramatic Academy (AMDA), from 2005 to 2007. From there she would earn a degree in Musical Theater.

Preston who celebrates her birthday on July 18, is also an ex-student of Denver School of Arts, says her Facebook.

After graduating from AMDA, the 35 years old Preston started working for several celebrities as their personal assistant. As such, she started this career by first working for the former president, Donald Trump, precisely at Trump Organization in New York.

She reportedly also worked for Trump’s ex-wife, Marla Maples. After that, she was also a PA for the singer and fashion designer, Victoria Beckham. Working for the ex-Spice Girls member, Aimee apparently also gained experience in fashion designing and business.

Her next client would be her now-boyfriend, Steven Tyler. She initially worked at XIX Entertainment. The company also lists Preston’s partner, Tyler as one of its clients. After about one and a half years, Tyler presumably having seen Preston working at XIX, made her his personal assistant.

The Lady Marmalade singer, Christina Aguilera is also one other celebrity whom Tyler’s partner has worked for.

The Timeline Of Aimee And Her Boyfriend, Steven Tyler’s Relationship

People first started talking about the ASCAP partners awards winner and Aimee Preston’s relationship in 2014. To say more, even before that, some people had noticed them together enjoying vacations at different locations including Maui, Hawaii, and many more private trips.

They got to know more about each other after Aimee started working as a personal assistant for Tyler. By the time the rumors about their relationship started to emerge, Preston had been working for the Dream On singer for a few years.

They allegedly first met each other in 2012. Aimee happened to have just landed a job as the country rock artist’s personal assistant. In the beginning, the outsiders evidently had a hard time coming to terms with the couple’s age gap.

Back then, the 74 years old rockstar and Preston, nonetheless, remained confidential about what was happening between the two. They started to appear openly and in public events only about a year later in 2015.

Aimee was then 28 while the Cryin’ singer was already in his late 60s. They were also each other’s dates at iHeartRadio Awards in March 2015. Tyler and the ex-Trump Org employee sort of went official with their relationship when they attended Elton John’s annual Oscar Viewing Party for the Elton John AIDS Foundation on Feb 28, 2016.

Even then, as per E News!, the couple tried not to talk about what was going on, however, when they held each other’s hands, it was pretty apparent to people. The couple has since been appearing by each other’s sides be it on the red carpets, awards, or on one another’s social media.

Also, they since have not given a single concern about their age gap. By the year 2016, Tyler and Preston were allegedly in a live-in relationship residing together in Los Angeles. As per some reports they had already moved in together but at the time they were staying in Nashville, Tennessee when Tyler was recording his solo country album.

Some months after they kind of gave confirmation of their dating, rumors started to circulate about Tyler and Preston’s engagement. This especially happened in Dec 2016 when some people noticed Preston wearing a ring on her wedding finger.

Though neither she nor the Angel singer confirmed that hearsay. Such rumors once again appeared in July 2017. However, the couple this time too remained unvocal.

Even to this date, Tyler and his allegedly five-foot-eight inches tall girlfriend, Aimee have kept the details of their dating to themselves only.

And it looks like they are still in no hurry to run down the altar as in addition to speaking less about their relationship they seem virtually disinterested to share their views on weddings and such.

Preston Is Friends With All Of Tyler’s Children

Despite Steven’s now partner, Aimee being close in age to the Rock And Roll Hall of Famer’s kids, all of his children have approved of their relationship. In fact, in addition to public appearances with the hard rock artist, Preston has also shown up alongside her partner’s grown-up children.

They often show their appreciation of Tyler and Preston’s relationship in the comments section of the couple’s posts on social media. Interestingly Tyler’s actress daughter Liv Tyler is 11 years older than Preston.

Tyler, in total, has four children. In addition to Liv, he has one more daughter, Mia whom he welcomed in Dec 1978. He further has two more kids, Chelsea and Taj Monroe born respectively in 1989 and 1991.

Tyler Has Had Relationships With Several Women; What About Aimee Preston?

Both Aimee and Tyler were married to someone else before they started their relationship. Pretty much around the tabloids, Preston’s current partner, Steven has had a series of marriages and relationships over the years.

He had been married twice both of which ended in divorce. His first wife was Cyrinda Foxe from 1978 to 1987. The two began dating in 1977 with marriage following a year later. They, however, would end their courtship with a divorce that involved allegations against Tyler of abuse and others.

Steven’s next partner was a fashion designer, Teressa Barrick whom he wed in the year 1988. This union of Steven lasted quite longer than his first one, the divorce was nonetheless eminent in 2006. He was also the fiance of Erin Brady from 2011 to 2013.

Between separating from Brady and becoming the boyfriend of Preston, Tyler allegedly also had a fling with the Hunger Games actress, Leven Rambin who too was younger than the Manhattan native.

Worth mentioning is Preston’s not the first time Tyler has dated someone way younger than him. Back when the androgynous personality was 27, he was in a relationship with then 16-year-old Julia Holcomb. Preston’s boyfriend had even asked Holcomb’s parents if he could marry their daughter. This ex-girlfriend of Tyler even had an abortion when she was still in a relationship with the Love Is Your Name singer.

He also had a relationship with Bebe Buell, a fellow singer with whom he welcomed a daughter, and the Stealing Beauty actress, Liv Tyler in 1977. As for Aimee, Tyler’s existing girlfriend was formerly the wife of Scott Shachter, a talent agent. It, however, is unclear when did Aimee marry or started dating Shachter. Also remaining undisclosed are the whatevs of their separation.

Aimee as per her overtly upfront Instagram handle is also the mother of two children, a son, and a daughter. She has often posted pictures of her kids, who both are now full grown-ups, on her socials.

The Denver native, however, has not affirmed if they are her actual children at least in her own words. It is believed Preston had them with her former husband, Schacter as during one of her children’s graduation, possibly her son, Luke, Aimee addressed him as Schacter as his last name.

She allegedly also has a brother.

Again in line with her Instagram, Aimee apparently is also among the people who lost her loved ones in the tragic incident of 9/11. While she hasn’t cleared out the relationship between the four lives that lost their lives in the 2001 terrorist attack and herself, time and again, Preston never misses to mention them on her social media.

The people she lost as her close ones were the couple, Charles Falkenberg and Leslie Whittingham, and their two kids Zoe, 8, and Dana, 3. The family of four had boarded American Airlines Flight 77 en route to Canberra, Australia to enjoy their dream working vacation.

Aerosmith frontman Steven Tyler’s girlfriend, Aimee Preston also advocates for black people and their rights. She often speaks out her opinion about Blacks and other minority groups. For instance, in June 2020, the Musical Theater graduate through her Instagram showed support for black people whilst explaining to her fans why everyone should fight and stand for them.

Sharing a picture on the image sharing handle, which has since been deleted, Preston wrote,

Yes. And I will fight for you with my face…with the simple white color of my fucking skin… I will be your shield while we fight this good fight… I will protect your life with my skin until the day comes where it is safe for you to be alive inside the perfect color of yours!”

Aimee also involves herself in several giving back to the community causes. She is an active member of her boyfriend, Tyler’s charity organization, Janie’s Funds. The 35 years old once even attended Steven’s Grammy Awards viewing party in Feb 2019 that the Raising Hell singer conducted to raise money for Janie’s Fund at Raleigh Studios in Hollywood.

Preston’s Boyfriend Is A Multimillionaire; What Is Her Own Net Worth?

As one of Rolling Stones’ 100 Greatest Singers, Preston’s partner undoubtedly is one of the richest 80s artists. Active since the 70s, Tyler’s net worth has been estimated at over $100 million for decades. However, the alike proportions, in terms of his current partner, Aimee Preston are rather scarcer.

While she does not have as voguish of a career as her musician boyfriend, to tell from her Instagram, yet again, the mother of two seems quite well off on her own, nonetheless. What’s still unaccounted for, though, is the approximation of Preston’s net worth.