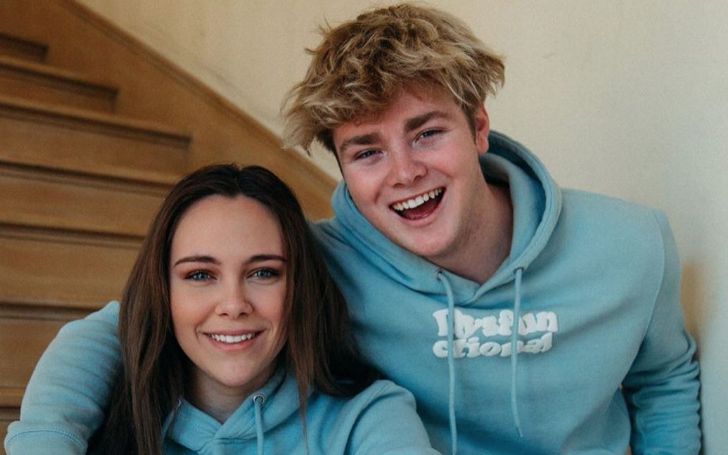 The Hype House has become a new space for YouTubers and content creators to find love. TikTok star and YouTuber Kouvr Annon is the one who found love in fellow content creator Alex Warren at the new TikTok house.

While Kouvr and Alex began dating way before the Hype House came into the scenario, their relationship simply fostered making them one of the longest unions in the house. The couple has been hugely followed on social media including Instagram, TikTok, and YouTube.

Well, where and how did they meet and begin dating? Here, we have brought to you details on their romantic relationship.

Kouvr and Alex Warren Dating Since 2018

While fellow Instagrammer Kouvr and Alex are assumed to be dating for a long time, their relationship came into public notice after they began posting each other’s photos on their Instagram.

Ever since the duo admitted their romance, they have been highly adored and appreciated for the bonding they share. In fact, the two often mention one another’s name and are pretty expressive of their love on their respective vlogs and posts.

Moreover, they also make appearances together on TikTok and are usually seen traveling together to different places.

While their socials are one thing that reflects their relationship, their actions are also pretty suggestive of their romance.

Kouvr Moved to California to be With Her Boyfriend Alex

20 years old Kouvr could not stop herself from moving to California from Hawaii to be with her boyfriend Warren.

Soon after Alex was invited to the Hype House in LA, Kouvr decided to move to California primarily to be with Alex.

In one of Alex’s videos was titled something we need to tell you, he candidly spoke about his girlfriend Kouvr’s decision to move to California. In fact, he was glad enough to say that Kouvr loves him enough to travel 3000 miles just to be with him.

Here is the timeline of their relationship that better explains their love.

Though Alex and Kouvr had been together for a while, Kouvr first admitted their relationship on December 23, 2018. Back then, she uploaded their picture on her Instagram with a beautiful caption that perfectly hinted at their romance.

“My lil weirdo❤️ You’re stuck in the desert w/ only one person… Tag who you’d pick!!🌴”

Soon after, Alex too made a move and posted the same picture on his Instagram.

On January 26, Alex suddenly decided to fly 3000 miles to surprise his girlfriend, which he posted on his vlog on YouTube. Alex who secretly developed the idea with Kouvr’s roommate at the time suddenly popped up by her at the beach, which he recorded in a video.

Like we have mentioned above, Annon and Warren candidly discuss Kouvr’s decision to move to LA in one of his videos. Well, before announcing her decision, Alex starts the video saying “Long-distance relationships are hard.”

Yes! This is about their marriage. In one of Alex’s YouTube videos where he along with Kouvr had a short Q&A session. Well, the couple completely avoided the question of their marriage and kids. However, they were candid enough to say that they were not getting married anytime soon.

“We’re 19! Everyone keeps commenting, ‘Get married.'” Then he jokingly says, “So, we’re getting married,” but we might have to wait a while for those wedding bells to ring”

Like any other couple, they too had a memorable valentine’s day. While they did not reveal all they did that day, Alex was humble enough to post a photo of him kissing Kouvr at the Disneyland castle.

Undoubtedly they are the best couple and look pretty cute together.

Did Kouvr and Alex Break Up?

Recently one of Alex and Kouvr’s friends Dayna posted a video on YouTube where she alleged how Kouvr apparently cheated on Alex with her then-boyfriend. The video has since sparked rumors of Alex and Kouvr’s breakup. But the truth is they have not broken up and are still madly in love.

In the video by Dayna, she talked about how Alex and Kouvr came to become friends on Snapchat and eventually began dating.

As per Dayna, Kouvr was still dating a guy named Tyler when she started talking to Alex. She also alleged that they were still together when Kouvr and Alex officially chose to date.

Later, Alex who came to know that Kouvr was cheating on him with Tyler reportedly put a condition to Kouvr where he asked he would only be together with her if she breaks up with Tyler. Well, Kouvr did accordingly and have been together ever since.

Even though Alex agreed to what Dayna said, he stated it was back when they had just begun dating. He added that he was happy with Kouvr at present.

Besides, he hugely criticized Dayna for her action saying it was none of her business to interfere in their love life and put it in public. In fact, he even alleged that she was doing all these for views and attention.