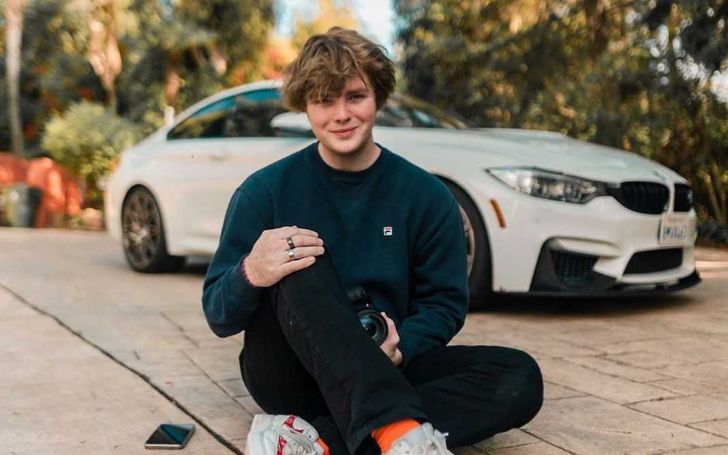 Alex Warren is a YouTuber, TikTok star, and an Instagrammer who went viral after his move to The Hype House, an LA-based space for content creators. He is famous for his presentation style, mockery, and comedic skill in his videos.

Besides, he is also a skateboarder that he often flaunts in his TikTok and Instagram videos. He has over 979k followers on his Instagram where he uploads all of his contents under the hashtag #WarHeads.

Alex was born in Carlsbad, California, in an American family. He also has younger siblings Ashley and Grant.

While the details about his parents are still unknown, his father reportedly died of cancer when he was just 9.

Talking about his nationality and ethnicity, he is white-American.

How Old is Alex?

As mentioned above, Alex is a social media influencer with huge followers on Instagram, TikTok, and YouTube.

He has over 979k followers on his official Instagram account where he goes by the name @alexwaarren. Similarly, his TikTok sits pretty high with 8.6 million followers whereas his self-titled YouTube channel has 1.04 million subscribers.

As an influencer, he usually takes a comedic approach to create contents that usually involves his girlfriend Kouvr Warren and his close friends from The Hype House, a collaborative TikTok group.

With his popularity rising rapidly in 2018 and 2019, Warren also got into a few controversies. Following his entry into The Hype House, he was slammed brutally for allegedly copying Slovak YouTuber David Dobrik.

In fact, David’s fans even accused him of imitating his laughter, thumbnails, video lengths, and even content ideas.

Well, in an interview with Insider, he answered all the criticism he received saying he is a fan of David but never tried to copy him. He added,

“It doesn’t help that I have a similar laugh to David, I don’t watch David Dobrik anymore because of the mere fact that I’ve been accused of copying his mannerisms and personality.”

As of 2020, Warren is in a relationship with a fellow influencer Kouvr Annon. They have been dating since 2018 and they publicly announced their relationship via an Instagram post in December 2018.

Here is the funny video of Alex with his girlfriend.

The two have since been together and are often seen on one another’s TikTok and Instagram posts.

On Valentine’s Day 2020, Alex even uploaded an Instagram photo of him kissing his girlfriend Kouvr.

They live together in LA

In March 2019, Kouvr who lived in Hawaii moved to LA-based The Hype House to be with her boyfriend Alex.

In one of his videos, Warren candidly opened up about Kouvr’s decision to move to LA. He also admitted that it was difficult to be in a long-distance relationship.

What is Alex Warren’s Net Worth?

Alex has a net worth of $3 million, as of 2021. He primarily makes money as an influencer which comes through sponsored posts on his Instagram, TikTok, and YouTube.

He also generates huge revenue from ads on his YouTube channel that has over 1 million followers. Just for a fact, the social media star Warren drives McLaren and also owns a mansion as per the reports by Forbes.