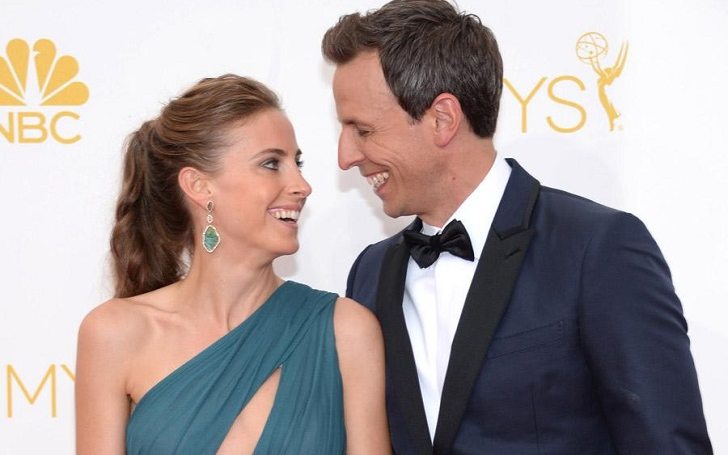 Alexi Ashe is a human rights lawyer who gained popularity as the wife of Seth Meyers, the Late Night with Seth Meyers‘ host. Seth widely known for his light-hearted jokes made a major breakthrough following his long appearance on NBC’s Saturday Night Live. Besides his multiple roles on the show, the successful comedian worked as a head writer for the late-night live TV show too.

The entertainer also maintains a successful marital life with his wife Alexi. Let’s know who is Seth Meyers’ wife? and their years-long commitment and a lot more about her career and family background.

The couple first met while they both were guests at Chris Kattan‘s wedding with model Sunshine Deia Tutt in June 2008. Alexi attended the ceremony with her sister Ariel Ashe, a designer at SNL.

Meyers told Your Tango it was love at first sight for him,

“Yes it was. I had a sense that she was the closest I’d ever met to someone who I could see myself with. Pretty much right away.”

Their love quickly blossomed and a happy couple never looked back since.

Meyers proposed Ashe with the help of their pet dog

The former NFL host proposed Alexi in the extremely sweet and thoughtful way in mid-2013. Seth told Jimmy Fallon of his engagement story, explaining the pair’s dog Frisbee‘s role on their big day.

The comedian said that his then-girlfriend arrived home later than the expected time from her job. And he’d already tied the ring onto their dog’s collar. He stated,

I tied [the ring] in a bow around our dog’s collar… I just had to sit there looking at the dog. I was like, ‘The dog’s going to eat the ring.

Thankfully, the ring was safe and everything ended smoothly. They later started planning for their wedding.

Alexi and Seth married in Sept 2013: She got sick two days before the nuptials

The duo tied the knot on 1st September 2013. However, just a couple of days before the ceremony, a health complication struck down Alexi. According to Vogue, Alexi suffered from food poisoning. She was very sick on their special day and nurses even advised the couple to postpone the wedding.

Thankfully, the Chicago Bears doctor, Adam Bennett was also one of the wedding guests. And eventually, the big event ended peacefully.

SNL writer John Mulaney revealed the dramatic events in an article for The Fashion Bible,

The nurse was wrong. Adam Bennett, the team doctor for the Chicago Bears, was a guest that weekend, presumably in case there were any head injuries when the bride and groom danced the hora. Bennett gave Alexi NFL-style treatment, and she walked down the aisle brave and beautiful.’

Despite her illness, Alexi looked gorgeous in a custom gown designed by Carolina Herrera. On the other hand, her groom donned a Ralph Lauren Black Label suit.

The holy matrimonial took place at Chickemmoo Farm on Martha’s Vineyard, Massachusetts. The ceremony became more special after the country music star Brad Paisley sang the song ‘Then’ for their wedding dance.

Their pre-dinner party was organized at Beetleburg Farm House.

The couple has two sons: Their second child was born in an apartment lobby

Seth Meyers and wife Alexi Ashe are proud parents of two children. The two welcomed their first child, a son named Ashe Olsen Meyers on 27th March 2016 at Lenox Hill Hospital. They arrived at the hospital just twenty minutes before his birth.

Their son’s first name ‘Ashe’ was given in the honor of his mother Alexi’s maiden name while his middle name ‘Olsen’ was inspired by Seth’s mother’s maiden name. The duo announced they were expecting their first child in November 2015.

His wife Meyers gave birth to their second child Axel Strahl on April 8, 2018, in a very unlikely location, their apartment building lobby.

His arrival was quite unexpected. The contractions began in their apartment and just as they reached the lobby the baby’s head was almost out. Meyers had called 911, nevertheless, the baby was born even before the call was hung up.

Just a minute after Axel’s birth, the New York Police and Fire Department arrived. They helped in cutting the umbilical cord. Furthermore, the couple’s neighbors also helped out by putting towels in the dryer to keep the baby warm.

Their baby’s middle name is inspired by Alexi’s grandparents.

Where does the couple live?

Meyers and his life partner Ashe currently resides in a Greenwich Village apartment with their two adorable children and pooch. The comedian bought the 3,200-square-foot duplex back in 2016 for $7.5 million.

Alexi is a human rights lawyer. She first landed the job as a policy and research analyst at the Los Angeles City Attorney’s Office in March 2007. She worked for the office until April 2009. During her time at the office, she developed a gang prevention curriculum for middle school pupils and also participated in many other major endeavors at the time.

In April 2011, Ashe began working as a legal intern at Somaly Mam Foundation and crafted her skills working with some known attorneys in sex trafficking cases.

Moreover, Ashe also did her legal internship at Human Right First (Dec 2011-Feb 2012). She designated as legal counsel and compliance at AC Investment Management in April 2012. She worked there until Dec 2012.

In Jan 2013, Ashe became the grants writer of the World Wide Orphan Foundation and also pursued her legal internship side by side. She organized fundraising events for the foundation.

Alexi is an advisory board member of Journeys in Film since Jan 2013. She also rejoined King’s County District Attorney as an assistant district attorney in July 2013. Some sources reported that she left the job in 2018 and joined Sanctuary for Families. But, as per her Linkedin bio, she is still working for King’s County.

The couple’s great job inside and outside the home

Alexi and husband Seth are busy with their professions and are still doing a great job maintaining their love life and other endeavors hand in hand. The Late Night host said that his wife’s job against sex trafficking is more demanding and challenging.

In a 2012 interview with Elle, the then future-husband of Alexi also explained some essential marriage tips he learned from his parents’ relationship. He said,

Half the time parents are showing you how to do it, and then the other half they’re showing you the things you should never do. My mother is an incredibly beautiful woman who has laughed at every single thing my father’s ever said. At a young age, my brother and I understood that if you can make girls laugh, you can punch well above your weight class.

In 2002, Alexi Ashe attended Occidental College, in Los Angeles, California. She earned her Bachelor of Arts degree in political science and government from college in 2006. She later enrolled at Southwestern University School of Law, graduating with Doctor of La (JD) in International Human Rights in 2011.

Ashe was born in 1983, in New Mexico. She is the daughter of Thomas J. Ashe and Joanne Ashe. She grew up with her two siblings, a brother Tolya Ashe and a sister Ariel Ashe.

Her brother is a private chef.