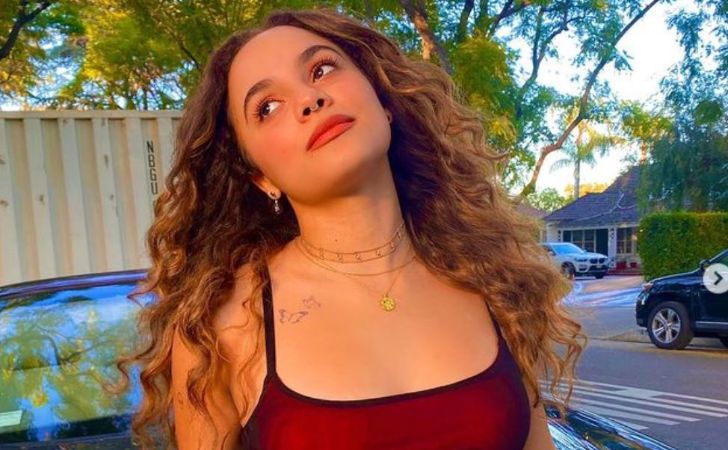 Sienna Ribeiro is the daughter of actor, director, and comedian Alfonso Ribeiro and his ex-wife, Robin Stapler. Unlike her father, she is not into movies, but she is quite active on TikTok. She is famous for her famous lipsync videos and her perfect dance moves which she flaunts on her TikTok account.

Born in a celebrated family, Sienna has gained immense fame at an early age. Well, what about her love life? Is she dating a boyfriend? In this article, we are going to talk about some interesting facts about her career, relationship with her parents, & other facts.

Who Is Sienna Ribeiro?

As we said earlier, Sienna Ribeiro is a TikTok star and a social media personality. She was born on October 7, 2002, in the United States. Born as the oldest kid, she is the daughter of father Alfonso Ribeiro and mother Robin Stapler.

Talking about her education, Sienna finished middle school in 2017 and completed her graduation in 2021. In fact, her mother Robin even posted a beautiful photo of her daughter from the graduation day.

Well, born in a well-to-do family, Sienna enjoyed her childhood and is doing pretty well as a teenager as well.

Sienna Ribeiro Siblings: She Is The Oldest Of All

18 years old Sienna does not have biological siblings but she has two half-brothers Anders Reyn Ribeiro, & Alfonso Lincoln Ribeiro, Jr., and a half-sister Ava Sue Ribeiro.

All her half-siblings are born from her father’s second marriage. Despite the fact that they are not her biological siblings, she shares a great relationship with all three of them.

In fact, she has made numerous appearances with her siblings.

Her Father Is Married Twice

Well, Sienna’s father Alfonso is married twice. His first marriage was with her mother Robin. They reportedly married on 20th January 2002, almost three years after their meeting.

They reportedly met back in 1999 on the sets of In the House. Their meeting soon turned into a romantic relationship after Alfonso asked Robin out for a date night. However, their relationship did not last for very long.

Almost after five years of marriage, the duo filed for a divorce at the Los Angeles Superior Court on August 9. Their divorce was finalized on 19 February 2007.

Alfonso married for the second time to his wife named Angela Unkrich. Their wedding ceremony was held on October 13, 2012, almost three months after their engagement. It has now been over 8 years since they married and they’re doing pretty well in their marital relationship.

Sienna Ribeiro Lived In a Joint Custody After Her Parents Divorce

Divorce has almost become inevitable, especially among the celebrity. And the case was the same for Sienna’s parents. While the divorced couple moves on in life, their kids are who suffer the most. However, in the case of Sienna Ribeiro, her parents took care of that as well.

Following their split, Robin and Alfonso had joint custody of Sienna. Thus, she is close to both her father and mother and shares a great relationship with both of them. In fact, she loves to spend time with her parents and there is a number of photos of her together with her parents on her socials.

Well, hopefully, their bonding continues in the days to come as well.

Who Is Sienna’s Father Alfonso?

As we mentioned earlier, her father is not only an actor but also a director, and comedian. He made his debut as an actor in an uncredited role back in the 1980 movie OYE Willie. Following this, he appeared in a TV series Silver Spoons from 1984 to 1987. He was a series regular and appeared in a total of 72 episodes.

Some of his other work as a director includes All of Us, Shake It Up, Young & Hungry, K.C. Undercover, to name a few.

Is Sienna Ribeiro Dating a Boyfriend?

Going by Sienna’s Instagram posts, it looks like she is dating a boyfriend. While she has not publicly opened up about her relationship status, she is with a guy who she possibly dating. Though she has not revealed the name of the guy, she has posted a number of photos with him, which reflect the kind of relationship they shares.

Back on June 22, 2017, she shared a beautiful with her guy where they were hugging each other. Hopefully, she opens up more about her relationship with the guy in the future.

Anyway, we wish her the best of luck in her love life as well.

Not many know but Alfonso’s daughter Sienna is a party animal. She enjoys nights and parties. She is out with her friends every now and then. Well, for a girl of her age, party and night outs are pretty much obvious.

Well, there are a number of photos of her with her friends on her Instagram which show her love for parties and music.

Like most of the star kids, Sienna is also a big fan of social media, especially Instagram. She is pretty much active on the platform and has over 4k followers.

Well, via her posts, she pretty much gives insight into her personal and professional life. Further, she is also on TikTok and has made decent followers. Besides, though, she has not taken acting seriously, she has appeared in a short movie named Unwritten.

Sienna is still young and does not earn money of her own. However, her father is pretty wealthy with a net worth of around $10 million as of 2021. With her father’s massive wealth, she enjoys all the luxuries & leads quite an affluent lifestyle.