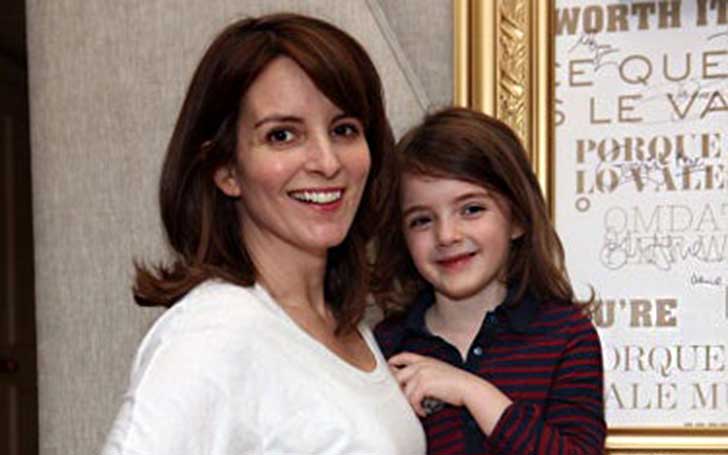 Alice Zenobia Richmond is an American child artist and star kid. Besides her acting gigs, Alice is also famously known as the older daughter of actors Jeff Richmond, and Tina Fey. Alice has worked on a couple of projects so far and has made her own name rising above the star kid tag.

The older daughter of Jeff and Tina is in her teenage. So a number of her followers, are eager to know if Alice has already entered into the dating game. But, she hasn’t yet opened up about her relationship status. Furthermore, her parents don’t readily talk about their children in the media.

So, in this article, let’s talk about Alice’s childhood days, her relationship with her parents, her love life, and more.

Alice Zenobia Richmond Was Born In 2005

Alice Zenobia Richmond was born to father Jeff Richmond and mother Tina Fey on September 10, 2005. Back then People reported the birth of the first child of the SNL stars and also mentioned the baby girl weighed 5 lbs and 7 oz. Alice’s mother was 35 while her father was 44 at the time of her birth.

Jeff, the SNL anchor had announced the upcoming arrival of her first child in April that year. In spite of the fact that she was pregnant with Alice, she continued to present on the show through the season finale on May 21.

Alice is an American citizen. She has English, German, Irish, and Scottish ancestry from her mother’s side.

She has a Younger Sister Who is Also Acting

More than five years after Alice came into this world, she got a wonderful gift from her parents. And she is none other than her younger sister, Penelope Athena Richmond. Penelope was born on the 10th of August 2011.

The young girl of age 9 has already made her way into the acting world. She made her debut in 2015 in the series Unbreakable Kimmy Schmidt. In 2021, Penelope made her appearance in the musical, Girls5eva.

Richmond was just around seven years old when she did her first acting work. In 2012, she appeared as a seven-year-old girl, Liz in the TV series 30 Rock. Nearly eight years later, Alice appeared as herself in a TV special, A One-Time Special.

Her Parents Are Married for Two Decades

Alice’s parents have been leading a happy conjugal life for over two decades as of 2021. Besides, it has been over 27 years since the couple started dating which is back in 1994. Jeff and Tina tied the knot on June 3, 2001, in a Greek Orthodox ceremony.

People reported the pair dated for more than seven years before they walked down the aisle. They reportedly met while they both were at Second City. They soon hit it off and started going out. Their affair soon turned into a serious relationship.

In the starting phase of their relationship, they attracted several eyes to themselves due to the anomaly in their heights. Actress Tina stands 5 ft 4 inches tall while her husband, Jeff is just 5 ft tall. However, irrespective of their physical difference, they have made an adorable couple of themselves. And in the 27-year-long romance, their love for one another has only increased.

Alice Zenobia Richmond’s Mother was Slashed in the Face

If you have been following Tina Fey for some time, you might have noticed a few inches-long scar on the left side of her chin and cheek. Well, the actress had been keeping the reason for the huge scar a secret for a long time. She only revealed it to Vanity Fair in 2009. She subsequently disclosed it in her autobiographic book as well.

With the outlet, Tina revealed that during her spring semester of kindergarten, she was slashed in the face by a stranger in the alley behind her house.

Her Mother Has Appeared In Dozen of Movies

Alice Zenobia Richmond’s mother Tina Fey has appeared in dozen of movies and TV series. She is not only an actor but a comedian, writer, producer, and playwright as well.

Talking about her acting career, she made her debut in 2002 in the movie Martin & Orloff. This was followed by her appearance in Mean Girls, where he played a character named Ms. Sharon Norbury, also a screenwriter.

She has since been part of movies like Artie Lange’s Beer League, Baby Mama, Muppets Most Wanted, Whiskey Tango Foxtrot, Sesame Street, & others. In 2023, she is set to appear in A Haunting in Venice, and a few other TV series as well.

What’s Her Net Worth?

Alice Zenobia Richmond is just 15 years old and she is still finding her passion in acting. By far, she has made two small appearances on television series which might have paid her well. However, her exact payment is not revealed. Moreover, her net worth is not revealed as of yet.

Talking about their real estate property, the husband-and-wife splurged $3.4 million for an apartment on the Upper West Side in New York City. Likewise, in January 2016, the pair paid a whopping $9.508 million cooperative apartment in New York.

The apartment covers approximately 3,000 square foot area and it has 3-4 bedrooms and 4.5 bathrooms. As per variety, the apartment is located directly above an equally sized apartment we mentioned above.

She is not on Social Media

Alice Richmond will turn 16 in September this year but she hasn’t yet found her interest in being on social media. It’s pretty rare for the star kid who has already made an acting debut not to be on socials. As a matter of fact, her parents don’t indulge in sharing their lives on social media as well.

Meanwhile, there is an Instagram account named “tina_fey_official” which has around 48k followers as of 2022. The account is not verified and in its bio is written: “I am an actress.” Interestingly, the account was opened on January 2, 2014, and the account doesn’t seem to be active ever since that day. The user if not Tina herself shared 13 posts the day account was opened and after that, not a single post is shared.