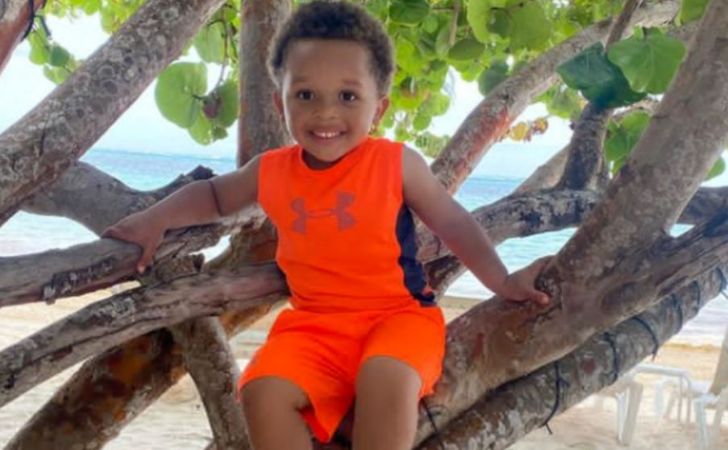 Camidas Swain Newton is the son of a football quarterback, Cameron Jerell Newton (Cam Newton) who is known for playing his first nine seasons with the Carolina Panthers of the NFL. He is the third child of Cam and his former girlfriend, Kia.

Camidas’ footballer father, Cam Newton, is a Heisman Trophy winner who became the first overall pick in an NFL draft within a one-year span. Swain is one of the four children of Cam and his former girlfriend, Kia Proctor.

Swain’s parents couldn’t keep their union intact and now are ultimately living life on their own with their children being the only bridge between them. So know where Camidas stand amidst the separation and who is he getting to spend the time with most. Also, know how his father is doing post his split with Swain’s mother.

Camidas Swain Newton Was Born Into The Family Of Footballers

The third child of footballer Cam Newton and Kia Proctor, Camidas Swain Newton, was born on July 6, 2018. He is the grandson of Jackie and Cecil Newton Sr.; the latter played as safety for the 1983 Dallas Cowboys and 1984 Buffalo Bills.

Camidas’ uncle and his father’s younger brother Cecil Newton was a center who played for the Jacksonville Jaguars. His other paternal uncle, Caylin, was the quarterback for Howard Bison in the mid-2010s.

Swain’s parents took it a while before revealing the first picture of their baby to the world. Kia uploaded a series of photos to her Instagram account, where Cami is sleeping adorably in the first three shots.

Add to that, the fourth and final pic showcases his big old smile and happy eyes. Kia ultimately ended the Insta carousel with a video of both she and her son sporting Snapchat filters. The former girlfriend of the NFL star kept referring to little Camidas as a momma’s boy and said he looked just like her.

Camidas’ mother, Kia or Erika Proctor, is a model and a former stripper from Maryland. Proctor used to work at Washington Stadium DC Club under the name, Hazel. Camidas’ mom now identifies herself as an Ig model. She moved to Atalanta and began working as a party hosting Socialite.

Proctor, born, October 16, 1988, was born in Virginia and is the daughter of Anne Maria and Jerome Proctor.

She started dating the current New England Patriots quarterback in 2013. The pair first appeared together at the Kentucky Derby Red Carpet in 2013. It, however, was in 2014 at the 2014 NFL Honours that the parents of Camidas Newton announced that they were indeed dating.

In January 2020, Blast reported Cameron’s split from his longtime girlfriend Kia Proctor after having a baby with Instagram model La Reina Shaw.

The outlet then revealed Swain’s father, Cam had been seeing La Reina Shaw for some time and the two even had a baby named, Caesar over the summer. The IG model reportedly lived in an Atlanta apartment directly above the NFL star’s restaurant Fellaship. People had also caught them celebrating New Year’s Eve together. What’s more, Shaw had also posted a photo from Cam’s ATL restaurant. She, herself has a son, Jaden, born to her from her former partner.

Swain’s biological parents, Cameron and Proctor parted ways in late 2019 after the news of the latter’s cheating hit the media’s knowledge.

Camidas Swain Newton’s Parents Fought Each Other For His Custody

Camidas became the coveted prize of the tug of war that his parents played against each other during the first years of his life. His father Cam filed for joint custody and battled in court with his baby mama Kia Proctor.

Camidas allegedly never got to live with his quarterback father. Hence his father asked for paternity, joint custody, and visitation. He even asked the court to evaluate how much child support he has to pay.

Kia, on the other hand, sought sole custody, child support, and attorney fees. She wanted child support above the guidelines owing to the knowledge that Cam was earning a $60 million guaranteed salary in addition to countless endorsement deals. Proctor also wanted the former Carolina Panthers player to pay $15,000 for her to hire a forensic accountant to examine his finances.

In the docs, Camidas’ mother revealed she had been living away from Cam for months. She said she had been planning to move back to her native Maryland while Cam wanted to stay in Atlanta.

As mentioned, Camidas Swain Newton is not the only child of Cameron Jerrell Newton. Swain has three other siblings, brothers Chosen Sebastian Newton (2015), a sister named Sovereign-Dior Cambella Newton (2017), and Cashmere Newton (2019).

Additionally, he has an elder half-sister named Shakira, born from his mother’s past relationship. Newton and his sibling spend a lot of time along with their father. The Newtons occasionally go on trips. Due to his father’s current relationship with Shaw, Swain is also the half-brother of Caesar.

Camidas’ Father Doesn’t Want His Son To Be Like Him

Although Cam loves being a dad to all of his children, he doesn’t want them to grow to be like him.

“Don’t be like me, son. Be better than me. You don’t have to be an athlete to be accepted by me. You can be whatever you want to be. But whatever you decide, I challenge you to be the best.”

Although he may not have said the same sentiments to each of his children, it goes without saying, the Georgian footballer wants all of his kids to abide by the same principle, including Camidas.

How Financially Secure Camidas Swain Newton Is With Each Of His Parents?

Only time will tell if former couple Cam and Kia are done for eternity or is there still a chance for reconciliation. But as of now, it looks like Swain is going to have two families, one his millionaire footballer father and the other his social media star, mother. Whoever he ends up with, one thing that is hardly disputable is the fact that the three-year-old’s future and nurture he might be receiving could be as warm as anyone could wish for.

Newton’s father, Cameron is currently on a one-year deal with the Patriots for a base salary of $1.05 million, but it’s possibly worth up to $7.5 million thanks to incentives. Not to mention his net worth standing north of $70million.

And while Swain’s mother, Proctor’s financial details/net worth is yet to be revealed, she could very comfortably raise her children including Camidas with all the needs checked and more — all on her own. She is believed to have created multiple ventures but has been doing visibly good as a glamour guru.