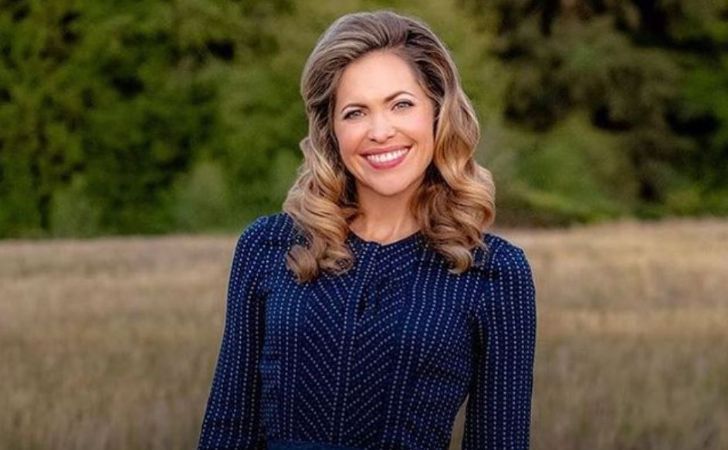 Pascale Hutton is a Canadian actress most famous for her roles as Rosemary Coulter in When Calls the Heart. Besides, she has also appeared in a few other movies & TV series like A Simple Curve, Dead Like Me, Reunion, & others.

Though she is primarily famous for her professional accomplishments, she is also often in the media for her personal life. She is a married woman and leads a beautiful relationship with her husband Danny Dorosh. Moreover, there are a lot of curiosity surrounding her relationship with her co-star Kavan Smith. What’s the truth?

Well, here you can find out everything about Pascale Huttone’s career, kids, relationships, & much more.

Who Is Pascale Hutton?

Like we said earlier, Pascale is a Canadian actress by profession. She was born on June 14, 1979, in Creston, British Columbia, Canada. Growing up with hippie parents, Pascale had a pretty much a nomadic childhood.

Her early days included a lot of traveling along with swimming in the Goat River, playing with chickens, and wandering in barns & fields. However, most part of her childhood days is not known in the media industry.

Talking about her education, she did her schooling in her hometown. To pursue her passion for acting, she attended the University of Alberta in Edmonton.

Hutton has been into acting for years now and has already appeared in dozen of movies and TV series. She made her acting debut back in 2003, where she appeared in a TV series named Hollywood Wives: The New Generation.

This was followed by her work in The Days, Dead Like Me, & Life as We Know It in the years 2004. Besides, she has also been a part of some long-running TV series like Royal Pains, Sanctuary, Arctic Air, When Calls the Heart.

Talking about her movies, she made her film debut in 2004, with a movie named Ginger Snaps 2: Unleashed where she played a character named Beth-Ann. Following this, she appeared in some prominent roles in movies like A Simple Curve, The Art of War II: Betrayal, Shred, Cats & Dogs: The Revenge of Kitty Galore.

Her most film appearance was in S.W.A.T.: Under Siege. In the 2017 movie, she played one of the leads named Carley.

In her decades-long career, Pascale has appeared in dozen of movies and TV series. However, she is most recognized for her work in the series named When Calls the Heart. In the series, she plays a character named Rosemary LeVeaux Coulter, a flamboyant, enthusiastic actress from New York.

As per the reports, she has been a regular cast in the show since the second season which was in 2015. The Canadian-American TV series is inspired by Janette Oke’s book of the same name.

As per the reports, the show first started airing on the Hallmark Channel in the United States on January 11, 2014, and eventually in Canada on April 16, 2014, on Super Channel.

The series also stars some of the most successful actors like Martin Cummins, Jack Wagner, Pascale Hutton, & Kavan Smith, among others.

Pascale Hutton Is Married To Her Husband Danny Dorosh

In case you didn’t know, Canadian actress Pascale is a married woman. She is married to her husband named Danny Dorosh. The couple walked down the aisle on September 6, 2002, in a beautiful wedding ceremony. At the time of their marriage, both the duo were new to the entertainment industry.

As of 2021, the husband and wife are together for over 19 years and they are still passionately in love. The couple is apparently very loyal to each other and there are no reports of extramarital affairs between the two.

Hopefully, their marital relationship continues in the days to come.

She is a Mother Of Two

From her marital relationship, Pascale has become a mother of two children. The couple has two sons, however, they have not revealed their birth details.

Both her son are extremely close to her and their father Danny as well. In one of her interviews, Hutton even stated how close her kids are with their father, saying her “kids love their dad Danny to death.”

Well, despite being such a famous personality, she has kept her kids away from the media and limelight. So far, they have barely made any public appearances.

Hutton’s Husband Danny Is Very Supportive of Her

Unlike most celebrity husbands, Hutton’s husband Danny is very supportive towards her in both her personal and professional life. Along with taking care of her emotionally, he assists Pascale all the way so that her professional career is not hampered.

As per the reports, Danny gladly takes care of his kids and other household things. Talking about her husband’s support, Pascale once stated,

I have an incredible support network who helps maintain the balance of our household when things are crazy and I am working a lot. My husband is the most incredible man in the world.

Besides, as a wife, Pascale is also a very responsible wife and tries to cut traveling as much as possible to give time to her husband and kids. Talking about the same, she once stated,

I know, it is true. And this business does pose a lot of challenges for families. But I’ve also made quite a conscious decision to try to keep all of my work local. In my earlier days, before kids, I would travel a lot more for work. Now if a job comes up that is in Vancouver, it’s automatically more appealing to me than one that is going to film elsewhere because your kids need you. They need YOU. There’s no substitute for you. There’s no substitute for your time, your presence, your love. There just isn’t. Being home and being present with them is the most important thing.

Like Hutton, her partner Danny is also a former actor. He has appeared in a few movies and TV series but has lately quit the movie industry. She made her film debut in 2004, in the TV movie named It Must Be Love.

There have often been rumors of Pascale and Kavan’s romantic relationship. But are they dating? Well, the fact is they are not dating but are really good friends on screen and off the screen.

The rumors of their romantic relationship began because of their onscreen chemistry in the Hallmark series When Calls the Heart. In the series, Hutton plays Rosemary, whereas Kavan plays her romantic partner Leland Coulter.

The onscreen couple is not dating in real life but is good friends.

Pascale Hutton is a successful actress and has been doing pretty well professionally. Talking of her net worth, she is estimated to have somewhere about $5 million.