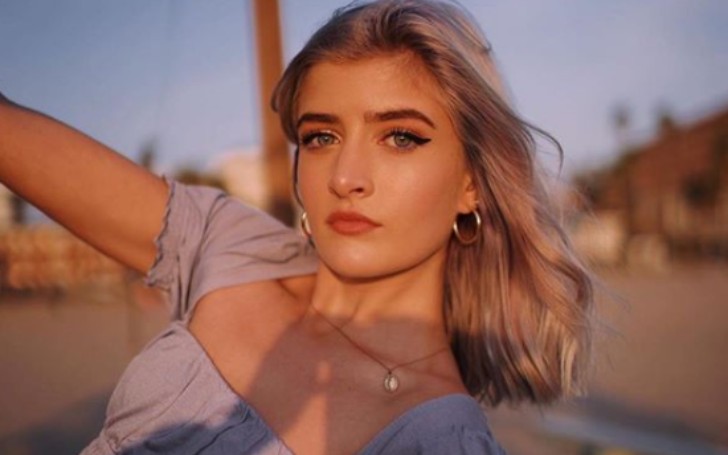 When you are a star kid everything you desire is within your grasp. However, sometimes your parent’s tirades could result in a terrible life. Similarly, Charlie Sheen and Denise Richards‘ daughter Sam Sheen had to go through some issues because of her famous dad.

Well, it’s all in the past now and Sam is all grown up. She turned 16 this year and fans are curious to know about her personal life. Today we’re going to give all the insight into her the lives of Denise and Charlie’s daughter.

Sam Sheen: An insight into her childhood and education

The star kid Sam was born on March 9th, 2004, in Los Angeles, California. While Sam is the first child for Denise, she was second for Charlie. He became a father for the first time in 1984 when his high school girlfriend gave birth to Cassandra Jade Estevez. From his oldest daughter, Charlie even has one grandchild.

She spent the majority of her childhood in Sherman Oaks, California alongside her baby sister, Lola Sheen. Sam and her little sister studied at Viewpoint High School until 2013 before moving to Beverly Hills with her mother. At the time, her mom Denise had already divorced Charlie and both Sam and Lola used to live with her.

Later on, Sam enrolled in a private high school located in Beverly Hills. Given her age at the moment, she is most probably in her senior year.

Meanwhile, Sam’s mom and dad divorced in 2006 due to her father’s alcohol and drug abuse. Initially, they exchanged vows on June 15, 2002.

She has one biological sister, Lola Sheen, born in 2005. Lola is currently 15-years-old. Apart from Lola, Sam has two sisters. One Cassandra Jade Estevez, whom Charlie shares with his high school girlfriend, and another, Eloise Joni Richards, whom her mom adopted.

Apart from them, she has two half-brothers from her dad’s side, Bob and Max Sheen. Charlie shares them with his ex-wife Brooke Mueller. He was married to her from 2008 to 2011.

Besides, Sam currently enjoys life with Denise, Eloise, Lola, and her step-dad, Aaron Phypers. Her mom married Aaron back in 2018. They have been dating since 2017. Although Aaron does not share any biological kids with Richards, he is happy being a father to his step-daughters.

Sam’s dad Charlie wasn’t around while growing up

It’s a terrible thing for any kid, be it star or not, to have a childhood without a father. When they grow up, it is probable they’ll have issues. Likewise, Sam’s rarely spent some quality time with her father.

A divorce between the couple doesn’t necessarily mean you have to stay away from your kids. Lots of celebrity parents, despite being divorced, are co-parenting their kids. They know a child needs both of her parents. Nevertheless, Sam wasn’t quite lucky in this aspect. After Denise and Charlie divorced, both of them shared custody.

However, because of Charlie’s erratic behavior, he was rarely around his daughters. In a confessional episode of Real Housewives of Beverly Hills, Denise revealed how their daughter can develop ‘daddy issues.’

She stated, “There’s a lot that the kids don’t know about their dad, and I want to keep it that way.”

In addition, Denise also divulged how she wants Charlie to be a part of their daughter’s lives. She also mentioned trying too hard to not let their girls know about Charlie’s history with drugs, women, and party. Richards maintains,

“I never talk badly about him and I want him to be part of their lives because I met a lot of the women that Charlie entertained and a lot of them had father-daughter issues. And I do not want that to be our girls.”

The incident unfolded back in 2013. So what happened was Sam had been bullied in her school in Calabasas. After Charlie got the wind of it, he was enraged, as any father would be. He decided to take matters in his own hand but little did he know, his action would result in some serious consequences.

Sheen asked his fans to send dog poop to her high school. This caused a lot of stir which subsequently resulted in Sam and Lola being shunned by numerous elite private schools. Moreover, after the incident unfolded, Denise decided to move away from Sherman Oaks and started searching for a new residence in Pacific Palisades and Malibu.

After getting Sam and Lola out of Viewpoint, Richards contacted numerous private schools but to no avail. All of them rejected her kids despite having great grades. Many of the schools clearly stated the reason behind all this is Charlie’s out-of-control flak.

As soon as your kid turns 16, dating life isn’t far away. As Sam also turned 16, Denise must be worried as to what type of guys her daughter will date. And we get that, it’s natural.

But it looks like Denise is quite active when it comes to her daughter’s dating life. According to reports, she didn’t even let her daughter go out with someone until she turns 16. Denise’s father also implemented the same rule. She wasn’t allowed to have a boyfriend or girlfriend until the age of 16.

Denise also told in one of the episodes of RHOB that she has even installed security cameras to catch Sam if she tries to sneak out. She explained,

“Sami’s getting into high school and new school, new boys. That’s when kids usually start sneaking out. I started sneaking out when I was 15 years old, so I know my kid’s going to sneak out. So I’m putting cameras up so I can catch her. … We’ll be able to see people sneak out or sneak in.”

Take a look at the clip!

Richards also admitted Sami was quite mad because of her mom’s habit. On the other hand, Sam’s father, Charlie isn’t quite strict. When she asked him if she should go to the homecoming dance with a guy, Charlie responded, “I’ll trust your judgment if you think he’s the right person to go with.”

Sam is still busy in her schools and stuff so she is yet to make a complete transition into the world of acting. Still, she has a few acting credits in her belt.

She has made an appearance in her dad’s hit show, Two and a Half Men, playing the role of Lisa’s daughter. Moreover, the teenager often makes appearances in her mom’s reality show, Real Housewives of Beverly Hills.

It is no wonder that Sam lives a pretty extravagant life. Both of her parents are multi-millionaire. Her mom has a net worth of $12 million whereas her dad Charlie’s total fortune is worth $10 million.

After their divorce, Charlie owes half a million dollars in child support to his daughters.