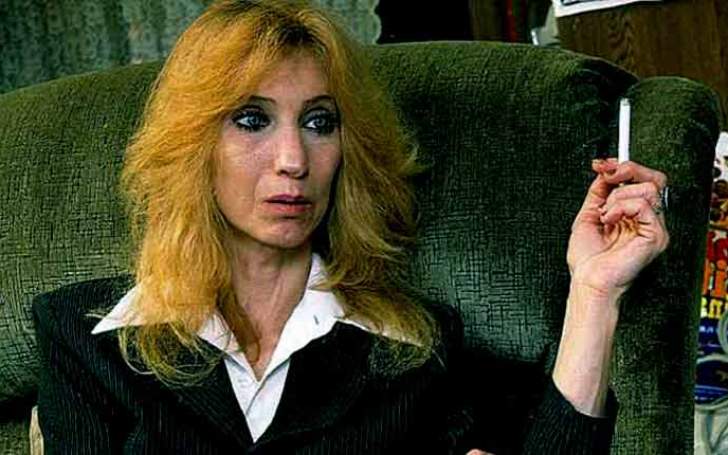 If you’re a rap music fan, then surely the name Deborah aka Debbie Nelson-Mathers rings a bell. Yes, you guessed it, she is the mother of the award-winning rapper, Eminem.

Today we’re going to talk about Deborah Mather and find all the intimate details of her personal life. Take a look at her family life, siblings, husbands, kids, and net worth.

Debbie Nelson-Mathers is an American national who was born in 1955 in a military base in Kansas. As of 2022, she is 67 years old. She is the daughter of Betty Hixson and Robert Ray Nelson. Her dad was in the United States Military. Before his retirement, the family lived a nomadic lifestyle and traveled to California, Italy, and Germany.

She belongs to Cherokee Indian and Scottish races. She has an American nationality and belongs to a Caucasian ethnic group.

Her early childhood was pretty depressing. She was only seven when her parents decided to split. At the time, her dad outright denied that one of her siblings, Todd was his son. This led Deborah and Steven to live with her father and Todd with their mother.

Later, her father got back together with his family. It was around this time when her mom started an extra-marital affair with Ron Gilpin. Her dad eventually found out after her step-sister Tanya was born in 1964.

Betty later married Ron but sadly, her stepfather was quite abusive. They used to split a lot of time and it continued for a long time.

Debbie Nelson-Mathers lost two of her brothers to Suicide

When Eminem’s father, Marshall Bruce Mathers II walked out on them, his uncle Todd Nelson stepped up and took care of him. We can say, Todd was the closest thing Eminem got as a father.

Sadly, at the age of 42, he reportedly committed suicide. The reason behind the suicide was allegedly a rottweiler. What happened was that the dog scratched Todd’s girlfriend’s car and scared her son. Due to this incident, Todd decided to kill the dog by running him over.

As a result, he was arrested by the police and his family couldn’t afford the attorney fees. Fearing he’d end up in jail, he shot himself in his Michigan residence backyard. His son, Todd Jr. found his body first.

Before killing himself, Todd had once been in jail for eight years. He killed his brother-in-law after a dispute. According to Deborah, it was an act of self-defense by Todd.

Likewise, another one of Eminem’s close uncles, Ronnie Polkinghorn died after shooting himself in 1991. Reports at the time suggested a fallout with his girlfriend made Ronnie take such a drastic decision.

Ronnie and Eminem were really close. They were not like uncles or nephews but brothers and friends. He was only 2-months older than the rapper. After Ronnie’s passing, Eminem etched “R.I.P Ronnie” tattoo on his upper left shoulder.

Besides, his aunt, Betti works as a housekeeper at Eminem’s mansion in Clinton Township, Michigan. She lives there with her hubby and kids.

Deborah Has been Married Four Times

Eminem’s mom had a very troubled childhood which shaped the majority of her life. Similar to her mom, who used to attract only drunk abusive guys, Deborah also has had numerous run-ins with drunkards.

She married her first husband, Marshal Bruce Mathers II on September 20, 1970. Deborah was only 15 at the time of their marriage. She took her mother’s consent and got hitched. At her first wedding, she wore a cream color dress with a red velvet vest.

She got pregnant with her first kid, Marshal Bruce Mathers III aka Eminem in January 1972, 16 months after her marriage. Unfortunately, when Eminem was a little kid, his parents divorced. Their divorce was finalized in 1975.

Deborah then tied the knot with a guy named Curt Werner. After dating him for a mere three months, her mom Betty urged her to marry the guy. In her book, My Son Marshall My Son Eminem, Deborah maintains that the wedding with Curt was a big mistake. Their marriage was annulled some times later.

She exchanged vows with her third husband B. J. when Eminem was 15. Her third spouse was a landscape gardener. He was previously married and had kids of his own. Their marriage ended after only three months.

Deborah married for the fourth time to John Briggs. Following their marriage, Briggs asked her to change her surname from Mathers to Briggs. She was hesitant at first but later decided to go for Mrs. Mathers-Briggs. Later on, after divorce from John, she reverted back to using her maiden name Nelson. Some tabloids also claim she was married to a guy named Berger Olsen Au Gres. However, her book never mentioned his name.

It is safe to say, the name we listed above was her husband and not anybody else.  For a more detailed analysis of her past wedding and relationships, we suggest you buy her book here.

Deborah started dating Charlie after separating from Bruce Mathers. According to her, he was the first serious relationship since Bruce. Their lovey-dovey ended due to insecurities between them.

After her fall out with Charlie, she went out with Don, a taxi driver. Many tabloids state Don’s full name as Don DeMarc, but it cannot be verified by any source. They lived together for over a year before calling it quits.

Subsequently, she started an affair with a man named Fred Samra (Samara) Jr. He was the son of Fred Samra Sr. owner of a local Meat shop. Fred Jr. was already a divorced man and likewise Deborah.

Fred was good. She liked him and Eminem used to call him ‘dad.’ Then in the summer of 1985, Deborah became pregnant with Fred’s child, Nathan Kane Samra (Samara) now Mathers. She gave birth to him on February 3rd, 1986.

They separated due to Fred’s abusive nature.

From her eldest son Eminem’s side, she has three granddaughters. Hailie Jade Mathers, 24, Alaina, and Whitney Scott Mathers. While Alaina is the daughter of Dawn, Eminem’s ex-sister-in-law, Whitney is the daughter of his ex-wife, Kim Scott from her previous relationship.

Did You Know: Deborah’s granddaughter Alaina’s mother was found dead in a car

On the other hand, her youngest son, Nathan Kane also has three kids. Two boys, Liam and Carter, and one daughter, Audrianna Melkonian. It is to be noted that Audrianna is reportedly his wife’s daughter from her previous relationship. He has been married to his wife, Ashley Mathers since May 2018.

Deborah Relationship with son Eminem: Once filed a $10 million defamation case against him

In 1999 Deborah sued her own son for slandering her name on The Slim Shady LP. According to the docs filed at Macomb County Circuit Court, Eminem repeatedly attacked her emotionally.

The docs continued that she suffered from emotional stress, loss of self-esteem, humiliation, and anxiety. After a few hearings, Deborah decided to call off the lawsuit, whereas her lawyer Gibson insisted on taking it further.

From her early childhood, Deborah had a scrawny body structure. Despite eating a lot, she never gained weight. Back when she was expecting Eminem, the doctor told her to gain some weight so as to deliver the baby as smoothly as possible.

Then in 2004, her life took a drastic turn. She discovered a walnut-sized lump in her breast. After the mammogram, Doctor’s suspected it was cancerous. During the time, Deborah had a terrible financial condition. She couldn’t even afford medical insurance.

Thankfully, sometime later she found out the doctor had misdiagnosed and she wasn’t suffering from a heart attack.

In 2008, with the help of British author Annette Witheridge, she authored an autobiography titled, ‘My Son Marshall, My Son Eminem Setting The Record Straight On My Life as Eminem’s Mother.’

The book depicted all the intricate details of Eminem’s life, way before he was a rapper. In addition, Deborah also maintains in the book that all the stories told by Eminem regarding his early life are not completely true.

Since the book’s release, it has sold thousands of copies. We especially recommend you buy the book to know all about the rapper and his relationship with his mom and her numerous boyfriends.

As of now, her net worth stands at $400,000. Despite facing a lot of challenges financially earlier on, Deborah accumulated a decent amount of wealth after selling her autobiography.

On the other hand, her eldest Eminem has a net worth of $230 million.

What is Deborah R. Nelson-Mathers doing in 2022?

Deborah hasn’t looked back on her terrible life. She moved forward and started a taxi service based in St. Joseph. Moreover, she and her son Eminem has also forgone the past. The estranged mother and son finally made amends after Eminem apologized.

On the occasion of Mother’s Day, he released a song Headlight wherein he offered his mom a sincere apology. One of the verses in the song goes, “But I’m sorry mama for ‘Cleanin’ Out My Closet,’ at the time I was angry.”