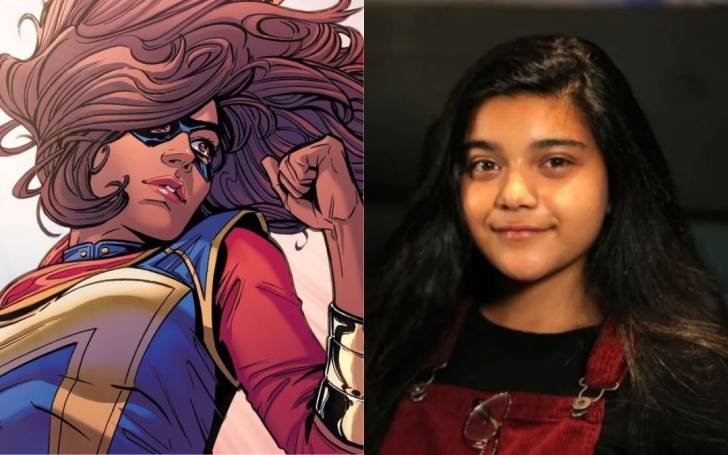 Iman Vellani is a Canadian actress who came on the radar after she became part of the Marvel verse. According to the Marvel boss, Kevin Feige, she will reprise the role of Ms. Marvel aka Kamala Khan. This will be the first major project for the actress.

The budding star comes from a working-class immigrant family. When news of her casting as Ms. Marvel came, people from all around the globe rejoiced, especially Muslim immigrants.

Today we’re going to take a close look at her early life and find out how her acting career came to be. In the meantime, also know about her ethnicity, parents, and more!

Iman Vellani Comes From a Family of Immigrant Parents

Born in late 2001, in Markham, Ontario, Iman had a modest upbringing. Brought in a Muslim household, both of Iman’s parents hail from Pakistan, a beautiful country situated in South Asia. Iman is a Canadian national and belongs to Indo-Aryan ancestry and Pakistani ethnicity. As of 2022, she is 19-years-old. She stands at a height of 5ft 6in (1.68m).

Other than this there is not much information about the young actress. She has practically lived the major portion of her life up until now behind closed doors because of which there’s no info on her parents and siblings as well.

Many of you might be thinking if Iman is related to another Canadian actress Aliza Vellani. Well, she is not. Besides, Aliza is famous for her role in Operation Christmas Drop, Little Mosque on the Praire, and Blurt.

Iman spent her early childhood in the Markham district of Ontario. Likewise, she studied at the Unionville High School in Markham. She graduated from college in 2019. When Marvel confirmed her as the lead in their upcoming Disney+ series, Ms. Marvel, her high school congratulated her.

Congrats to Unionville High School alumni, Iman Vellani!! We are celebrating with you!! https://t.co/ROc5DF7ygl

Judging by the Tweet, we can say Iman was the star of her teacher’s eye. As of yet, Iman has not enrolled in any colleges after graduating high school. She had once talked about her interest in cinematography so she might pursue that direction soon. However, given her tight shooting schedule for the upcoming several months, she won’t be joining a regular college anytime soon.

In September of 2020, Marvel studio announced they had found their Ms. Marvel in the Canadian-born actress, Iman Vellani. Ms. Marvel is a Pakistani-American teenager based in New Jersey. The series will, for the first time, showcase Marvel’s first on-screen Muslim superhero.

Marvel had planned on staying true to the character and prioritized those who would most definitely fit in the character, even if the name is relatively unknown. And as Vellani herself comes from the same ethnic background, her selection was a no-brainer.

I just saw they cast Ms. Marvel and legit got teary eyed.

Congratulations Iman Vellani! Your work is going to mean so much to so many people, myself included. I can’t wait.

In addition to the series, Marvel’s boss Kevin Fiege also mentioned that Ms. Marvel will also appear in future Marvel films as well. The series will mark Iman’s debut in the entertainment industry and what a way to debut.

Besides, Iman is also one of many new stars that Marvel has planned on introducing in the new phase, one of them being, Alaqua Cox.