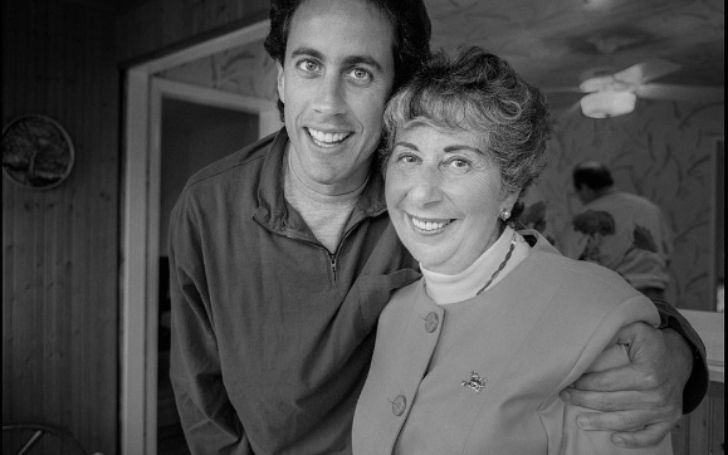 Betty Seinfeld is recognized as the late mother of Jerry Seinfeld, an American stand-up comedian, actor, writer, and producer. Her son is popularly known for playing a semi-fictionalized version of himself in the NBC’s show Seinfeld which was aired from 1989 to 1998. Further, Jerry was a co-writer and co-creator of his famous show Seinfeld along with the comedian Larry David.

Betty’s son Jerry has received huge appreciation from a wide range of audiences throughout the world for his hilarious comedy show and his character. So, it is obvious that people who praised her son’s work do want to know about the lady who gave birth to him. So, prioritizing the curiosity of the audience, today, we have come up with some interesting details on Jerry Seinfeld’s late mother.

Here, in the below piece of article, you got to know Betty Seinfeld’s life, including detail on her late husband, when and how she died, and her child apart from Jerry.

Betty was born Betty Hosni to her parents on December 12, 1917. Her father Selim Hosni was a joiner and he mother Salha Hosni was a homemaker.

Before her birth, Seinfeld’s parents already had migrated to the United States. Around 1909/10, both her mom and dad passed through Ellis Island on board the S.S. Florida and S.S. Hudson respectively. So, counting on this, Betty was born in the United States however, several online portals claimed that her birthplace was Aleppo, Mount Simeon County, Aleppo Governorate, Syria.

Seinfeld Grew Up In An Orphanage; Her Siblings

Though she had parents, Betty had her upbringing in an orphanage and foster care. In what conditions she became a foster child is not known but once her famous son Jerry in an interview said that his parents are orphans. Further, in one interview, he stated that his parents were loners.

Growing up as an orphan means Betty obviously grew up without her parents. However, she did have her sibling alongside her. She had an older sister named Orizia with whom she grew up together. Further, she reportedly had another sister named Nasar “Jimmy” Hosni and half-sisters Grace Hosni and Sarah Anastasio.

Betty’s Ancestry; What Was Her Ethnicity?

Her father Selmin Hosni was the son of Ezra Husney and Esther Sartell. He was an immigrant from Aleppo, Syria. Likewise, Betty’s mother Salha was a daughter of Sma Kassin and Garez Dayan. She was also originally from Syria and migrated to the United States along with her husband Selmin.

Since both her parents were Syrian and Jewish, so, it’s obvious that Betty Seinfeld was of Syrian Jewish descent.

Was Jerry Seinfeld’s Mom, Betty Seinfeld An Actress? Did she appear in Seinfeld?

In case, if you are thinking that Betty was an actress, let us tell you that, Betty was not an actress. Her character in her son’s show Seinfeld was played by the actress Liz Sheridan who recently died at the age of 93.

Now, talking about Betty’s profession, it looks like she assisted her husband in his profession of sign-making. The husband-wife together used to run their sign-making shop Signfeld Sign in New York. More than this, nothing about her professional life is known in the media.

Betty Seinfeld was Wife To Her Husband Kalman Seinfeld

Betty was married to the New York native Kalman Seinfeld. The couple tied the knot in 1950 in Brooklyn, Kings County, New York. Her husband was a sign maker by profession and he also served in World War II.

Since both Betty and her husband Kalman grew up as orphans when they met, they started a beautiful family. The couple had great respect for one another. Betty together with her husband shared a married life for almost thirty-five years. The two separated following the death of her spouse Kalman in 1985.

Her Husband Was A Funny Man

Years after her husband’s death, Betty once stated that her husband Kalman was humorous. While giving an interview with The Palm Beach Post, she told,

Jerry got his humor from his dad. “My husband was the funny one.”

Not only her spouse was funny but also he had a huge file of jokes that he collected while serving in World War II.

Betty Seinfeld Was A Mother Of Two

From her marriage with her beloved husband, she gave birth to two kids, a daughter named Carolyn Liebling and a son Jerry Seinfield.

Her first child Carolyn was born on October 12, 1952, in Brooklyn, Kings County, New York. Currently, she is 70 years old. She is the wife of her husband Lawrence Timothy Liebling and the mother of Joshua Keith Liebling.

Similarly, Betty’s son Jerry was born on April 29, 1954, which makes him 68 years of age as of 2023. Jerry married his wife Jessica Sklar Seinfeld in 1999 and became a father of three children. At present, Jerry is one of the established stand-up comedians, actors, and producers in the American Entertainment Industry.

Betty Died Becoming A Grandmother; Details On Her Grandchildren

In total, she was the grandmother of her four grandchildren, Joshua Keith Liebling, Sascha Seinfeld, Julian Kal Seinfeld, and Shepherd Kellen Seinfeld.

Betty Seinfeld Died At The Age Of 98; What Was The Cause Of Her Death?

On April 18, 2014, Betty took her last breath. There was no specific reason behind her death instead she died peacefully and naturally at the age of 98 in Palm Beach County, Florida, United States. After her death, her body was cremated.

As of 2023, her son Jerry Seinfeld has an estimated net worth of $950 million. No doubt that he amassed such a huge amount from his career as an entertainer in the American Entertainment Industry.

Lindberg Mescudi: Everything To Know About Kid Cudi’s Late Father