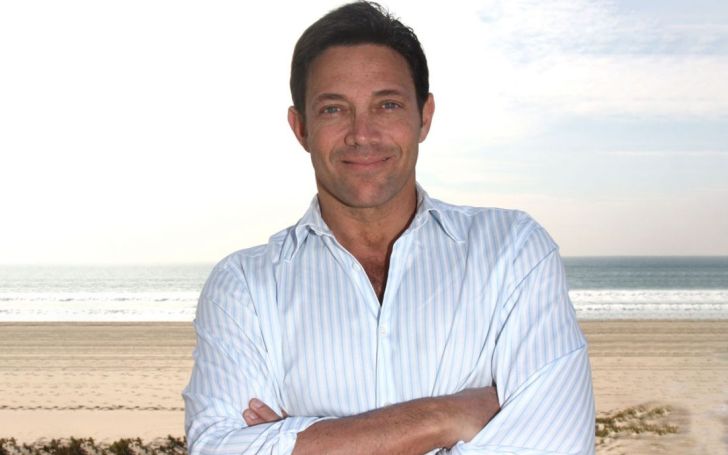 Before the movie ‘Wolf of the Wall Street‘ came out, not many of us knew about Jordan Belfort. The man behind the million-dollar defrauding scandal back in the 1990s quickly became famous for his outlandish lifestyle surrounded by women and whatnot. The man even cheated on his wives multiple times as depicted in the Oscar-nominated movie.

Jordan lived a life many people dreams of but the end result was quite drastic. His wives left him and he was subsequently arrested. But now he is a changed man! He has started a new life, with both a new career and a new spouse.

Today let’s find out all the intricate details of his personal life and find out about his current wife, divorces, and children.

Who is Jordan Belfort’ wife? Is he married to his new partner Anne Koppe?

It is hard to believe that a hedonist man such as Jordan would finally settle down. Well, to our surprise, he has. He is currently in a relationship that might just go all the way to the end.

The now-defunct Stratton Oakmont founder is currently in a happy relationship with Anne Koppe. Some tabloids suggest the duo has been married whereas some suggest they are only engaged.

Adding more fuel to the marriage fire, Jordan and Anne both have shared anniversary posts several times. Now generally, the term anniversary is used when there’s marriage in the picture, so it is highly possible they are really married. Furthermore, Jordan also shared a throwback picture of the two on an altar.

Judging by the anniversary post, we can say they tied the knot on May 28th, 2008. What’s more, in one of the posts, Jordan even mentioned Anne as his wife. Take a look!

All these point out to only one direction and that is, Jordan and Anne are indeed married. However, we cannot say it for sure because, for all we know, the anniversary Jordan is talking about might be the day he started going out with Anne.

Jordan is a father of one child: Adopted Anne’s son from her Past Relationship

Apart from being a great boyfriend to Anne, Jordan is also enjoying fatherhood. He is the step-father to Anne’s son, Bowen Boullianne, from her past affair.

Both Jordan and Bowen share a great relationship. In fact, Bowen even touts his step-father as his inspiration. He wishes to be an ethical entrepreneur, which is quite ironic considering his stepdad’s deeds in the past.

In an interview with DailyMail Australia, while talking about getting a degree in business and following his step-dad, Bowen maintained,

“Growing up around my stepfather I saw what it was like to be an entrepreneur at the highest level. It totally resonated with me. So getting a degree in business was the first obvious step.”

My son has GRADUATED!!! Everyone go send him some love! I couldn’t be more proud as a father!! @bowen1

Well, Jordan seems to be enjoying his new life with his apparent ‘spouse’ and stepson. Nothing but great wishes for him and his family.

Jordan’s first marriage was with Denise Lombardo. Initially, he came across Denise during his early days as a meat seller. One day, when he driving his truck to deliver meat at a local barbershop, he locked eyes with his future wife.

Instantly, Jordan asked for her number but to his dismay, she resisted. Knowing Jordan, he kept on insisting and asked her more than a hundred times more for her number yet Denise stood unfazed. He never had a hard time selling anything to anyone but this was quite the turntable.

Soon, Jordan came up with a plan. He decided to persuade her by driving his Porshe right outside the saloon. Subsequently, Denise yielded.

The couple tied the knot in the 80s. At first, their marital life was going great. Jordan was making big bucks selling pink sheets. It was after he founded Stratton Oakmont the duo began to face troubles. Jordan cheated on Denise with Nadine Caridi, his second wife. As a result, by the 90s they were divorced. The former couple do not share any kids.

Talking about their divorce settlement, Jordan paid his first wife millions of dollars upfront. Furthermore, he even paid her $50,000 every month as spousal support for an undisclosed amount of time.

The reason behind the separation of Jordan and Denise is Jordan’s eccentric behavior. In his memoir, The Wolf of the Wall Street, Jordan claimed he cheated on his first wife Denise multiple times.

In addition, falling in love with his second wife, the Duchess of Bay Ridge, Nadine Caridi, is also one of the major reasons behind the separation. After coming across Nadine for the first time, Jordan started an extra-marital affair with the lady. According to his memoir, she was his mistress.

Later on, what started as an unethical affair blossomed into full-time love. After years of dating, the two tied the knot in 1991 in a beautiful wedding ceremony held in the Caribbean.

Even after welcoming two children, Jordan and Nadine’s marriage life was full of problems. All due to Jordan’s drug addiction and whatnot. Later, when the FBI arrested him, she filed for divorce, and consequently, their divorce finalized in 1998.

Despite having their fair share of differences, the former flames have called it even and are good friends. Moreover, they also shared the joint custody of their kids until they came off age.

The motivational speaker has had multiple affairs in the past. He was once in a relationship with his college mate during his college days. His current partner, Anne shared a throwback picture of Jordan and his girlfriend on her Facebook account. Sounds weird, right! But before jumping to any conclusion listen to this. She just wanted the world to see how cute her partner looked back in the day.

Apart from that, Jordan wrote in his memoir that after he got out of prison, he got engaged to someone. However, he soon called it off.

In addition, when Jordan and Nadine were separated (not divorced), he hooked up with a stripper and instantly decided to marry her. Her name was Jennie and Jordan even called his mom and told her that he is going to marry Jennie. Nonetheless, just a day after his announcement, he decided to get back with Nadine and left Jennie.