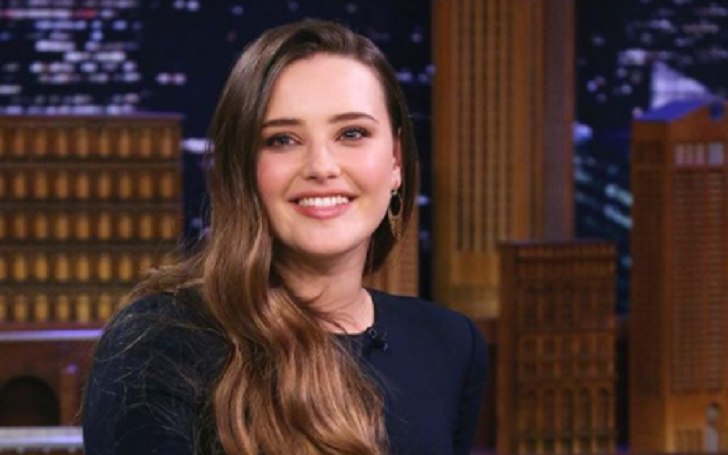 Katherine Langford played Hannah Baker in the smash-hit teen drama series 13 Reasons Why, probably the role that brought her international fame. Her charismatic performance in the project also earned her a Golden Globe Award nomination as well.

During her time on the show, several sources speculated that Langford is dating one of her co-stars. Was that true? If yes, who is Katherine Langford’ boyfriend?

To know the full love story of Langford, then read on!

Who is Katherine Langford Boyfriend? Her Relationship Status

The exact answer to the question is Langford doesn’t have a beau at present. She has kept things quiet, and rarely discusses her private life. As of 2022, it looks like Katherine is single and rather enjoying her singlehood.

However, while playing in 13 Reasons Why, Langford became the subject of curiosity after her insane chemistry with co-star Dylan Minnette.

Langford and Dylan never had a romantic relationship in real life. But due to their on-screen chemistry in the series 13 Reasons Why, tabloids began gossiping about their possible romance. Nonetheless, that never happened between the two behind the camera.

In the hit series, Dylan played the role of Clay Jensen, a teenage boy attending high school. Though the series depicts Clay having a crush on Hannah, they are just good professional colleagues outside the reel.

Katherine loved Dylan’s character and also admired his support on the show. She said,

He’s fantastic. Dylan Minnette is so generous and kind and courteous and he’s pretty much Clay. Clay is sweet and lovely and just ever-giving to Hannah. Every time I got on set — playing Hannah Baker — it’s kind of like going through six months of bullying. But every single scene I had with Dylan, it would put a smile on my face. He would always be there to kind of lighten the day.

Besides, Katherine’s rumored partner Minnette has been in a wonderful relationship with Lydia Night. His girlfriend is the lead vocalist and guitarist of The Regrettes, a punk rock band. The two began dating back in 2018 and are still together.

Prior to Lydia, Dylan also dated actress Kerris Dorsey. They first met while they both were playing in the family comedy film Alexander and the Terrible, Horrible, No Good, Very Bad Day (2014).

Langford has remained quite confidential when it comes to her love life. The 25-year old actress never came out with a possible boyfriend to date. Due to her tendency to keep things to herself, the information about her past romance still remains out of the media.

All about Katherine Langford’ Early Life, Parents, and more

The actress was born on April 29, 1996, and raised in Western Australia. Her father Stephen Langford is a flying doctor while her mother Elizabeth Langford is a pediatrician. Katherine also has a younger sister Josephine, an actress.

Her acting journey started just after her graduation in 2013. She initially honed her skills after attending the National Institute of Dramatic Arts Advanced Actors Residency.

Langford later started featuring in independent movies before making her professional debut with 13 Reasons Why in 2013.  The actress shared the screen along with Alisha Boe, Brandon Flynn, Justin Prentice, and Miles Heizer. She portrayed the main role in Cursed in 2020.

Besides, Katherine also has worked in a few movies such as Avengers: Endgame, Knives Out, and Spontaneous.