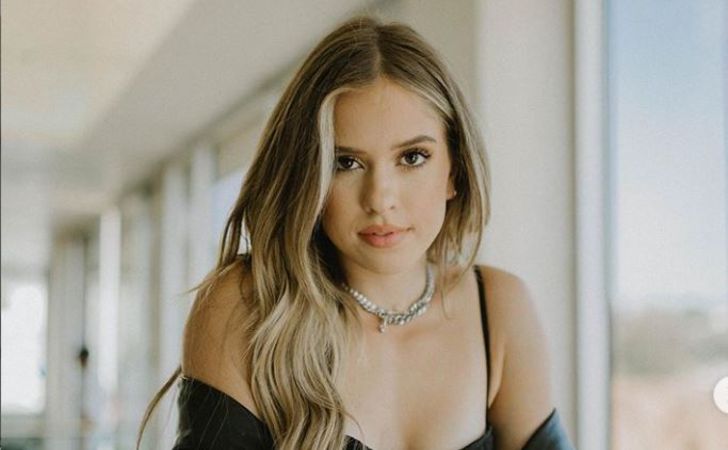 Kelianne first became famous after she directed-performed an acrobatic routine. In the video, she along with The Acrobats crew danced to Justin Beiber‘s song, ‘Sorry.’

Find out about this beautiful acrobat turned social media influencer. All the details of her family including her parents and siblings. Also, know how much is her net worth.

Who is Kelianne Stankus?

Raised in a catholic household, Kelianne is an American social media influencer. She initially got fame after directing and performing as a member of the gymnast group, The Acrobat.

After the group shared an acrobat-style dance number on the song, ‘Sorry,’ Stankus became an instant hit. The video has so far raked in more than 7 million views.

Soon the 26-year-old decided to share her breathtaking dance moves with the world. It was back in 2016 when she created her Musical.ly account, now known as TikTok.

Since then, Kelianne has come a long way. At the moment, she has more than 5 million followers on TikTok, above  700k followers on Instagram, and over 60k subscribers on YouTube. It is safe to say, she is a fully-fledged social media personality.

How old is Kelianne Stankus?

She is currently 26-years-old.

About Kelianne Stankus Family: Who are her parents?

Kelianne is the middle child of her mom Leann and dad Kelly. Her father Kelly is a service manager at Ontario Refrigeration Servies, Inc. He has been with the organization since 2001.

Kelianne shares a deep affection with her mum and dad. Her family currently resides in Riverside, California. However, she has moved out and now lives in Los Angeles.

During the holiday season or on special occasions like Father’s Day and Mother’s Day, Kelianne often visits her old folks.

She has one older brother, Cody Stankus, and a younger one, Lucas Stankus, 22.

Cody is a singer and he recently released his first album, Cosmic Fugazi. On the other hand, her younger brother is an Industrial-Productivity Engineer. Besides, he is also a big anime freak.

Her younger brother has once appeared in one of her YouTube videos titled, ‘Brother Does My Makeup.’

Before Kelianne became a social media influencer, she started out as a kid who liked gymnastics. Nicknamed ‘Sleepybear’ Kelianne began her career as a gymnast back in the early 2000s.

In 2005, for her performance, she even won a gold medal at the Freedom Cup 2005. Slowly, she made her way to the USA National Acrobatic Gymnastics Team. During her time there, she competed in two big events, first in San Jose in 2011, and second in Florida in 2012.

What is Kelianne Stankus Net Worth?

Kelianne’s net worth as of 2020 stands at $300,000. She earns the majority of her income from ad revenue and sponsorships.

In a video uploaded in October 2019, titled, ‘I got Surgery’ Kelianne opened up about her health issues. She revealed she was suffering from a swollen lymph node after she got sick about 6-months back.

Because of this, she even had to undergo a needle biopsy. Moreover, she also mentioned that she occasionally suffers from tonsillitis.

Kelianne Stankus Dating Life: Who is her Boyfriend?

Kelianne is in a delightful relationship with her model boyfriend, Chase Mattson. The duo confirmed their romance in June of 2020. While seemingly proving their love, she shared a photo where she wished her bf on his birthday. In the picture, the couple is sharing a kiss.

A few weeks later, she added yet another picture with her beau. This time, the photo was from their trip to Lake Arrowhead, California.

Kelianne is engaged to be married to her boyfriend

After dating for a year, her boyfriend Chase decided to take their relationship to the next level. He proposed to his girlfriend in an incredible way. At first, he took her on a helicopter ride around Hollywood Hills. The pair then landed at a restaurant where Chase popped the big question. In an interview with The Untitled Magazine, Kelianne revealed that she was genuinely surprised by his proposal.

Chase has even shared a video of their engagement on his YouTube channel. Take a look!

Nevertheless, her boyfriend was once in a committed relationship before. From his previous romantic endeavor, he shares two daughters, Hazel and Nora.

Speaking of past affairs, Kelianna too was involved in a romantic affair before. She dated model and social media personality, Zach Cox. They dated for around a year before calling it quits in late 2019.

Apart from Zach, her fans constantly ship her with fellow TikToker, Tayler Holder.