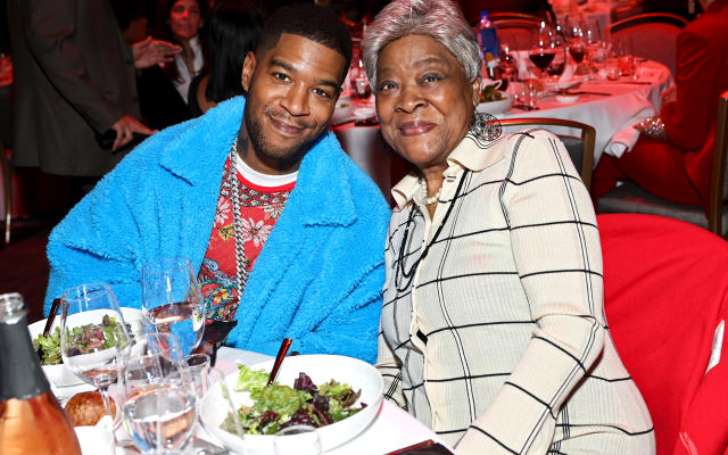 Elsie Mescudi is the mother of an American rapper, singer, songwriter, and record producer Kid Cudi (aka Scott Ramon Seguro Mescudi). Her son rose to prominence with the release of his first single “Day ‘n’ Nite” which later became a worldwide hit.

Besides her identity as a celebrity mother, Elsie is a music teacher on her own. A Tennesse native all her life, she worked as a choir teacher in a middle school in Cleveland. She got married to the Cleveland native Lindberg Styles Mescudi and the couple lived together until Lindberg’s death in 1995. Well, after her husband’s demise, did she marry again?

Further, who are her children besides Kid Cudi? Here’s everything to know about Kid Cudi’s mother Elsie Mescudi. Have a closer look.

Who Is Elsie Mescudi? Her Age And Early Life

As aforementioned, Elsie is the loving mother of the rapper Kid Cudi. She is just in the limelight due to the popularity of her son. So, not much detail about her early life is known in the media.

But since her famous son time and again wishes her birthday on his social media account, her age is no longer hidden from the world. The celebrity mother is 74 years of age as of 2023. She was born Elsie Harriet on January 19, 1948, in Tennessee, the United States of America.

Besides, Kid’s mom belongs to the African-American ethnicity and holds American nationality.

Elsie Mescudi Was A Choir Teacher; She Taught Music To Her Son As Well

Talking about her profession, Elsie Mescudi was a choir teacher at Roxboro Middle School in Cleveland Heights, Ohio. Actually, Elsie was trained in classical music which she later used as an income source. She taught thousands of students in her teaching career among which her now musician son was also one. Regarding this, her son Kid once stated in an interview that he was failing in the class so, his class teacher suggested he join his mother’s choir class which he accepted.

On his mother becoming his teacher, Kid stated

All year long, I’m just like in the back of the class, trying not to get called on. And my mom was always trying to give me solos and sh*t.

As a teacher, Mescudi was so real that she always wanted her students to focus more on skills rather than marks. In this respect, her son told,

From her son’s statement, we can say that Elsie Mescudi was really an honest teacher. As of now, she is retired from her profession.

Elsie Mescudi Was Married To Her Husband Lindberg Styles Mescudi

Elsie Mescudi and her now-late husband Lindberg Styles Mescudi tied the knot in 1979. At the time of their marriage, the couple had an age difference of 21 years. Despite such a huge age gap, they led a beautiful married life together.

As a married couple, they welcomed four children. Elsie and her spouse were together as husband and wife for 16 years and only separated after Kid Cudi’s father Lindberg passed away in the year 1995. After the death of her better half, it looks like Mescudi has not started any new relationship.

Elsie’s Husband Died Of Cancer; Short Details On Him

It was on July 31, 1995, at the age of 68, Elsie’s husband Lindberg died of cancer. He was a house painter and substitute teacher by profession. Looking back and talking about his early life details, he was born on June 21, 1927, in Cleveland, Cuyahoga, Ohio, US.

His parents were Charles Manitow Mescudi and Essie Viola Lawson. Lindberg grew up together with his five siblings Charles, Udeal, Coid, Marvin, and Essie Ella. He got married to his wife Elsie at the age of 51.

Elsie Mescudi Is A Mother Of Four Children

With her late husband, she shares four children altogether. Elsie is the mother of three sons named Domingo Mescudi, Dean Mescudi, and Kid Cudi. Further, she has also a daughter Maisha Mescudi.

Her daughter Maisha is the oldest one among her four children. Maisha was born in the year 1976 and she is currently 46 years old. Her second child Dean came into this world in 1980 which made him 42 years of age as of 2023. In the following year, Elsie gave birth to her third child, a son Domingo who is 41 today.

Her youngest son Scott Ramon Seguro Mescudi, popularly known by the name Kid Cudi was born on January 30, 1984. As of 2023, he is 38 years of age. He is one of the most known celebrities in the American Entertainment Industry.

Today, Mescudi’s son Cudi is a well-known American rapper and actor. He began his career as a rapper in 2008 by releasing his first single Day ‘n’ Nite. Following his debut single, he then came up with his mixtape Á Kid named Cudi and with the mixtape, he became able to catch the attention of high-profile musicians like Kanye West.

His mainstream musical journey started when Kanye signed him to his Good Music label imprint. Further, from his co-ordination with Kanye, he gave several hits singles and albums like Man on the Moon: The End of Day, Make Her Say, Pursuit of Happiness, Kids See Ghost, and several others that helped him to gain worldwide popularity.

Her Son Is Actor As Well; His TV And Movies

Not only as a rapper and a singer that Kid evolved in the industry, but he ventured into acting as well. As an actor, he has acted in some TV series and movies like The Cleveland Show, Brooklyn Nine-Nine, Scorpion, Maniac, Need for Speed, and Meadowland.

In 2022, he created an adult animated music TV special Entergalactic which premiered in August 2022 on Netflix music. As of now, it has received critical acclaim and has already won two awards Hollywood Music in Media Awards and Critics choice Celebration of Black Cinema and Television.

The mother-son shares a really close bonding with each other. Most of the time, Elsie makes a media appearance alongside her famous child. In fact, Kid in his late 30s also seems absolutely a mamma’s boy.

On December 6, 2022, he showed up at the critic choice association together with his mom which he shared on his Facebook and wrote,

To be in that room with so many awesomely talented brothers and sisters, LEGENDS, I couldnt believe I was there. It was the most unreal experience.

In the caption, he gives an extra shoutout to his beloved mother. Look at his words;

I had all my favorite people with me. Special shout out to my Mommy for flyin in from Cleveland just to be there with me. I LOVE U MOM!!

Elsie Is A Grandmother

The 74 years old Tennesse native is a grandmother. She has a beautiful granddaughter named Vada Wamwene Mescudi, the daughter of her son Kid Cudi. She was born on March 26, 2010, in Calabasas, California. As of 2023, Vada is 12 years of age.

Further, she also has a grandchild named Jabari.

How Much Is Kid Cudi’s Mom, Elsie Worth?

All her life, Elsie worked as a choir teacher at school. Through her profession as a teacher, she must have earned a decent amount however, it looks like her worth is not evaluated yet. Meanwhile, her popular son Kid Cudi has an estimated net worth of $18 million as of 2023.

Who Is Cameron Diaz’s Mother Billie Early? Her Married Life, Career, Net Worth

Franklin Thomas Fox, Megan Fox Father: Who is his wife?