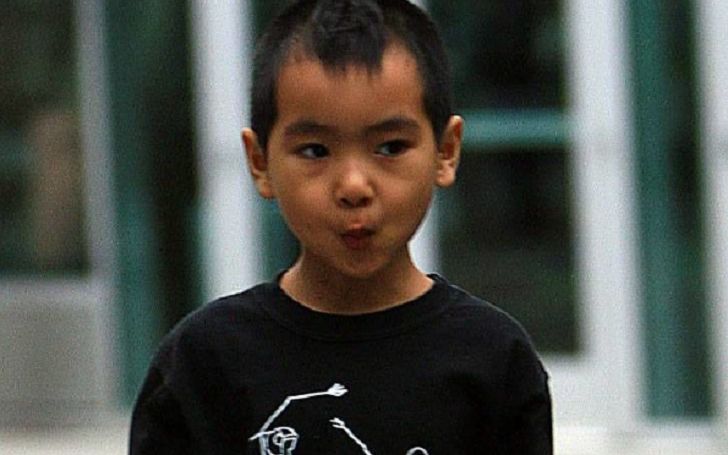 Maddox Jolie Pitt is the eldest adopted child of Hollywood elites Angelina Jolie and her ex-husband Brad Pitt. Apart from that, the star kid once did a cameo role in his father’s Zombie apocalypse movie World War Z.

Though Angelina had adopted three kids, Maddox was the first to capture her heart. Nonetheless, adopting Maddox wasn’t an easy process for the Wanted star. Were there any legal issues while adopting him?

Here is everything about Angelina Jolie’s son Maddox!

He was born as Rath Vibol on 5th Aug 2001 in Cambodia. Unfortunately, soon after his birth, Maddox was abandoned at a local orphanage by his biological parents.

Later on, the baby was discovered by a humanitarian actress in one of her United Nations mission. The boy was just seven months old when he was adopted by Jolie in 2002.

Unlike his adoptive parents, the details of his biological parents still remain behind closed doors. Besides, Madd has dual citizenship in the United States and Cambodia like his mom at present. As for his ethnicity, he belongs to a mixed ethnical background.

All About Maddox’s Adoption

As per the sources, the Tomb Rader actress fell in love with Cambodia while filming the movie. Since she adored it, she then decided to adopt an orphaned kid among the hundreds in the country. But what was so special about Maddox?

Angelina revealed in one of her interviews that she chose Maddox because he struck her heart in the orphanage when he smiled right at her, permanently cementing the foundation of their strong bond. However, it was a complicated process.

As a non-native back then, Angelina found it too complex to adopt a child as there were many formalities and legalities she had to go through. Nevertheless, as her intention was pure she got help from Sarath Mounh, who was a Cambodian citizen.

In order to cut through some legal requirements and obstacles that come with adopting a child in a foreign land, Sarath offered to legally adopt Maddox as his father. Later, he signed over the full custody of Maddox to the actress.

Was Maddox Stolen At Birth? His Adoption Under Scrutiny

However, netizens were skeptical of whether Angelina’s adoption of Maddox was even legal or not. What triggered this issue? It was when Elizabeth Jacobs’ documentary “The Stolen Children” gained popularity online, that the authenticity of Maddox’s adoption was questioned even more.

The documentary shed some light on the off-scene works of Lauryn Galino, the same agent that Angelina Jolie used to adopt her son Maddox and exposed his corruption. As per the sources, Lauryn was pleaded guilty to money laundering and forgery to obtain (U.S.) visas for the orphan kids and subject to imprisonment for 18 months.

Similarly, Maddox was formally adopted by Brad in 2006.

Brangelina was one of Hollywood’s most shipped couples. Mr. and Mrs. Smith’s co-stars dated for a decade before they tied the knots in August 2014. By The Sea was the duo’s first collab movie after their wedding.

However, their relationship post-marriage was short-lived. It took a turn when Brad wasn’t able to control his drinking habits and it all ended on the flight from France to LA in September 2016. The couple was heading back home with their children when the pair got into an argument. When it got ugly and out of hand, their son Maddox tried to intervene but Brad lunged at him instead.

As per the sources, witnesses stated Brad was in a drunken frenzy on the plane and “became physical” with his eldest son Maddox back then. Since that incident, the father and son’s relationship has been strained and was the reason behind Angie and Brad’s divorce as well.

Has Maddox and Brad Reconciled?

In an interview back in 2019, Brad admitted that he regards the quarrel with his son as a terrible loss. However, Madd wasn’t quite receptive to his father’s statement.

Apart from Madd, the Fight Club star doesn’t have a good rapport with his other son Pax as well. During one of the Christmas celebrations, both the brothers didn’t go to open the gifts at their dad’s place.

Who Won The Custody Battle Of Their Children?

The court had granted joint custody to both Brad and Angie in May 2021. However, The California Supreme Court had given the verdict over the custody battle of their five children in Jolie’s favor in October of the same year. But what about Madd’s response?

During, Brangelina’s divorce and custody dispute of their children, their eldest son had given testimony as he had already reached a legitimate age. However, his decision wasn’t that favorable towards his dad’s side.

Maddox wanted to even change his name to just Maddox Chivan Jolie excluding his dad’s last name from his surname after his parents split. However, his mom didn’t approve of it.

How’s Maddox’s Relationship With His Siblings?

It is apparent that he is closer to his mom and looks up to her. But how is his relationship with his siblings? Being the eldest child comes with lots of responsibility but Madd is a superb big brother.

He has a great bond with his two brothers and three sisters: Pax, Zahara, Shiloh, and the twins Vivienne and Knox. While the first two are adopted kids of their parents, the latter three are Brangelina’s biological children. The siblings spent their time together during the pandemic when Madd returned back home once Covid-19 hit the globe.

Likewise, Angie is a proud mom of the brood and has instilled good ethical values in her children. She is happy with how her sons treat their sisters and vice versa.

Does Maddox Jolie Pitt Have Tattoo?

Just like his mom, Maddox is also quite fond of tattoos. The 20-year-old young boy had showed off his body art in a candid snap in his rare appearance for the upcoming Vogue shoot with his mom, in Feb 2021.

He has two tattoos, where one is of a traditional Dragon across his right ribs and the other one is a smaller ink on the wrist of his left hand.

Currently, Angelina Jolie’s son studies Bio-Chemistry at Yonsei University in South Korea which is also close to his birthplace. He joined the college in August 2019.

What is Maddox Jolie Pitt Doing At Present?

Besides, with Hollywood A-listers as parents, it wouldn’t be surprising to have your hands in the entertainment industry. Though he had a short screen time, he debuted at the age of 11 in his dad’s movie World War Z. Likewise, he served as a production assistant in the film By the Sea, in which his mom performed and directed.

Similarly, in 2017, Maddox worked as an executive producer for First They Killed My Father. The screenplay is based on an autobiography by Cambodian author and human rights activist, Loung Ung. The film had garnered 9 awards and 28 nominations.

He has accumulated $1 million worth of fortune from his acting and producing career. Also, there is a foundation after his name in Cambodia. The foundation emphasizes on preserving Cambodia’s cultural heritage, encouraging woman empowerment, and helping underprivileged people.

Besides, his mom has amassed a net worth of $160 million and was the second-highest-paid actress in 2020. Likewise, his dad has a jaw-dropping net worth of $300 million.