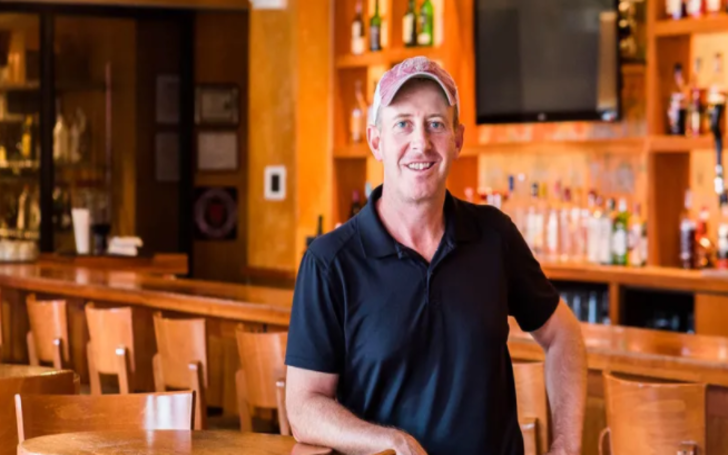 Geoff Tracy is a chef and businessman from New York City known to mass as the husband of CBS journalist Norah O’Donnell. Though his wife is much more famous than he is, Tracy’s career as a restaurant entrepreneur is admirable in itself.

The husband and wife both are at the top of their respective careers. The couple owns more than six restaurants in the Washington, D.C. area alone including others in Virginia, Maryland, and a few more states.

So, how did the couple do it? How are they handling their busy work schedule and family life? Also, how did the love blossom in the first place? Know all these, but taking Norah’s husband as a standpoint; getting to know all about his early struggles all the way up to his blissful married life and professional career.

Tracy was born on 23 January 1974, in New York City, New York. Much like his wife, he also has Irish ancestry.

He studied at Hall High School and also went to Choate Rosemary Hall. The resident of Washington D.C. is a native of Boston, Massachusetts, reads his Facebook. The now 48-year-old also claims he grew up partly in Hartford, Connecticut.

In an interview with Courant in September 2010, Tracy remembered the time when he used to live in both Hartford and West Hartford and in Wallingford.

Talking about his education, Geoff Tracy went to Norfeldt for elementary school, King Philip for middle school, Hall for ninth grade, and then to Choate.

The chef also mentioned the period when he was 13 and used to visit a farmers market somewhere on Albany Avenue. He said he loved to cook from the beginning. Tracy revealed one of his first jobs was a busboy at the old Max on Main.

The future husband of Norah O’Donnell graduated from Georgetown University in 1995 with a degree in theology. He wrote his thesis on the religious dialogue between Christians and Muslims.

Following that, he went on to graduate first in his class at the Culinary Institute of America in Hyde Park, NY.

Geoff Tracy Is A Succesful Restauranter

After graduating in 2000, Geoff opened his own restaurant called Chef Geoff’s in Washington D.C. Upon receiving success from his venture, he opened a second version of Chef Geoff’s in the D.C. downtown area in 2002. At the time he was still in his 20s.

Tracy oversees the menu, marketing, finances, and concept of the restaurants. Norah’s partner is also the co-author of the book Baby Love – Healthy, Easy, Delicious Meals for Your Baby and Toddler. The other writer of the book is none other than Tracy’s wife, Norah O’Donnell, herself.

This New York Times Best Seller teaches busy parents how to feed “Healthy, Easy, Delicious Meals for Your Baby and Toddler”. St. Martin’s Press is the one that published the book.

The chef serves as an executive on the board of the Restaurant Association of Metropolitan Washington. Additionally, he contributes to more than 150 charities and organizations every year in the form of silent auctions, fundraising appearances, and even the Chef Geoff-sponsored Little League team.

In 2006, the National Restaurant Association awarded Geoff with The Best Neighbor Award for its contributions to the community. In 2009 he received Albert Uster’s “Chef of the Year Award”. Tracy is also a member of the Washington Baltimore chapter of the Young Presidents Organization.

In 2010, Washington Business Journal named him one of the top 40 business people under the age of 40.  The following year, Chef Geoff’s Tysons won the RAMMY award for “Hottest Restaurant Bar Scene”.

In 2019, Georgetown Pediatrics Gala honored Geoff with the Flame of Hope award for his work in promoting healthy eating in children.

The LIA’s owner is also known for high-profile political campaigns. In 2006 Tracy led a campaign to repeal the DC Candle Tax.  Six years later, in 2012 he initiated a highly popular movement against speed cameras.

In 2018, O’Donnell’s husband Geoff Tracy sued the Commonwealth of Virginia over the constitutionality of regulations that constricted his free speech in paid advertising.  In consequence, the suit led to legislation abolishing those regulations starting in 2019.

The father of three is an avid golfer and a mediocre racquet sport enthusiast.  Tracy is a big proponent of his favorite food bacon.

Geoff married his wife O’Donnell on June 8, 2001. They met at Georgetown University. In the Washington Post, he mentioned he first saw Norah along with her roommate in a cafeteria line in college during his freshman year.

In an interview, Tracy’s wife O’Donnell revealed she and Tracy painted the walls of the latter’s first restaurant together, as they could not afford painters or contractors.

In a 2019 interview with CBS’s Watch! Magazine, O’Donnell described her man as an incredibly supportive and organized man, adding that he handles the most logistics at home.

When asked how they manage a work/life balance when each of them — lives in a different city most of the time, O’Donnell answered by saying that they do it through meticulous scheduling.

The couple maintains seven Google Calendars—there’s one for each, the kids, and even their nanny. Tracy works two years out to schedule their vacations.

They Own A Million Dollar Property

Tracy along with his wife O’Donnell resides in the Upper West Side of New York City, with the latter splitting time between Washington D.C. and the city. In 2010, the reporter and the chef bought a $3.2 million home in D.C.’s Wesley Heights.

They were initially planning on redoing their kitchen in 2013, but O’Donnell got a job at CBS News and had to move to New York.

As the Washington Post notes, they split their time between a New York apartment and their D.C. home. The home consists of seven bedrooms and four levels.

Tracy’s wife of 20 years, Norah O’Donnell, currently anchors the CBS Evening News. In addition, she is a correspondent for 60 Minutes and CBS’ morning show — Face the Nation.

Her newscast garnered 7,437 million views in April of 2020, making her the most-watched woman in national TV news.

O’Donnell was formerly the co-anchor of CBS this morning and worked for NBC News for over a decade. Washingtonian Magazine named her among Washington’s 100 most powerful women.

She garnered two Emmys on separate occasions, one as part of NBC News’ Election Night coverage team in 2008. The other one was for her six-month investigation and report on Sexual Assault in the Air Force Academy for CBS This Morning.

He Is The Father of Three Children

Geoff has twins, Henry and Grace, 13, and another daughter, Riley Norah Tracy, 12 with his partner O’Donnell.

Mrs. Geoff shared with People how she was handling raising children while working from home due to the pandemic, saying 2020. She said she was on a call with someone from the White House and her daughter was shouting at her complaining about the printer.

Geoff’s wife added that most of the time she is on a conference call whilst cooking breakfast for the kids. She, though mentioned they have the ‘stop video’ feature on Zoom.

Geoff Tracy Filed a Lawsuit Against Virginia Law in 2018

In March 2018, Tracy filed a lawsuit against the Virginia Department of Alcoholic Beverage Control challenging the state’s right to bar him from fully promoting happy hour specials.

The existing law, prohibited restaurants and bars in Virginia from listing discounted prices in any marketing materials and can only use generic terms such as “happy hour” and “drink specials” when announcing offerings. For instance, including information about the length of happy hour is fine; mentioning “two-for-one” drink specials was not.

Tracy and his attorneys argued the rules were unfair. They emphasized the laws hindered his First Amendment rights and asked to put bureaucrats on notice that they can’t censor truthful, non-misleading information.

Virginia eventually eased the law. As per their new rule, bars and restaurants could use promotions like “Wine Down Wednesday” and advertise the prices of their drinks as long as it didn’t promote excessive or underage drinking. The rule came into effect on July 1, 2019.

What Is Norah O Donnell’s Husband Geoff Tracy’s Net Worth?

As of 2022, Tracy is estimated to have a net worth of $10 million. Most of his income comes from his restaurant business. On the other hand, O Donnell is worth around $18 million.