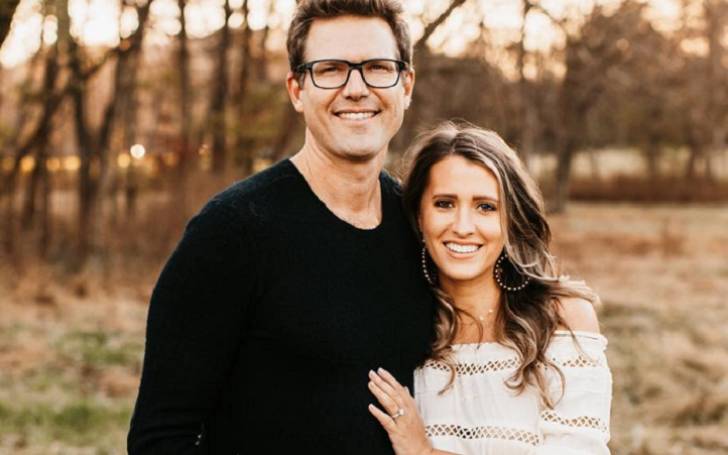 Parris Bell aka Parris Bell Stork grabbed huge attention following her marriage to Travis Lane Stork, a veteran TV personality. Parris’ hubby is better known for his appearance in The Bachelor. He is an emergency physician too, who spent over a decade working as the host of the syndicated daytime talk show The Doctors.

Besides, Pariss and Travis who have been married since 2019, are also the parents of a baby boy. In this article, we will talk more about their adorable love story.

In addition, also, take a look at Parris’s career as a lawyer and more hidden details!

Bell is aged 28 as of 2020. Born in 1992, Pariss celebrates her birthday on 24th September. She is an American as per her nationality and belongs to Caucasian ethnicity.

Talking about her parents, Bell has shared a number of photos of her father on social media handles but has yet to post a single photo of her mother. In fact, Bell is too close to her grandmother and also shares her grandma’s photos on every Mother’s Day.

Back in May 2013, the attorney posted a photo of her grandmother on the occasion of Mother’s Day. Her caption read,

“Happy Mother’s Day to the strongest, most selfless woman I know. Love you forever grandma.”

Her Grandfather Died of Cancer

Like her grandma, Parris also shared a strong bond with her late grandfather, Ralph Bell, Sr. who, sadly, passed away back in 2010. He died of pancreatic cancer. Since the tragic incident, Bell has been an ardent supporter of several non-profit organizations that mainly helps in advancing the research of the prevention of cancer.

Parris supports the Lustgarten Foundation, the organization that researches scientifically and medically regarding the treatment of pancreatic cancer patients.

Bell went to the University of Florida in 2010 and completed her Bachelor’s degree in political science in 2014. The same year, Travis Lane Stork’s wife went on to enroll at Vanderbilt University Law School, graduating with a Juris Doctor (J.D.) from the college in 2017.

What does Parris Bell do for a living? Is an Attorney

After working with the company for four months, Bell landed her first professional job, working as a law clerk at Greenspoon Marder LLP. She spent over a year with the company and then designated as a litigation attorney at Burr & Forman LLP, in Greater Nashville Area. She there worked for a couple of years (Sep 2017-Aug 2019).

As per her Linkedin profile, Parris is now a self-employed attorney.

When Did Parris Bell and Husband Travis Lane Stork Get Married? Their Secret Wedding

The couple tied the knot on 3rd August 2019. They organized their wedding ceremony in Nashville, Tennessee. Their intimate event was officiated by their close friend, Julie. A few days after their big day, the newlyweds also shared some romantic photos on their social media profiles. Bell wrote on their wedding photo, posted on 7th August,

“I married the best person I’ve ever met in front of our very closest friends and family last weekend. As if that weren’t great enough, our best friend, Julie, officiated our wedding.”

“I am so grateful for this man and for our tribe. Thank you all so much for celebrating with us!. We had TOO much fun”

Pharris opted for a romantic off-the-shoulder Rue de Seine gown. Kasey Schaffer was the planner of their wedding while their friend Gina Peterson was the main photographer.

The then-newly-minted duo went to the Hawaiian islands of Maui and Ohau for their honeymoon celebration. They also had a pre-wedding honeymoon to Costa Rica.

Besides, Harris and her spouse Travis requested all attendees in the wedding to make donations to The Cancer Research Institute and The Lustgarten Foundation for Pancreatic Cancer Research.

How did Travis Stork Meet His Wife?

The couple first met back three years ago their nuptials through their mutual friend in 2016 Dr. Chris “Cupcake” Strandburg. Talking about his role in introducing the duo, Travis said,

“It was just complete luck that we were all there at the same time. They met, they seemed to hit it off … then I helped to connect them the next day. The next thing I knew they were going on dates and I was the third wheel.”

Parris Bell is The Mother of Baby Boy

Travis Lane Stork’s wife gave birth to their first child, a son Grayson Lane Stork on 17 June 2020. The baby weighed 8 lbs., 6 oz. and measured 22 inches long at the time of his birth.

The duo announced their pregnancy back in December 2019, posting many maternity photos on their Instagram. In the picture, Bell wore a T-shirt that read “Baby Belly” while her spouse Stark printed “Beer Belly” on his T-shirt. Furthermore, they also announced the baby’s sex and due date on the Insta clip.

Parris has a considerable fortune which stands at $500,000. She makes money from her lawyer profession. In addition, Travis has an estimated net worth of $12 million.

The couple now resides in Nashville, Tennessee with their son.