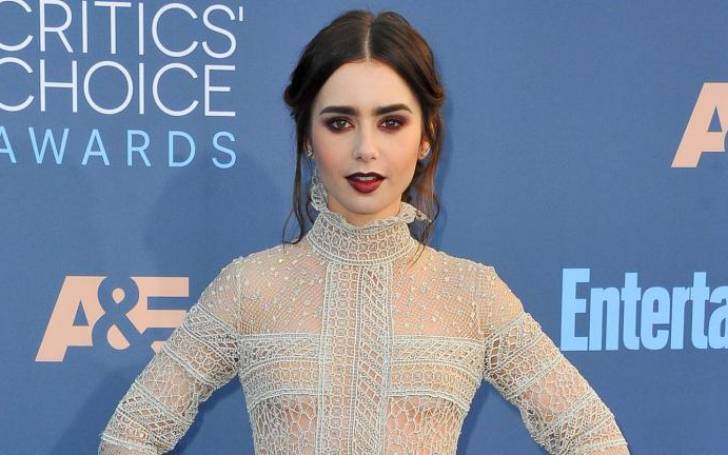 The beautiful Lily Collins is one of the most sought-after actresses in the entertainment industry. The English-American actress has been a part of numerous successful projects.

Apart from her professional life, Lily remains equally trending for her long dating history. The actress has had a few high-profile romantic affairs in the past, something not many of you might not know. Nevertheless, it all ends today as we’re going to find out about Lily Collins’ dating history.

In this article, take a look at Lily Collins’ boyfriend list, from Zac Effron to Chris Evans.

A week before dining at SoHo, they went to the STK restaurant in WeHo. Both of them attended the birthday of one of Zac’s pal. Surely, you don’t take random strangers to your buddies’ birthday parties, right?

It’s the classic, coming back to you, story. Although their relationship never got confirmed, their appearances together begged to differ.

After appearing together on Valentine’s Day in 2012, Zac and Lily were never spotted together. A source close to the duo maintained, at the time, “They were never really together, so you could say they split, but they were never an official couple.”

Time changed, things changed, and the pair found their way back to each other in 2013. A fan snapped a picture of the duo strolling in Disneyland with friends whilst holding hands.

Similarly, they even went for a movie date in Hollywood sparking patch-up rumors. Nevertheless, the duo went their separate ways soon.

Surprisingly, Lily and Zac found their way towards each other yet again. In 2019, they appeared together in the Netflix original movie, Extremely Wicked, Shockingly Evil and Vile.

The couple played the lead role and their chemistry in the movie was off the charts. Subsequently, this led fans to once again start speculating about the nature of their relationship.

Even Star Magazine claimed that an insider has revealed the pair were definitely dating. But the rumor was debunked by Gossip Cop. A source close to the pair claimed the rumors were “not true.”

This is one of Lily’s few confirmed relationships. The actress dated the Australian actor Thomas Cocquerel in 2014. They made their first appearance as they went for a dinner date at Craig’s Restaurant on February 5th.

Just a few days later, they attended the basketball match between Los Angeles Lakers and Chicago Bulls. During the match, the couple had a lot of cozy moments as they grabbed hands the entire time.

Apparently, a mutual friend initially set up the duo, and later on, they just clicked.

Us Weekly exclusively confirmed they were going out after an insider told the outlet. The insider said, “They just started seeing each other. A friend introduced them. It’s new. He is an all around great guy. She’s happy.”

Unfortunately, their lovey-dovey didn’t hold out for long and they broke up the same year.

Lily Collins Went out with Taylor Lautner for Over a Year

Lily had a 1-year old relationship with Twilight star, Taylor Lautner from 2010-11. The couple first came across each other while filming the movie, Abduction, 2011.

Even though both the party never came out and said, “we’re dating,” their co-star, Denzel Whitaker went on the record and divulged some insights into their affair.

He explained at the premiere of the movie, Warrior,

“It’s kind of like that teenage love in high school. It was kind of like, ‘Let’s go on a date.’ They were willing to go bowling. It wasn’t all about the relationship, it was more about having fun with each other and I think any time that’s the premise of your couple, it’s going to go great.”

Moreover, Taylor himself told Seventeen magazine that his chemistry with Lily was something that grew as they worked together.

Why did Lily Broke-up with Taylor Lautner?

After seeing one another for over a year, Lily split with Lautner in 2011. Though few tabloids state the couple broke up in September 2011, E! Online found out they had gone their separate ways about three months ago.

As for the reason behind their unfortunate separation, a source argued, Taylor didn’t really make any effort. He never visited his girlfriend so it was apparent to Lily what she had to do.

They broke up just a few months before their movie premiere and onlookers mentioned it was quite awkward for them at the party. Yeah, no kidding!

Lily Collins and Chris Evans: Did the pair hooked up?

Lily reportedly had a run-in with Chris Evans back in 2015. The couple first came across each other at the Vanity Fair Oscar’ Party back in February 2015.

Incidentally, a few weeks later, on 15th March, US Weekly confirmed they were dating. A source close to them said both of them are in the initial stage and are having fun for the moment.

What’s more, the paparazzi even spotted the duo grabbing dinner at the Pace Restaurant. Onlookers claimed the lovebirds were quite flirtatious, so it was definitely a date.

Nonetheless, it all ended after the duo stopped appearing together. Looks like they were not a good match, after all.

Of all the affair Lily had, none of them compares it to Jamie Campbell Bower. They first started going out in 2012 after they met while filming the movie, The Mortal Instruments: City of Bones.

They had a terrific relationship for a year before pulling the plug on it, a year later. The news of their split came in August 2013 and US Weekly first confirmed the news.

Regardless of their break-up, they remained good friends and promoted their movie together.

Reconciled in 2015 to Break-Up Again

As fate would have it, Lily and Jamie found their way towards each other in 2015, a few years after their split.

Their romance sparked once again after Phil Collins’ daughter added a series of photos on her Instagram and now-defunct, WhoSay account.

The pictures clearly indicated the duo has definitely gotten back. The caption in one picture read, “And what it is, is something quite beautiful…”

Whereas, the other picture, where Jamie is seen kissing Lily read, “Happy is what happy does. 50 shades of blush #cloud9ispinkright?…”

Lily’s romance with Jamie is something the majority of her fandom ships and they were all happy when they got back together. However, it was all short-lived, and once again, they broke up.

Lily Collins Had a Fling with Noah Centineo?

In February 2019, Lily flirted with Noah Centineo after commenting on one of her posts. This subsequently led to the entire fandom shipping Lily and Noah.

Noah added a series of photos from his Calvin Klein campaign. In one of the photos, the actor is sitting in a reclining chair with nothing but pants.

That is when Lily decided to flirt with the handsome hunk and wrote in the comment section, “I never look that good when I lounge.”

Noah then replied, “Oh please,” with a fire emoji.

What’s more, Lily and Noah even featured in a music video together, a few months before flirting.

Neither Lily nor Noah said anything about their apparent link-up.

Back when Lily was just starting out, she reportedly dated Riley Harper. For those of you who don’t know, Riley is one of Hollywood’s go-to stunt doubles. So far, he has appeared in several blockbuster movies.

In 2009, Lily worked in the film, Priest and Riley happened to be the stuntman in the movie. They clicked and dated for a year from 2009-10.

Apart from her numerous flings, the beautiful actress has reportedly hooked up with Chord Overstreet. The duo apparently dated for some time and was pictured together in a few events.

Meanwhile, the duo still remains friends, despite their split.

After numerous setbacks and heartbreaks, Lily finally found the one. At least, it looks like he is the one.

As of 2020, Lily is in a relationship with American director Charlie McDowell. In September 2019, she was spotted for the first time with her beau as they strolled together in Los Angeles.

In addition, around the same time, Lily even posted a few Instagram posts confirming she is indeed romancing Charlie.

The couple has come a long way since then and also quarantined together with their adorable pooch, Redford.

Besides, just like Lily, Charlie himself has had several dating conquests in the past.

He was linked with the Game of Thrones star Emilia Clark from late 2018 to February 2019. His other high-profile relationships include Elizabeth Moss, Rooney Mara, Kristin Chenowith, Phoebe Tonkin, and Haylie Duff.