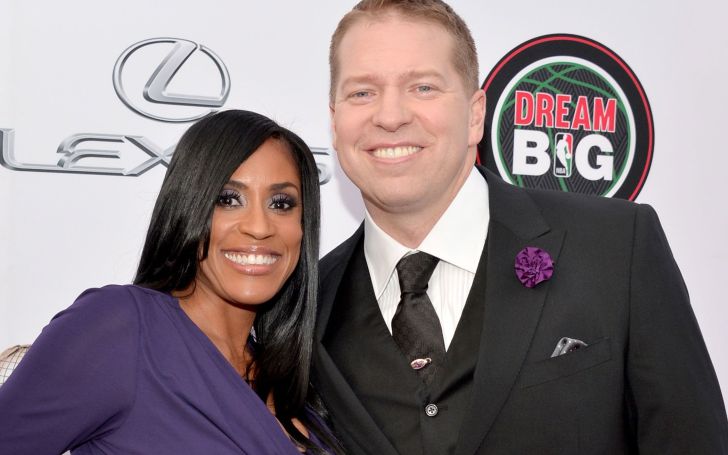 If there is any comedian who is having a fantastic marital life then it’s Gary Owen. He has been married to his wife for around two decades and not once did we hear about any problem between the two. What’s more, they are biracial couples and despite the challenges they might’ve faced earlier on, they are living a happy life.

In addition, they are also proud parents of three kids. Although one of the kids is Gary’s step-son, there’s love for everyone in the Owen family. So in honor of his long-term relationship, we’re going to give a little inside scoop into the lives of the comedian and find out some intriguing facts about him. Also details Gary Owen’s wife and his relationship with her.

Since 2003, the outspoken stand-up comedian is living a fruitful life with his wife, Kenya Duke Owen. They exchanged vows on July 19th, 2003, in the attendance of their friends and family. The wedding was actually extravagant, however, due to some unforeseeable circumstances, the nuptials had a lot of problems.

It all started when both the party were a tad bit late for the ceremony, say 20 or 30 minutes. As they got late, the Pastor walked out of the wedding. They managed to say their ‘I do’s somehow before the next trouble came barging in. During the reception, a fight broke out resulting in one punch.

Later, yet another travesty befall the duo. The five-tier wedding cake the duo had ordered was mistakenly dropped by the baker.

Well, upon reading the problems, we can say, their wedding was literally a hot mess. All in all, it was a terrible day for the couple, yet here we are.

Gary shares three children with his wife Kenya: Two Biological and one step-s0n

The couple of around two decades raised three kids in their brood, Emilio Owen, Kennedy Owen, and Austin Owen. Their eldest, Emilio, is actually Kenya’s son from her previous wedding. After divorcing her first husband, she got custody of her son. He was born on 18th, January 1991. He is in his 29. Emilio’s biological father’s surname was Toliver.

Kennedy Owen, Greg’s only daughter, and first biological child with Kenya was born on July 3rd, 2002. She is 18 years old as of 2020. Gary shares a special relationship with his daughter. During her childhood, whenever Kenya wasn’t available, he used to dress her up for school.

Talking about her education, in January of 2020, Gary took to his Instagram account to announce his daughter is officially accepted at North Carolina Agriculture and Technical State University.

Ok it’s official my daughter has been accepted to go to NC A&T next year. She told me her freshman year of high school she wanted to attend an HBCU. A&T was her first choice. So get ready @terrencej @frederickwjr @willpowerpacker that loud white guy at the homecoming game will be me for the next 4 years. #ProudDad #AggiePride #HBCU

Their youngest, Austin Owen was born on 27th November 2000. He is 20-year-old. Of all the three kids, Austin is more than likely to follow in his father’s footsteps and become a comedian. In fact, he did his very first stand-up back in June 2018 at the Tommy T’s Comedy Clubs.

If you haven’t watched it, here’s the clip!

Besides, he graduated from Heritage High School in California in 2018. Well, we sure hope he becomes as great of a comedian just like his father.

How did Gary first met his wife? With the help of Shaq?

It was in the late 1990s when Gary and Kenya Duke first came across each other. Their first meeting happened in The Comedy Store outside Sunset Boulevard, California. At the time, Kenya had just glanced at him. They didn’t exchange words or numbers. It wasn’t until their second meeting at the same club when they started talking.

During his appearance at WTLC 106.7, Gary told that it was Shaquille O’Neil who introduced them to each other. So at the time, Kenya used to work at Shaq’s clothing line up, TWIsM. It was Shaq who brought one of his staff, Kenya at the Comedy Club.

Nevertheless, their relationship didn’t start for the next 12 months. They talked on the phone for a year before Gary eventually asked her on a date. So after much talking, Kenya accepted to go out with Gary, however, she stood him out on their first date. After apologizing to Gary, this time she asked him out, and the rest, as they say, is history.

Gary and Kenya renewed their vows in 2015

As you might’ve read above that the lovebirds’ wedding didn’t go as they thought it would go. It was all round a terrible ceremony to be a part of. So in order to make up for the bad experience and make his spouse feel joyous, Gary decided to wed her for the second time.

They renewed their vows in an extravagant ceremony on 20th December 2015. At his renewal ceremony, Gary wore a black tuxedo while his bride looked radiant in a white gown.

It is not surprising to know why Gary and Kenya clicked back then. They were quite opposite and you know the proverb, ‘Opposite Attracts.’

While Gary never went out with a black chick before, Kenya too never liked the idea of going out with a white guy. During his sitdown at the WTLC, Gary also mentioned how he never even dated a woman before. Before meeting the love of his life, he’d hooked up with a white girl and that is it. On the other hand, Kenya was married before.

Despite all the challenges any biracial couple faces, especially black and white, Gary and Kenya worked together. They soldiered through any problem they came across and won it over.

Talking on the same topic, Gary once stated, “Me and my wife have been together so long, and you know race doesn’t come up that much.”

He further added, “It does — but it doesn’t come up that much. We have fun with it; we don’t take it so serious.”

Well, we wish the duo all the best for their everlasting happiness.

Kenya Duke filed for divorce with Gary in 2021: What was the reason?

One of the biggest bombshells of the year 2021 came when Kenya filed for divorce from her husband in March of the year. TMZ first broke the news of their impending divorce. Kenya filed the document at the Los Angeles County Superior Court.

What really took us all by surprise is the fact that the news of their divorce came just a week after Gary teased a new show, The Gary Owens Show wherein his wife Kenya is the center of the plot.

Since the news of their divorce broke out a lot of speculation has been going on in the media. According to Kenya, Gary was an absent father to their kids and apparently used her to gain fame. At first, both of them were quiet about their divorce but when Gary shared an Instagram post, it all went mental.

In the post, Gary is wearing a t-shirt that had the word, ‘bread-win ner’ written on it. As the word means a person who earns to support the family, many people assumed it was a jab toward Kenya.