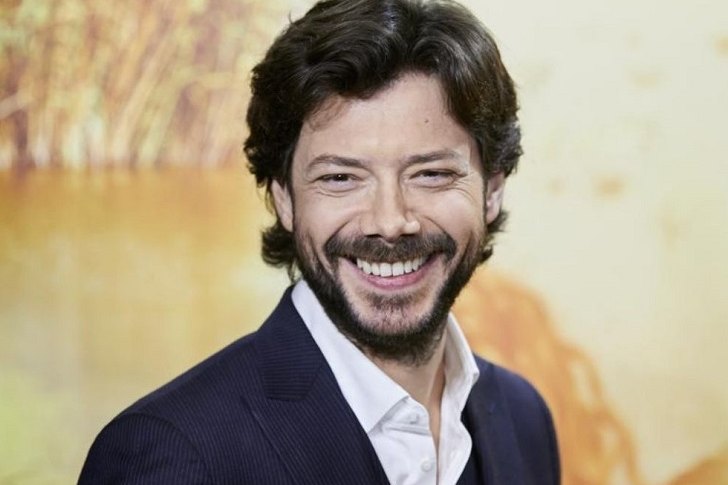 Alvaro Morte professionally embarked on the show business with a role in a Spanish medical drama Hospital Central in 2002.

Besides, Morte is happily married to Blanca Clemente. He also shares two kids with his wife. Here’s everything you should know about the handsome actor!

Who is Álvaro Morte Wife?

He is married to Blanca Clemente for years now. Alvaro Morte’s wife is a stylist by profession. She worked in the costume and wardrobe department in the movie, Campamento Flippy.

Morte and Clemente have both remained tight-lipped about their married life. Despite their long-time marriage, the two never revealed when they exchanged the vows or how it all began.

Besides, Alvaro is involved in a few business works with his spouse. He and his wife are the owners of a theatre company, 300 Pistolas. They founded it in 2010.

It’s been years that the couple is in a marital relationship and their married life is still going pretty strong.

Alvaro and Blanca are blessed with fraternal twins, a son Leon and a daughter Julieta.

They frequently go out for beautiful vacations with their kids. On 30th August 2017, the actor shared a beautiful picture of twins from their trip to Mallorca.

The family of four resides in Madrid, Spain. We wish their life remains positive just as it is right now.

Where is Alvaro Morte From?

He moved to Bujalance, a town in Córdoba with his family at the very early age of two.  There, Alvaro grew up running around olive trees.

Who are Alvaro Morte’s Parents?

Morte’s family was always nomadic. His father was a born entrepreneur. Alvaro had a close bond with his old man and often cites his father as his inspiration.

Talking about his late father, who passed away at the age of 80, Alvaro said,

My father, a born entrepreneur who was never afraid of anything or anyone, always changing his life, either. What kind of things did he undertake, why were they nomads? He did everything in his life and it was not bad

His dad was the eldest of five brothers born to a civil guard father. His mother is a multi-faceted artist. She is a painter, singer, and dancer too.

As for his siblings, Morte has two older brothers.

His Education: School and College

Alvaro graduated from the School of Dramatic Art Miguel Salcedo Hierro (ESAD) of Cordoba, Spain. He was later awarded a scholarship to study at a University in Finland.

Additionally, Morte went on to enroll at a British school, in Madrid. He eventually attended the School of Cinematography and Audiovisual of the Community of Madrid. He also got involved in a number of school programs crafting his acting skills.

Plays the main Role of Sergio Marquina in ‘Money Heist’

Alvaro snagged the main role of Sergio Marquina, a professor in the cult hit Netflix series Money Heist in 2017. He gained massive popularity for his charismatic performance and has also been the star of the series.

In the series, Morte worked alongside Úrsula Corberó, Maria Pedraza, and Jaime Lorente. He also won the Award of the Spanish Actors Union. The show first aired on Antena 3 but after its worldwide success, Netflix acquired it in late 2017.

Morte launched his career as an actor portraying a minor role in a crime drama series Hospital Central in 2002. He played Tono for a year from 2009-10 in Cuéntame cómo pasó.

Prior to his work on a small screen, Morte is also notable for his work in films. In 2018, the actor featured in Mirage and Smallfoot.

Is a Music Lover

In addition to his acting career, Alvaro also has a love for music. He plays a few musical instruments like a guitar.

Furthermore, the actor often appears playing a variety of songs with his children at home.

How Much is Álvaro Morte Net Worth?

He has earned good fortune from his work in movies and TV shows. As per some reliable sources, the net worth of Morte Morte stands at $2 million.