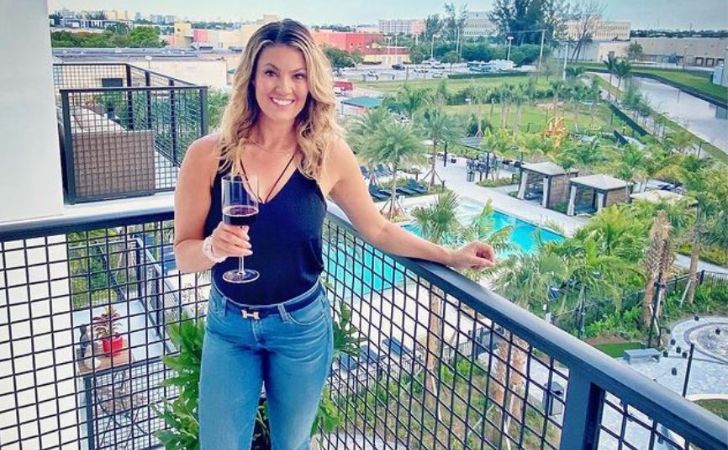 Amanda Balionis is an American sports reporter famous for reporting golf for CBS Sports. She has also worked as a reporter for news channels like ABC News Now, New York Islander, and many others. She grasped further fame after her engagement with NFL quarterback Bryn Renner.

Well, since she is already engaged, what are her wedding plans? In this article, we are going to explore every aspect of her life including details on her parents, career, social media presence, and much more.

A successful TV personality Amanda was born on June 20, 1987, in Pittsburg, Pennsylvania. She spent most of her childhood in her hometown but after she turned 10, her parents moved to Lancaster, where she spent her teenage years.

Her father Anthony originally comes from South Hills, whereas, her mother Dana is from Squirrel Hill. She shares a great relationship with both her parents.

Talking about her education, she did her high school at Manheim Township High School from 2000 to 2004. Thereafter she attended Hofstra University, where she graduated with a degree in broadcast journalism in 2008.

Amanda Balionis Career: She Is A Successful Sports Journalist

While still at the university, she involved herself in several related fields. All the while she pursued her journalism degree, she worked at WRHU radio station, The Chronicle newspaper, and was involved in some way at the Associations for Woman at Communications.

During her college days, she also did her internship at CBS 2, ABC News NOW, New York Jets, and the New York Islander. Well, shortly after graduation, she worked as a reporter for the local Lancaster Newspaper for a year from 2008 to 2009.

Eventually, Amanda tried her hand in TV and worked as a Freelance Sideline Reporter for Verizon Sports. There she covered Rutger’s Woman’s soccer and basketball. Later, she worked for MSG Network as a sideline reporter and covered the High School Game of The Week. Further, she also spent around 10 months working as the Volleyball Commentator and Feature reported MSG Varsity.

Her major project came in March 2011, when she worked as an anchor and reporter for PGA TOUR. She hosted PGA TOUR today along with other shows. Soon after this, in April 2016, she got an opportunity as a host and presenter for Callaway Golf.

The biggest opportunity in her life came in 2017 when she finally got to work for one of the top sports stations CBS Sports. With CBS Sports, she has been constantly reporting golf news and covering events as well. It has been years and she is already active with the station.

Amanda Balionis Is Engaged To Her Boyfriend Bryn Renner

Along with a successful professional life, Balionis has also been doing great in her love life. The CBS reporter is engaged to NFL quarterback Bryn Renner.

The duo announced the news of their engagement in March 2021. Amanda who is pretty active on social media took to Twitter to announce the surprise. In a photo along with her new fiance, she showed off her beautiful ring with the caption “Hey @BrynRenner …forever sounds kinda perfect”. Check out the tweet here.

But how long has she been dating Bryn? Though she has not revealed the exact details, there is a high possibility that the couple might be together since 2019.

The assumption comes from the post-Balionis shared on her Instagram on December 11, 2021. In the post, the reporter marked her two years anniversary with her beau Bryn. “2 years down, forever to go,” wrote Balionis in the caption. Here is the post.

Well, when it comes to her wedding, Amanda mentioned in the same post that this was the last anniversary for the couple as partners. It means the pair are surely going to tie the knot in 2022. However, Amanda and her fiance, Bryn are yet to announce their wedding date.

Who She Dated in the Past?

Well, Amanda frequently made headlines regarding her dating life in the past. During 2014 and 2015, the sportscaster used to take to her social sites gushing about her dating life. In fact, back in February 2014, she openly replied to a Twitter post referring her boyfriend to have a sick sense of humor. The identity of her then-boyfriend is not known though. Here is the post.

Not just this, but in 2015, with rumors of her engagement already making rounds on the internet, she posted a photo on her Instagram showing off a ring on her ring finger. But she clearly mentioned that she was not engaged. Nevertheless, she is happily engaged as of early 2022 and we hope she and Bryn lead a happily married life for years and years on.

Her Parents Met A Car Accident In 2016

If you are still unaware, Balionis almost lost her parents in a tragic car accident in 2016. After the tragic accident, her dad and mom were soon rushed to the nearest hospital and admitted to the ICU.

Fortunately, they survived. After the incident, the CBS reporter has mentioned on multiple occasions that the accident was a life lesson to her and that she has learned to live life every minute.

Besides, she shares a great relationship with her parents and leads a great life together.

How Much is Amanda Balionis’ Net Worth?

Amanda is one of the high-profile CBS reporters which implies, she is paid a decent salary for her works. Though she has not revealed the wealth she owns, sources have estimated her net worth to be somewhere around $2-$3 million.

Is She Active On Social Media?

She pretty much gives insights into her personal and professional life via her posts.