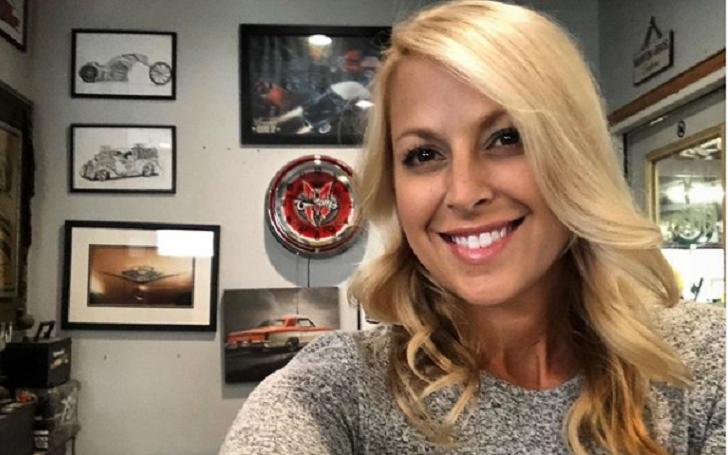 Amanda Martin is a former banker who currently works for Martin Bros Customs, a metal fabricator in Blanco County, Texas. She works there along with her husband Joe Martin, a skilled mechanical master and the winner of Discovery Channel’s ‘Biker Build-Off.’

The couple who is married for years gained wide popularity when they started highlighting their car shop Martin Bros creating their own television program Iron Resurrection, which aired on Motor Trend.

In addition to their longtime marriage, also, know does the couple have any children. Moreover, the article will provide a deeper knowledge of Amanda’s parents, siblings, and more!

Amanda Martin’s Parents Divorced and Both Remarried to Different People

Amanda aka Amanda J Keathley is the daughter of Zach Keathley (father) and Sandi Klapp Nafziger (mother). They were married for several years before the two went their separate ways.

After their divorce, her mom Sandi has been married to R Craig Nafziger, an airline Pilot/Instructor at FlightSafety International since October 2016.

In the meantime, her dad Zach is in a happy marital relationship with Evelyn Gross Keathley, a therapist at Lighthouse Counseling Services and the owner of Therapeutic Horsemanship.

How Many Siblings Does Amanda Have?

What is Her Age?

What is Martin Doing in 2022? Is a Business Partner at Martin Bros Customs With Her Hubby

Amanda is a longtime business partner at a popular motor shop called Martin Bros Customs with her spouse Joe. Other partners include Joe’s brother Jason Martin and their close friend, Jayson “Shag” Arrington. The Martin brothers first started the company which is located in Blanco County, Texas.

They took old and abandoned vehicles to restore, giving them another chance in life. All members have a different role in the business while Joe has his handful in the mechanic department and his life-partner Amanda is versatile in sales management, leadership, training, customer service, and more. She also manages the cash department of their company.

On the other hand, Shag who is dubbed “the fastest mouth in the south,” is a skilled marketing promoter. He always tried his best to get the best deals possible around Texas and many other big cities.

Is Amanda Martin On Iron Resurrection?

The beauty and brains of Martin Bros, Amanda gained wide popularity after her appearance on Iron Resurrection, a TV program. It shows their daily struggle in finding out old vehicles and dragging them back to the shop. Joe and his brother Jason first co-created the show.

The show premiered on the television network Motor Trend on 13th April 2016. It went viral from its beginning. Just after a season, they started getting hundreds of emails and phone calls from people who inform them about the different vehicles available around the city.

They have now a long list of contacts of customers to find out rare vehicles.

Sometimes, Amanda and Shag also go to Arizona and New Mexico to look for cars in addition to their prize zone Texas.

Talking more about the show, its last episode from season four aired on 8th April 2020.

What Did Amanda Do Before Iron Resurrection?

Martin has years of experience in the banking sector. She worked for Pioneer Bank, SSB for around six years. Amanda first landed her job at the bank as a branch manager in Jan 2012.

Moreover, she spent three years as a B.M. and was then promoted to vice president of deposit operations in December 2014. She held the position for one year and four months.

Martin then became the product manager from March 2016 – Nov 2017. Prior to her wide experience in the banking sector, the now-TV personality spent over four years working as a branch manager at Wells Frago, in Plano, Texas, according to her Linkedin bio.

Yes, the power couple is married for a long time now. However, they have remained secretive when it comes to their marriage. They frequently share each other photos on their respective social media handles but never mentioned when they tied the knot and how long it has been they are together as a married couple.

At present, Amanda resides in Dripping Springs, Texas with her hubby.

The duo is together for over a decade now. As for their engagement, Amanda’s then-boyfriend Joe proposed to her on the occasion of her 39th birthday in 2012.

You May Also Like: Find out about Discovery’ Gold Rush star Tony Beets Daughter Monica Beets

Her mother Sandi announced the big news via her Facebook account a few days after the birthday celebration. She also hinted in the caption that her daughter and Joe will marry soon. She wrote,

“My sweet Amanda had a birthday yesterday and a surprise proposal. Beautiful ring!! Looks like Amanda and Joe (Martin) will tie the knot soon. Couldn’t be happier for them both!”

Do Amanda and Her Partner Joe Have Kids?

Despite being in a relationship for many years, the two have yet to become parents of any children. But, Amanda is a great aunt of three nephews.

Her mom Sandi once shared an adorable photo of Amanda and her hubby, Joe, with her three grandchildren on Facebook in May 2012.

Amanda who has over 111k followers on Instagram is a dog lover. She also serves as a foster for the So Cal Pit Bull Rescue, a non-profit organization that focused on helping abused, injured & neglected pit bulls.

In addition to that, Martin is an advocate for children’s cancer research.

Amanda has earned good wealth from her various works. Her net worth is around $1 million. She mainly makes money from her partnership venture Martin Bros Customs and frequent TV appearances.

On the other side of the spectrum, her husband Joe is worth a whopping $2 million.