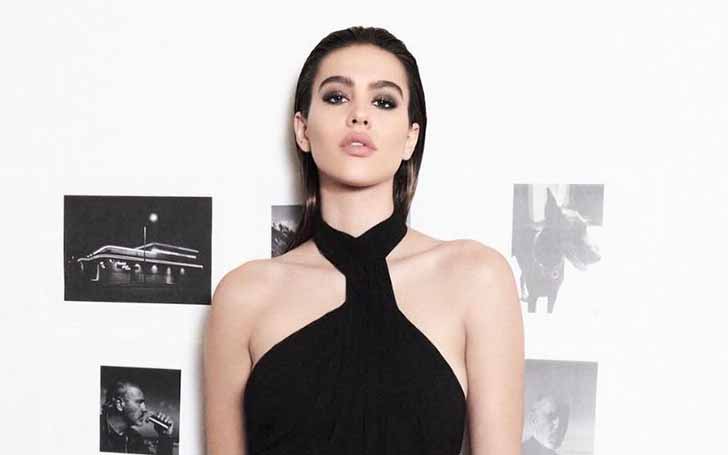 Amelia Gray Hamlin is the youngest daughter of the famous Clash of the Titans star Harry Hamlin and his third wife and television star Lisa Rinna. Her father, Harry is famous for playing Michael Kuzak in L.A. Law which earned him three Golden Globe award nominations as well.

Amelia made headlines when she started dating Kourtney Kardashian’s ex, Scott Disick. Their huge age gap of 18 years brought their relationship to the attention of many. Besides, her parents also talked about her dating life after Amelia and Scott made their relationship public. Meanwhile, Amelia is a big fan of social media where she frequently shares her photos. But, she doesn’t share much of her private life with her fans.

So, here we’ve brought all the exclusive details about Harry Hamlin. Read the article to the end to know everything about her.

Amelia was born Amelia Gray Hamlin to father Harry Hamlin and mother Lisa Rinna. She was born on June 13, 2001, in Los Angeles, California as the youngest of two children between Harry and Lisa. She is aged 20 as of 2021. Amelia has an older sister named Delilah Hamlin, born June 10, 1998.

Hamlin is an American by nationality and belongs to a mixed ethnic background. Besides Amelia has a half-brother from her father’s previous relationship with actress Ursula Andress. Her half-brother, Dimitri Hamlin was born in 1980 and is 41 years old as of 2021.

Amelia Gray Hamlin is a Model – Her Modeling Work

Amelia Hamlin, the 20 years old star kid is a well-known model as well. Even though she has only a few years of experience in modeling, she has worked for multiple modeling agencies.

According to Models.com, the 5 ft 9 inches tall model has been associated with a couple of modeling agencies such as Women/360, IMG, and Linden Staub among others. At present, she is signed to Women 360 Management New York.

Talking about her modeling work, Amelia first posed for W Magazine online in July 2017. Later that year, she modeled for IMG New York. Besides the model also posed for Vogue Taiwan editorial and Dennis Basso in 2017. Her most recent work came for the June 2021 edition of The Perfect Magazine.

Apart from being a model, she is a social media influencer too. As an influencer, she has worked for top fashion brands such as Kim Kardashian’s Skims, Levi’s, Coach, and Too Faced to name a few.

Besides her modeling work, Amelia has also made her television appearances a couple of times. In 2010, she appeared as herself in six episodes of her parents featuring Harry Loves Lisa. She has also appeared alongside her mother, Lisa in The Real Housewives of Beverly Hills. Moreover, Amelia Gray Hamlin also made her appearance on the TV series Rachel & the TreeSchoolers.

Amelia Gray Hamlin is a Popular Face on Instagram

The rising model, Amelia is a popular face on social media. She is active on Instagram and Twitter, however, she has more followers on the former platform. Where Amelia has 1 million followers on Instagram, her followers’ count just crosses the 3,300 marks on Twitter as of September 2021.

Her Earnings and Net Worth

Amelia Gray Hamlin has been modeling for some years now. In her short years in modeling, she has worked for multiple modeling agencies so, there is no doubt that she earns a whopping amount of money from her profession. However, the exact amount is not made official as of yet.

Meanwhile, many online tabloids have claimed the model and star kid worth between $1 million and $5 million. Besides her modeling works, Amelia also rakes a good amount from her TV appearances and sponsored posts on her socials.

Other than that, she also runs her own clothing brand called DNA along with her older sister, Delilah. We believe she earns well from her business too.

Amelia and Scott Disick sparked their romance rumor just months after the latter split with his girlfriend of three years, Sofia Richie. As reported the two first stepped out together at Kendall Jenner’s 25th birthday party in late October 2020.

Us Weekly reported the love interest shared similar photos of their pasta dishes at Tre Lune restaurant in Montecito, California just a week after they were spotted at Jenner’s party.

Shortly later, the duo fueled their romance rumor as they spent quality time during their beach date in Malibu where Disick was spotted wrapping his arms around his new girlfriend.

In December 2020, Amelia and Scott exchanged flirty messages on social media that further supported their relationship rumors. Meanwhile, as their romance started becoming more and more evident, many people started criticizing them due to their 18-year age difference.

Furthermore, for the New Year 2021, the alleged lovebirds jetted off to Cabo San Lucas, Mexico. Meanwhile, a close source told Us Weekly that Amelia had received the Kardashian-Jenner “seal of approval.”

Their romance was evident to their fans and media, yet they didn’t confirm their romance until February 2021. They finally made their relationship official on Valentine’s Day 2021 which they celebrated together in Miami. Disick, 38, shared a snap of him and Amelia side-by-side at dinner in his Instagram story writing “Why so serious.” Later, he wrote “Just kiddin [sic]” in a separate post.

Her Mother Lisa Rinna on Her Relationship

Amelia’s mother, Lisa remained lip-tight regarding her youngest daughter’s relationship for a long time, however, in April 2021, she did put her views on the matter. Lisa shared a photo of Amelia and Disick on her Instagram Story where she wrote “Welp we both seem to share a love of bucket hats” in the post referring to Disick’s hat.

As a matter of fact, a source revealed Lisa and her husband Harry Hamlin were skeptical about their daughter’s choice, but have since come around. An insider told seeing their daughter happy makes them happier.

Celebrated Each Other’s Birthday Together

In May, Amelia Hamlin and her boyfriend Scott Disick had celebrated his 38th birthday two days earlier. Two days later, she paid tribute to her beau via Instagram sharing a number of their photos cuddling and holding hands. “Happy birthday my love,” wrote Amelia in the caption. She further wrote,

“you light up my life and make my world better. I can’t imagine what I would do without you. thank you for being you. the most caring, loving, special person on this planet. I’m so lucky. I’m so blessed to have met you. I love you 🤍🥺🤍”

Meanwhile, less than a month after Scott Disick’s birthday, Amelia bid farewell to her teens on 13th June 2021. She celebrated her 20th birthday with her beau in Miami.

Amelia Gray Hamlin Dated A Few Boyfriends In The Past

Well, Amelia hasn’t revealed much about her relationships and boyfriends. However, some online sources have claimed that she was in a relationship with a man before she started dating her current boyfriend Disick.

Elite Daily reported Hamlin dated Mercer Wiederhorn from 2019 to 2020. Their relationship first got attention in May 2019 after Amelia’s mother, Lisa shared a snap of Hamlin and Wiederhorn attending prom together. The source further mentioned the model also shared the post on Instagram Story writing “My love” in the caption.

Amelia finally opened about her relationship with Wiederhorn in August 2020. Back then she said the two met at her sister Delilah Belle Hamlin’s apartment and they hit it off at first sight. Amelia reminisced the moment during her appearance on the Dear Media podcast saying

“We were literally just watching a movie, and then, like, I don’t know if you’ve ever had this feeling, but when he walked in, I don’t think I registered what he looked like. I was just like, him like that’s The One.”

Unfortunately, it’s unknown when the pair split and what was the reason behind their breakup.