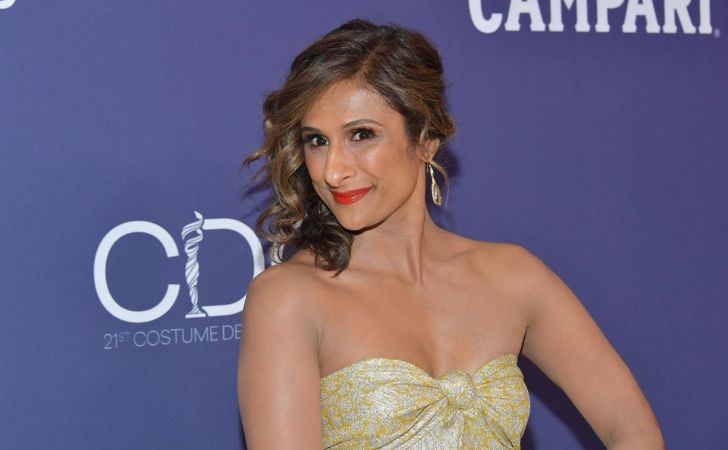 American actress Sarayu Rao, aka Sarayu Rao Blue, is known for her works in movies and TV series like Blockers, To All the Boys: P.S. I Still Love You, The Big Bang Theory, NCIS: Los Angeles, and many others. Coming from an Indian family, the 46 years old actress has achieved decent success in the film industry.

But besides her accomplishments as an actress, Sarayu is also in the media for her successful marital relationship. She is married for a while now and often posts photos with her husband on her social media handles. But do they have children together?

Also, find out about her career, parents, family background, and all the details you always wanted to know.

Sarayu Rao Bio: Her Mother Is a Poet

Sons of Tucson actress was born on March 7, 1975, in Madison, Wisconsin, United States. Though Rao is an American in terms of nationality, her parents Velcheru Narayana Rao and Nidadavolu Malathi are Indian Brahmins. Her mother is a successful poet and writes short stories and poetry in Telugu and English.

She is Pretty Close to Her mother

Like any kid, Sarayu is very close to her parents, especially her mother Malathi. In fact, she has even shared a couple of photos with her mother on her Instagram.

Explaining how her mother hates reality shows and her love for nature, Rao made a sweet post wishing her birthday on June 26.

Besides international women’s day, she wrote a lengthy post explaining all her mother did for her. Further, she also credited her mother for her success in life.

How old is Sarayu Blue?

She Has a Master of Fine Arts degree in Acting

Talking about her education, she did her high school from West High School in Madison.  Later she attended the American Conservatory Theater in San Francisco, where she received a Master of Fine Arts degree in Acting in the year 2005.

Sarayu is a married woman. She is married to the Director of Creative Development at ReKon Productions, Jonathan Blue. The couple got married on July 18, 2016, among close friends and family and are together ever since.

Five. 💕✨ Let’s keep going, @jonjonblue. This is too much fun. 📷: @amandacrean

The two reportedly met in 2015, almost one and a half years before they walked down the aisle. Now, despite over 7 years of together, the couple still has the same bond and love for each other.

They are fond of Celebrating Their  Marriage Anniversary

Sarayu loves to celebrate her wedding anniversary with her husband. In fact, on the 19th of July 2019, she even shared beautiful pics from the wedding day, on the occasion of the 5th wedding anniversary. She wrote a beautiful caption, “Five. 💕✨ Let’s keep going, @jonjonblue. This is too much fun.”

Not only this but a day later, the beautiful couple also visited their favorite restaurant in LA, to celebrate the day.

Besides, on the occasion of her 6th marriage anniversary, she made a beautiful Instagram post explaining her six years-long journeys with Jonathan. Check out the post here.

6 years married, 7.5 being a team, 4+ months quarantined together, and hot damn, I’m still so into you. Happy anniversary @jonjonblue. The night I met you I knew I liked you. A few months later I knew I loved you. I had no idea how much fun I’d keep having with you. ⁣⁣⁣ ⁣⁣⁣ (And yes, I count the time before marriage too. It. All. Counts.) ⁣⁣⁣ ⁣⁣⁣ Happy 6 years babe. Let’s keep going. ⁣⁣⁣ 💃🏾🕺🏻🍾🥂💕✨⁣⁣⁣ ⁣⁣ ⁣ 🎶: “I Like Me Better,” cover by the exquisite & insanely adorable duo, @lanacondor & @anthonydltorre 💕✨💕⁣

They look adorable together.

Sarayu Rao’s Movies & TV Shows: Made Her Acting Debut In 2002

The successful actress Rao made her acting debut in the 2002 drama film Leela. But her major role came as Senator Irving’s Receptionist in the 2007 film Lions for Lambs.

In 2011 and 2012, she appeared in two short movies Good News, Oklahoma, …Or Die, where she played Sissy, and Riz’s Wife respectively.

Her other movies include Dealin’ with Idiots (2013), Blockers (2018), To All the Boys: P.S. I Still Love You, alongside Trezzo Mahoro. Likewise, her 2020 film Happiest Season is currently in the post-production phase. Besides, she also appeared in the 2020 film To All the Boys: Always and Forever, Lara Jean.

Not only movies but Rao has also appeared in several successful TV series. Making a debut with Bones in 2005, she has appeared in dozens of TV shows.

She gained major success in TV with her role of Lalita Gupta in the 2007 series The Big Bang Theory. The series also stars Wil Wheaton among many others. Similarly, she also appeared in NCIS: Los Angeles in three episodes from 2011 to 2014.

Some of her other successful TV works include:

In 2020, she was seen in Medical Police where she played Sloane McIntyre. Currently, she is filming Mira, Royal Detective where she will voice-over a character named Palace Tailor.