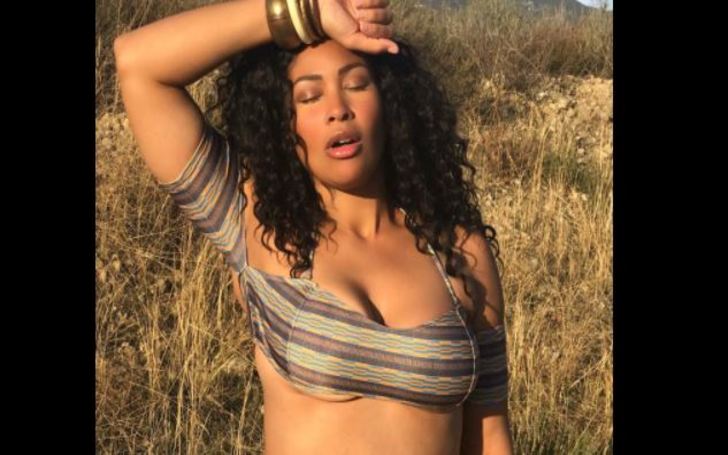 Anansa Sims is a plus-size model, TV personality, host, motivational speaker, designer, and actress. She gained recognition after having appeared on America’s Next Top Model (2003), The Mo’Nique Show (2009), and The Wendy Williams Show (2008). She is also recognized as the ex-wife of former footballer David Patterson.

Sims is also the daughter of a veteran supermodel yet a beauty icon in her own right. Although she has a modeling talent in her genes she’s more than just a pretty face and as humble as they come. She is also into using her fame to be a positive role model to young women.

Know who was she before becoming one of the most talked-about black models, the full-figured. Some additional facts from her love life, her children, and so forth.

Anansa Sims was born on December 27, 1978, in New York City, New York. She is the daughter of Beverly Johnson and Danny Sims. Her maternal grandfather was a steel laborer and her grandmother was a nurse.

Anansa’s father, Danny Sims Mr. Sims, was a music producer, publisher, and promoter. He is best known for signing the pioneers of Reggae, Bob Marley to his first international publishing and recording contracts. Sims’ father is one of the few people responsible for setting Marley on the road to becoming the first reggae superstar.

Mr. Sims lost his life to colon cancer at 75 on Oct. 3 in Los Angeles. He was also in the Army, where he played football on a team that traveled throughout Europe. He was also the owner of a supper club, Sapphire’s, near Times Square.

Mr. Sims additionally was the manager of Johnny Nash with whom he also founded a record label, JoDa, later renamed JAD, whose roster would include Gloria Gaynor, Betty Wright, and Lloyd Price.

From her father’s other relationship, Anansa Sims is also a half-sister to Jelani and Stacey.

Sims is a devout Christian and has been so since her childhood. Anansa says she has always looked up to her Mom as an example.

Her mother, Beverly Johnson was the first African-American model to grace the cover of American Vogue in August 1974. Though, despite her mother herself being a top model, she was against Anansa joining the industry.

However, once she started gaining recognition, her mother became very supportive of her decision to go into modeling. Her mother says she and Sims have posed together for pictures for her whole life.

Anansa Sims Left Her Education To Work As A Model

Sims graduated high school two years early and she decided at the age of 17 that she didn’t want to continue college and wanted to pursue modeling. She therefore only briefly attended Buffalo State College majoring in business.

While she did leave school to model, the New Yorker eventually earned her bachelor’s and an MBA and worked as a financial analyst.

After that, she returned to the glamour industry to work as a plus-size model. As for the present, Anansa Sims works for the likes of Wilhelmina Models LA.

With a sheer determination to become a model, the former student of the Buffalo State College initially lost more than 40 pounds, moved to New York, and signed with a major agency.

She however would not make it. Sims was then 24 and was living in Atlanta.

Sims secretly spent part of her sophomore year at Buffalo State College losing weight via starvation and working out four times a day. She took a semester off and went to New York, where she signed with an agency. They told her to lose 10 more pounds.

Due to more starving, more exercising and the introduction of laxatives got her a meeting with a top photographer. The morning of the big day, however, Sims collapsed in the elevator.

Sims then returned to school and regained about 20 pounds. She completed her MBA at Trinity in Washington, D.C., and began working as a financial consultant in Atlanta.

Beverly and Danny’s daughter then purchased a house. After that, she looked up plus-size modeling jobs and saw that Wilhelmina Models had a division. Anansa approached and received the job. They told her she was perfect as it is.

The New York city-born fashion personality says she didn’t book as many jobs as she booked when she was under more weight.

Anansa Achievements As A Model

Since stepping into the fashion industry, Sims, who is also a part-time real estate agent, has appeared in Essence Magazine and in an ad campaign for Ashley Stewart. The east coast native also bears all as a model for Curvation, a line of sexy as well as for functional under-things.

The now 43-year-old is also one of the eight models who posed naked for Glamour US in their Nov 2009 edition. All of the women were nude and were somewhere in the range of size 12 to 14.

The image led to an appearance on Oprah and re-energized chatter about the fashion industry’s glorification of a super-thin ideal that the majority of women never attain.

Other career highlights for Anansa include her creations of a plus-size line of clothes. The venture also focuses on swimwear and jeans.

With her mother, Sims has posed for various campaigns and in magazine spreads. They also had their own reality series on OWN, titled Beverly’s Full House. It used to tell the dynamic of the mother-daughter duo as they worked to rebuild their oftentimes rocky relationship. The show however ended after one season.

Sims left modeling for a while to gain an MBA and also worked briefly as a financial analyst. Anansa says she got to work in the corporate sector because of her Math which she describes had always come very easily to her ever since she was a kid.

Matt Barnes, a retired NBA player, and Sims reportedly met in college and had known each other for years before dating.

They exchanged eyes at UCLA through mutual friends. Though the two didn’t start dating right away. They started their relationship years later in 2017.

She And Her Partner Matt Barnes Separated Briefly

Barnes and Sims’ split became public in February 2020. This was after people noticed Sims changing her Instagram bio to “single.”

Soon after the breakup, the two spewed allegations of stalking and bitterness toward one another. The two also fought for the custody of their son, Aston Barnes.

Anansa even requested and got a restraining order. Barnes on the other hand alleged Sims was keeping their son away from him.

Sims accused Barnes of being obsessive and harassing her via text and social media. She explained while she arranged visitation for their son to see Barnes but the harassment continued so she filed for a restraining order.

Hollywood Unlocked reports Barnes saying ‘despite having a great romantic relationship with Sims, he ended the relationship because he didn’t see himself in a monogamous union.’

However, after months of social media wars, the two reconciled and got back together. During the Easter 2020 holiday, Sims and Barnes shared imaging on their social media where their blended family reunited for a playdate for the first time since their split.

Barnes also issued a public apology for the way he behaved amidst the split in a two-minute Instagram video. Sims as of recent says their relationship is better than ever.

She also said her and Matt Barnes’ relationship had been thriving since the reconciliation.

Barnes confirmed the truce in a 2021 New Years’ post of the two kissing with the caption, “A year to forget but we figured it out – HNY to you & yours.”

Thereafter, the couple has been sharing intimate family moments on their respective social media pages. They once again officially confirmed they had gotten back together in Nov 2021.

Anansa Was Married To David Patterson & Had Three Children With Him

In addition to Aston, Anansa also has three children with her former husband, David Patterson Sr, an ex-Atlanta Falcons Player.

Matt too has two children with his ex-spouse, Gloria Govan. Sims had her first child, a daughter, Ava Brielle Patterson with David in July 2011. Her second child, David Bernard Patterson III was born in November 2012.

With David, Anansa became a mother for the third time in June 2014 after welcoming a son no 2, Dean Danny Benjamin Patterson.

Anansa Sims And Her Ex-Husband Wed In 2010

Sims and David Patterson were in a marital relationship from July 2010 to 2017. They had met each other at a memorial day party in Atlanta. In the first week after meeting each other, they had five dates.

Two years later they tied the knot. Their wedding took place at the First Congregational Church, in Columbus, Ohio. Anansa Sims, her mother, and her ex-husband Patterson also starred on the OWN reality-TV show Beverly’s Full House.

Despite the fact, Sims has been in the fashion world for a considerable amount of time, the mother of four is yet to talk even the roughest of her financial standings. Nor any publications have bothered to decode what her to date monetary attainments look like.

While Matt Barnes is undoubtedly a millionaire, things get tentative when his partner’s net worth is under the discussion.

Whatever the case though, it seems is quite likely that Sims is worth south of million dollars considering several lines of cosmetics promotions, modeling gigs, and most significantly her own line of apparel.

Bianca Censori Net Worth In 2023? How rich is Kanye West’ new wife?