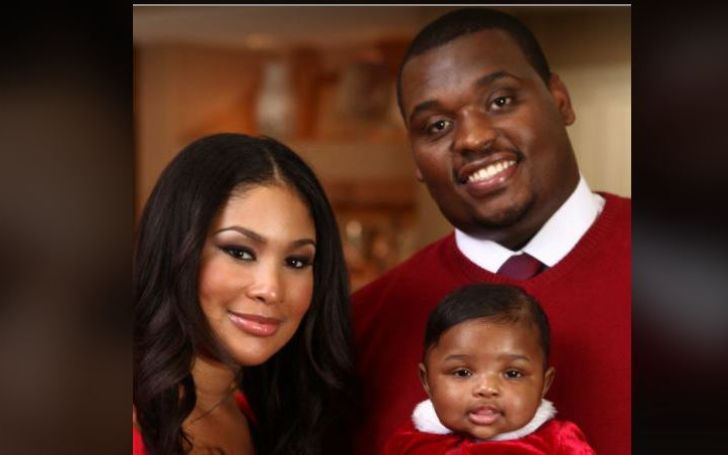 David Patterson is an ex-NFL athlete who played for teams like Atlanta Falcons and Saskatchewan Roughriders. He is also better famous as the ex-wife of a plus-size model, Anansa Sims. The couple was in a marital tie from 2010 to 2017 with three children in between.

Patterson quit his footballing dream after a serious injury and started to live a normal life engaging in some corporate gigs and businesses. While his former model-partner moved on pretty well with her new boyfriend, there is a lingering question as to what Patterson, himself is up to these days.

Know if he found someone after divorcing Sims, what he is doing professionally, and more in the details that are to follow.

Patterson was born David Bernard Patterson Jr on February 11, 1985. He is a native of Cleveland, Ohio. With a commitment to play for Ohio State Buckeyes, Patterson played college football at The Ohio State University.

The Atalanta Falcons signed Patterson in the 2007 NFL Draft. He was their Defensive Lineman. Patterson remained with the team until 2008. During the course of his time with the Buckeyes, he was a two-year starter and All-Big Ten selection.

During his final year with the Atlanta Falcons, David suffered a Lisfranc injury to his foot – what later would be his career-ending injury.

In an interview with ESPN, the Ohio State University graduate explained it was like the ligaments in his foot got spread apart and they had to take two big screws and close his foot back together.

After leaving the Falcons, Patterson with a bit of recovery started playing for Saskatchewan Roughriders (2009). He though would only play in the offseason and was the practice squad member.

After his injury forced him to quit football, Patterson became a State Farm insurance agent. He also delved himself into some other entrepreneurship ventures in Upland, California. He also briefly served as a defensive line coach for Los Osos High School.

Some other companies where he has worked include 3M as a territory manager, Stryker as Account Manager, and BD, one of the largest global medical technology companies.

Patterson’s LinkedIn states he has been working as an account manager at Inari Medical in Los Angeles Metropolitan Area since June 2021.

Patterson married the plus-size model Anansa Sims in July 2010 but would end the courtship in 2017. Their wedding took place on July 10 2010 at First Congregational Church. They subsequently had their reception at the Columbus Athenaeum.

Some other big names were Shaya Bryant-Tabb, oldest sister of Kobe Bryant, and Talani Diggs, wife of RZA from the Wu-Tang Clan. The last two were both friends of the bride and also served as bridesmaids.

For the honeymoon, Patterson and Sims took a flight to Playa del Carmen, Mexico. The former wife of the ex-NFL player said they went snorkeling, scuba diving, cliff jumping, and ziplining.

A year earlier, in 2009, his then would-be wife, Anansa Sims had posed nude for Glamour magazine along with other plus-size models and had become one of the revolutionary voices for a new beauty standard.

Former Ms. Patterson had also worked with Essence magazine and modeled in advertisements for Vassarette, a lingerie line.

How Did David Patterson And Anansa Sims Meet?

Patterson met Sims in 2008, two years before their marriage, at a party in Atlanta, where they both were living at the time. David then used to play pro football for the Atlanta Falcons.

He reportedly spotted Sims from across the room and approached her, saying he’d been trying to find the courage to say hello all evening. Sims concurred to walk outside with him to talk.

After that, they kept on talking even after the employees told them the venue was closing.

“So, we went on our first date the next day, our second date the day after . . . and we’ve been together every day since,”

Anansa said of their first meeting.

The Ohio-born former athlete then asked Anansa out for a date the very next day. That week alone they went out on five dates. After that, Anansa says they were just inseparable. David proposed to Sims in fall 2009.

“It was really sweet. We just laughed and cried together.”

By the time of their wedding, Patterson had said goodbye to his NFL career and started working as a State Farm Insurance agent.

Patterson And Sims Appeared In A Reality Show & Had Three Children

Patterson and Sims had relocated to Columbus, Ohio in the winter of their engagement year. There they started to plan the wedding. Before marrying each other, when they were still girlfriend and boyfriend, they had also briefly lived in Upland, California.

The couple ultimately chose to reside in Rancho Cucamonga, California, where Patterson opened his own insurance agency and ran it until Feb 2017.

When they were together, the two also appeared on the reality television series Beverly’s Full House on the Oprah Winfrey Network, OWN. When together, the former couple produced three children.

Sims and David had their first child, a daughter, Ava Brielle Patterson in July 2011. Their second child, David Bernard Patterson III was born in November 2012.

With the New Yorker model, David Patterson had his third child/second son in June 2014. They named him Dean Danny Benjamin Patterson.

David Patterson And Sims After The Divorce

After the separation, Sims went on to have a relationship with a retired NBA player, Matt Barnes, the same year she divorced Patterson. With Barnes, Anansa also welcomed a son named Ashton in 2018.

David, on the other hand, remained quite hidden from the media post his split with the plus-size model. Sources do report that he is an attentive father to his and Sims’ three children. Though whether he remarried, has a new girlfriend or not — that is no less than a mystery itself.

Further, the ex-insurance agent is also quite incognito over social media.

In light of the secrecy that Patterson has built around himself in the last few years, the what-about of his net worth is another cryptic point at issue.

His ex-spouse, Sims is seemingly doing good both in terms of finance and career; with an assemblage of sponsorship deals, contracts, and such.

However, the discussions in relation to Patterson’s fortune are nothing more than a matter of populations. Regardless, considering all those handfuls of experiences under his belt, six-foot-two inches tall former defensive tackle could very well have wealth worth in the region of hundreds of thousands of dollars.