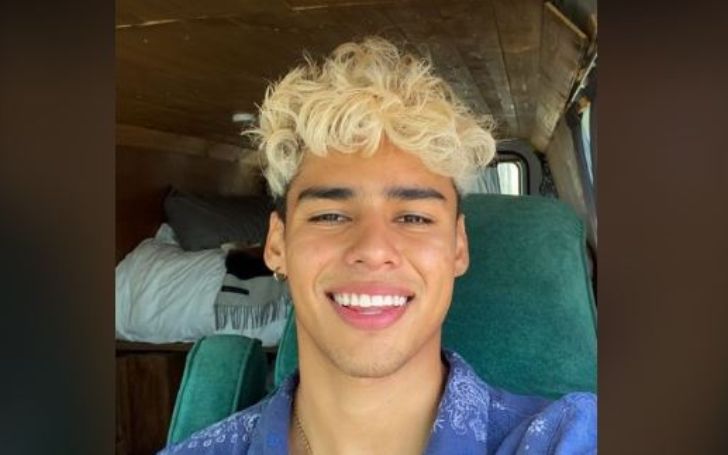 Andrew Davila is a Youtuber, Instagram influencer, and Tiktok star who is also a member of Brent Rivera’s Amp Squad. He formerly was with Sunset Park where he created videos in partnership with Stoke Twins and others.

Since the mid-2010s, Davila has been famous for his titular YouTube channel which now has almost 3 million subscribers. He is often talked about or watched for his bizarre video titles from covering his whole body with bees, making a move on his friends’ moms, pulling pranks on fellow YouTubers to even collaborating with some of them including Lexi Rivera, and Brent Rivera, among others.

Learn further about him, how exactly he became famous, how he get into Amp Squad, his relationships, and some specific details about his life and even his worth as a social media star.

Andrew Davila Is A Gen Z From Texas

Davila, (real name, David Andrew Davila), who is from Dallas Texas was born on June 26, 2000. His parents are also from Texas. Andrew is the eldest of three children; his siblings include a sister and a brother both of whom are much younger than him.

They though mostly reside in Texas. The now 22-year-old, Andrew Davila also grew up around horses which he says has always liked.

Both of his parents are Mexican. Andrew once revealed he has gone to the country several times and he still has a lot of families over there. He likewise is also fluent in Spanish.

The first time Davila went hit on the internet, the Texas-born was a junior in high school. It was because of a picture of himself that he had posted and which was something that he says had never done before.

He uploaded the still on Twitter which ultimately went viral.

The picture was later noted by a group called Boy Pages. From there on, he just kept on using social media.

“and it went viral and now that’s why I’m here,”

Ironically he never liked being in front of the camera or taking pictures at all. Surprisingly he once admitted to hating all of those. After becoming famous in high school he left his education midway through his junior year and moved to New York where he lived for about a year.

Andrew, however, went back to finish his high school but upon returning he had to redo his junior year.

Before starting his self-titled YouTube channel, Andrew was a member of a collaborative channel called Sunset Park.

The next breakthrough in Andrew’s popularity was collaborating with fellow YouTubers, Stoke Twins his fellow Sunset Park members, and also Youtubers on their own. The year they first partnered up was 2017. Stoke Twins were the first famous people Andrew had collaborated with. Though at the time, Davila was more famous than the brother-duo, 20k vs 13k.

He later became one of the content creators of Amp Studios, a talent incubator and content group from the founder and also a YouTuber himself, Brent Rivera.

He Now Is Also A Member Of Amp Squad

Andrew Davila is one of the ten people from the Amp Studios team that generated more than a billion views on social media each month. The bilingual Ig influencer initially used to post a rather dim style of videos though still very similar to what he is doing now. He later transitioned to a more bizarre sort of content, a change that he thinks is something drastic.

Davila considers switching his content style on YouTube as one of the proudest moments of his social media career. While he initially hated being in front of the camera, the son of Mexican parents now thinks social media may be a pretty long-term thing for him.

He says if there weren’t for social media he would have been into directing and more focused on his clothing line. He has a fashion brand, especially selling hoodies for men and women.

Davilla, who celebrates his birthday on June 26, really considers social media to be his dream job. Back in June 2022, in an interview with Famous Birthdays, Davilla said his dream as a social media star is to buy a house by the year 2025. Other things, Andrew said he would like to have are 5 million subscribers on his YouTube, and a car worth $5 million and above.

Is Andrew Davila Really Dating Lexi Rivera; Who Is His Girlfriend?

In April 2020, he told Awesomeness TV that he never really had a girlfriend. However, in recent years, he has been constantly linked with Lexi Rivera, a more famous Youtuber with 8 million subscribers, 20 million followers on TikTok, and 8.3 on Instagram. She is also the sister of Brent Rivera.

According to their followers, the alleged couple became sort of official when Lexi posted a video on her YouTube that had the title, My Ex Meets My New Boyfriend.

In the video, Rivera pranks her former partner, Ben by making him believe, she and Andrew are dating secretly.

Though the rumored pair is anything but confirmed in their own words. Back in April 2022, Amp Squad posted a video claiming that Lexi and Andrew were in fact dating.

As a matter of fact, Lexi and Davila’s respective social media posts, at times, do feature that the frequent collaborators are more than just internet friends.

A while ago there was an Instagram story where Davila asks Lexi if she wanted the kiss to which she says yes before Andrew shows his middle finger to her thusly implying it was just a joke.

They nonetheless have so many moments be it in the form of pictures, TikToks, or shorts all of which seemingly insinuates that they may very well be a couple already. All that has been missing though is a rock-solid confirmation from either of the parties.

Lexi was previously the girlfriend of Ben Azelart, a fellow YouTuber. They had been dating since they were mid-teenagers.

What Is Andrew Net Worth?

From being just a regular high schooler to a Youtuber with millions of subscribers, Andrew sure has come a long way. And with that, he presumedly has also amassed a lot of financial gains from each of his hundreds of videos, brand promotions, and however the ways, the social media are famous for raking in. After all, he literally pays tens of thousands of dollars just to know the deepest secret of his friends.

One of his income avenues also includes his own line of fashion brands (clothing line).

If not anything at all, by default his close to 3 million subscribers are almost always guaranteed to bring him hundreds of thousands of dollars monthly. That being said while merely an assumption, Davila’s net worth from his social media career alone should be anywhere from six figures to even around $1 million.