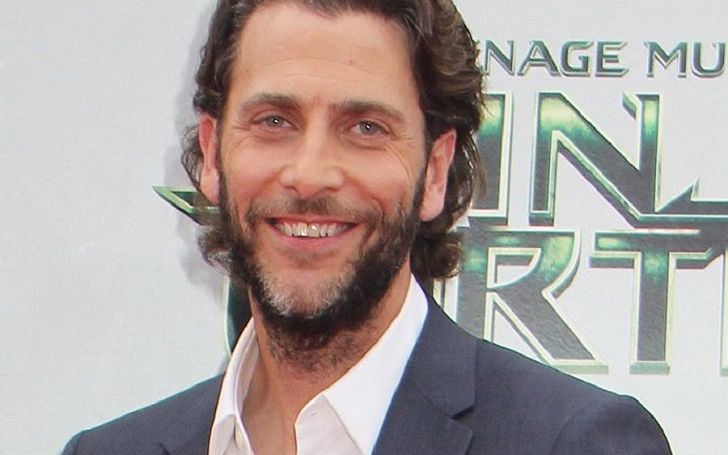 Andrew Form is one of the most popular producers in Hollywood. He is predominantly notable for his work in movies like A Quiet Place (2018), A Quiet Place Part II (2020), and The Teenage Mutant Ninja Turtles (2014).

Apart from being a renowned producer, Andrew is also recognized as the ex-husband of the Fast and Furious Star, Jordana Brewster. The ex-duo who married for over a decade, however, called off their long-time marital relationship in 2020. The former flames also shared two children who were conceived via surrogacy.

In addition, Jordana’s ex-hubby Andrew Form attracted further attention after his relationship with his new girlfriend-turned-fiancee Alexandra Daddario came to the public. So, let’s find out how did Form and Daddario first meet? Are they still in a relationship?

Here is everything about Andrew’s professional and personal life!

How Old is Andrew Former?

As of 2022, Andrew is 50 years old. Born in 1972, Andrew celebrates his birthday on 3rd February. He was born in Long Island, Newyork under the sign Aquarius. The producer holds American citizenship and belongs to the Caucasian ethnicity.

What is the Height of Andrew Form?

Andrew was born to his parents, mother Joann and father Fred Form. He belonged to a middle-class family where his dad worked as an accountant whereas his mother was a housewife.

Looking at Andrew’s successful career, the producer seems to be a well-educated person. Belonging to an average family, Form must have enrolled in some local college.

Form and his ex-spouse Brewster first met in 2005 on the sets of “The Texas Chainsaw Massacre: The Beginning.” Andrew was one of the producers and Jordana was an actress in the movie. Shortly after there, the ex-mates started dating secretly.

According to People, the Fast and Furious star told InStyle Weddings,

“We started dating in secret- you know, hanging out in my trailer- because it would have been unprofessional otherwise.”

The actress further added Andrew usually wore the same work boots to the set and she “would look for his shoes” to check if he was at work. It used to make her feel comfortable as she knew her love was nearby.

After some time of their love relationship, Jordana’s then-boyfriend proposed to her, giving her a 3.2-carat emerald-cut diamond and platinum ring. Andrew and his partner Jordana exchanged rings on November 4, 2006, making their secret relationship public with their engagement.

The 50-years-old producer married his former wife Jordana Brewster on 6 May 2007 after a year of their engagement. The couple exchanged the vows in a beautiful setting in the Bahamas.

Moreover, Mr. Form and Brewster also had a private Caribbean wedding ceremony on Nevis Island which was attended by their close friends and family members. Andrew wore a white suit, while his ex-partner Jordana wore a gorgeous white Vera Wang Dress.

The duo then spent their next several years with tight bonding as a husband and wife and also became parents of two kids too.

Both of Andrew’s Children Were Born Via Surrogate

Many of you may not know the fact that both of Andrew’s children were not naturally conceived. Form and his mate Brewster had them through surrogacy.

The two welcomed their first bundle of joy, Julian Brewster-Form on September 11, 2013. Prior to his birth, the Fast and Furious star in the January 2013 issue of Latina said, she wanted to have two kids. As she herself grew up with her sister and her dad was a twin, the actress also said she always loved the idea of having twins.

What’s more, after about three years, the duo announced their second son’s arrival on June 9, 2016. Andrew and Jordana named him Rowan Brewster-Form. Their younger son was born via gestational surrogacy. Even though the process wasn’t easy for the then-pair, they were delighted with his arrival.

Now, you guys must be wondering why did they choose surrogacy? Well, read the sub-heading below to find the answer.

Andrew Form’s then-wife Jordana Brewster to Yahoo! Parenting talked about her situation back then when her elder son was 2. She said since she couldn’t naturally conceive a child, there was no any option than IVF. For those who don’t know what IVF is, it is a complex series of procedures used to help with fertility.

The actress said, “it wasn’t a choice” but a need to do so. She didn’t feel judged but rather awkward when the other mothers talked about their pregnancy experiences.

The “lovebirds” of Hollywood decided to end their courtship after 13 years of nuptials. Andrew’s estranged wife filed a divorce in Los Angeles County Superior Court at the end of June 2020.

Though the reason behind their separation is not transparent yet, the couple said the decision was mutual. The former pair was, however, left with the settlement of child custody and relatable support matters. Later, the divorce was finalized in June 2021.

Andrew is now in a relationship with his new girlfriend, whereas his ex-wife has also moved on with her new boyfriend. Both of them are doing great with their new life and are living happy life.

Who is Andrew Form’s New Girlfriend? Their Age Difference

Following his divorce from his former partner, Andrew is currently in a beautiful relationship with his girlfriend-turned-fiancee Alexandra Daddario.

The girlfriend and boyfriend who has a huge age difference of 14 years reportedly started dating in 2020. But, they have kept their dating life too secret. Form’s partner Daddario posted their first photo only showing their foot on Instagram on May 2, 2021. She wrote a long caption that started as, “They didn’t have any eclairs” “…All I wanted was an eclair.”

Andrew’s sweetheart always hinted to her fans about her relationship with her fiance through her now and then posts on social media. Moreover, they were also seen in the premiere of Alex’s HBO television series “The White Lotus.” The same day, Alexandra posted the couple’s photo on her Insta with a caption, “The only things I want touching my body are @dolcegabbana and Andrew Form.”

After dating for about six months, Form and Daddario exchanged rings in July 2021. On 2 December 2021, The White Lotus actress made a post with a photo of her and Andrew on her Instagram to reveal their engagement.

Alexandra in her caption mentioned Form as the “absolutely most wonderful man” who handles nonsense, loss, life, difficulty, and people, with grace and compassion. She further wrote that her boyfriend has “taken the worst moments of her life and soothed them,” and just knowing he “existed when they happened makes her heart fuller and more pieced together.” In the end, she finished with the line, “Andrew- you are the greatest, most formidable love of my life. I couldn’t be luckier.”

Furthermore, Mr. Form’s companion to PEOPLE stated that it feels so exciting and mostly peaceful to be with him. She further expressed her gratitude saying she is very happy and lucky to have him. Also, looking at the Purge producer’s beloved’s feeds, we can say the pair is totally into each other. The bride-to-be is all set to say, “I do.”

Talking about their wedding, Daddario confesses her desire “to get married at the Elvis chapel in Las Vegas,” but she says “it’s hard to convince.” This will be the second marriage of Andrew Form and the first one for Daddario.

As for a fact, his fiancee Daddario was previously engaged to Logan Lerman in 2016 but they called it off later. Furthermore, the actress was also in a relationship with the TV personality Ari Melber.

While digging into Andrew Form’s information, we have discovered that he is not a big fan of social sites. Regardless, the producer is active on Instagram and Facebook. But, Form rarely posts about him on his handles.

On the other hand, his present partner is quite active on her Instagram with 22.5m followers as of 2022. She often posts her photos along with her fiance Andrew on her wall.

What does Andrew Form do for a Living?

As we mentioned earlier, Andrew Form is one of the well-known producers in Hollywood. He previously worked as a PA for many producers like Jerry Bruckheimer and Don Simpson to craft his promising producing skills.

With his dedication and experience over the years, Andrew was able to gain success from his first productions such as “The Making of Crimson Tide,” Trading Favors,” and “Kissing a Fool.” He gradually started showing his interest in horrors and received his breakthrough from the movie “The Texas Chainsaw Massacre.”

The producer has since released several hits resulting in the production of Friday the 13th, The Last Ship, The Purge, A Quiet Place, and many more. Currently, Form is also co-founder of the Platinum Dunes production company with his fellow filmmakers Michael Bay and Brad Fuller.

Related: Alexandra Daddario’s Boyfriends: List of Men She Has Dated

Looking at the successful career of Andrew Form, the producer must be playing in millions. He has a net worth of $30 million as of 2022. No doubt, he has made this fortune by producing numerous hit movies and through his production company.

Meanwhile, his fiance Alexandra Daddario has total assets of $10 million, whereas his ex-wife Jordana Brewster has a net worth of $20 million.