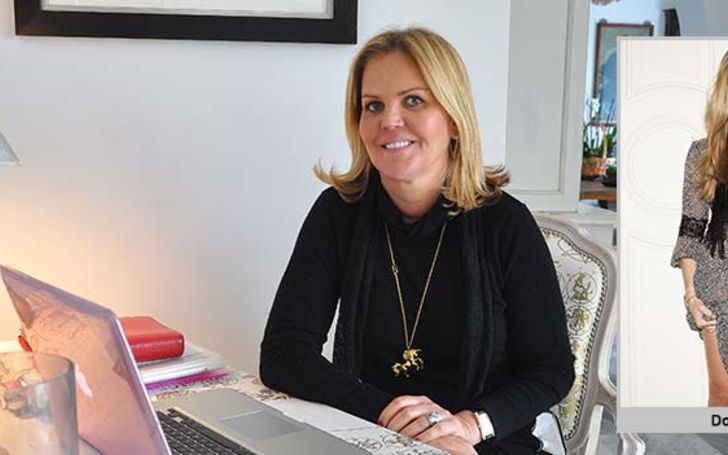 Anette Qviberg is a Jewelry and interior designer and a fashion stylist by profession. But she gained recognization, not for her professional accomplishments but for her relationship. The beautiful lady Anette is the former wife of Swedish actor Dolph Lundgren. Moreover, Anette also shares two daughters with her ex-husband.

Though she is divorced from Lundgren for a long time, the duo still seems to be in an amicable relationship. Here is a comprehensive account of Anette’s life before and after her divorce from her husband Dolph.

Further, we will also talk about her age, career, relationship with her children, and her net worth as well.

The interior designer Annette was married to Swedish actor Dolph Lundgren. The couple exchanged vows in 1994 and shared an adorable relationship for a while. But unfortunately, due to some unexplainable reason, the two decided to call it quits and got divorced in 2011.

Well, before their split, the couple lived quite a luxurious life together. Initially, they lived in a rented apartment in Marbella, Spain after which they bought a beautiful family home.

Despite being a celebrity, Dolph reportedly took on a decision to live in Marbella and not anywhere near Hollywood to give their children a normal childhood.

The former couple is a proud parent of two daughters.  Their older daughter Ida Lundgren was born on April 29, 1996, in Stockholm, Stockholms län, Sweden. Ida is an actress and has appeared in the 2009 film Command Performance along with her father, Dolph.

Likewise, their youngest daughter Greta Lundgren was born on November 30, 2001. Needless to say, both of her daughters share an incredible bond with her. The girls often post beautiful pictures of their mother on different occasions.

Back in May 2009, three masked men broke into Dolph’s ex-wife’s residence. The intruders reportedly tied her up and threatened her until they came across a family photo consisting of Dolph after which they fled.

While the incident didn’t have any serious physical harm, it took a toll on Anette, emotionally. Her elder daughter Ida who was also present during the incident suffered from PTSD.

Though the masked men were never identified, Anette’s husband Dolph stated that the intruders could be Eastern European. Dolph even tried investigating through his contacts in Bulgaria but to no avail.

Though Anette and her husband Dolph divorced in 2011, they didn’t compromise with their parental duties. The ex-couple stayed together in order to provide their children with a normal childhood.

In August of 2017, the family spent a beautiful day in Marbella, Spain. The Expendables actor flaunted his six-pack abs at the beach as the mother of his kids and his older daughter showed off their bikini bodies.

Anette wore a blue matching pair of bikini, whereas her daughter showed off her hourglass figure in a strapless black bikini.

Her Ex-Husband Dolph Lundgren Had Multiple Relationships After Their Divorce

After divorcing from ex-wife Anette, Lundgren has had multiple relationships. Shortly after his divorce, he moved to Los Angeles where he began dating Jenny Sanderson, a karate champion.

Despite 24 years age gap, the couple shared a decent relationship. They were often spotted together on several occasions. Dolph was once spotted with Jenny at the Chateau Marmont after an intimate meal over the weekend.

There were also rumors that they were secretly engaged. However, their relationship too came to an end and they broke up in 2014.

Dolph is engaged to Norwegian personal trainer Emma Krokdal. The 64-year-old announced the news via a post on his Instagram on June 17, 2020.

The new couple has been out and about ever since. They were also spotted in Los Angeles numerous times together.

Just like his previous affair, this time as well Dolph has a considerable age gap with his girlfriend. His fiancee is in her 20s.

Is Anette Qviberg Dating Anyone After Her Divorce From Dolph Lundgren?

Like her former spouse, Anette aka Anette Lundgren has now moved on with her new partner. She is now dating her new boyfriend named Carlos Lara Sanchez.

Although both of them are silent about their initial romance, looking at their social media photos, it looks like Anette and her partner Carlos are together since 2013. They have shared a number of their photos on their Facebook and Instagram since the year 2013.

Talking more about Anette Qviberg’s new partner, Carlos is now the co-owner of The Village sxm. He also serves as a coach at Marbella Hill Tenis Club.

Besides, Carlos is from Marbella, Spain who studied at Universidad de Málaga.

How old is Anette Qviberg?

What is Anette Qviberg doing in 2022?

As we have mentioned above that Anette is a jewelry and interior designer. She has even mentioned herself as an Interior designer on her Instagram account where she has over 4k followers as of 2022.

She is also a fashion stylist.