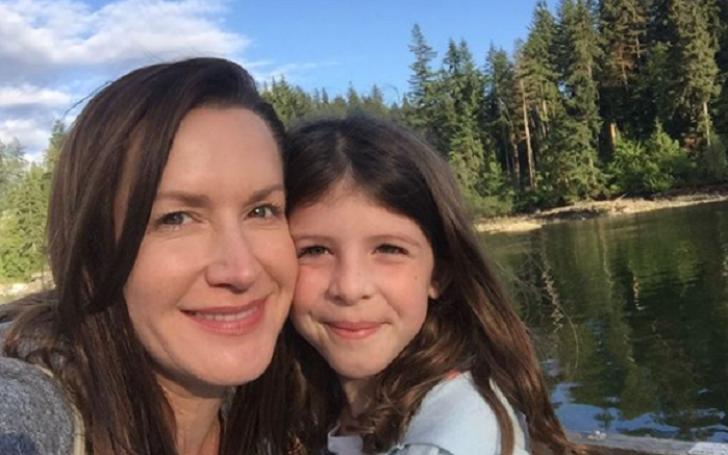 Isabel Ruby Lieberstein is the only daughter of the actress Angela Kinsey and writer Warren Lieberstein. Her parents were married for several years before splitting. But, even after their separation, the two remained close friends for their daughter’s benefit.

Besides, when you are born as a celebrity kid, it is natural that fame comes itself. But most of the star kids prefer to stay out of the public glare. Then, what about Isabel?

In the article, we will focus on her family and also explore many other unknown facts including her love for music and more!

A representative for her parents Angela and Warren said Isabel was born at 12:50 pm. Her mother’s best friend Jenna Fischer was also at the hospital.

Kinsey initially announced her pregnancy in November 2007. She confirmed the big news through her Myspace blog, writing,

“Yes folks . . . I am pregnant. [My mom] has already sent me baby booties and is quilting like a mad woman.”

The star kid belongs to American nationality and has a Caucasian ethnicity.

Angela and her husband Warren tied the knot in June 2000. The couple led a happy matrimonial relationship for several years before the two went separate ways in 2010, a year after their daughter’s birth in Feb 2009.

In June 2010, The Office actress Angela filed for divorce from her husband, citing irreconcilable differences at the L.A. County Superior Court. She asked for joint legal and physical custody of their girl in her petition.

Kinsey’s rep said the couple separated on mutual understanding and they would, “continue to be friends and spend time with their daughter.”

Despite their divorce, the pair cordially takes care of their girl and frequently goes out with her to spend some quality time together.

Isabel has two step and two-half-siblings

Isabel has two step-brothers Cade and Jake from her mother Angela’s husband Joshua Snyder‘s previous marriage. Angela and Snyder announced their engagement back in August 2016. They got married on 13th November 2016. Lieberstein also attended the wedding ceremony.

The pair don’t have their own children.

“Our wedding was more than just two people coming together, it was a family coming together. Josh and his sons and my daughter and I. We were so proud of our children. They each wrote something to say during the ceremony.”

Isabel has a close relationship with her step-dad and brothers. They frequently attend various events together. Back in early 2018, the whole family appeared at the Regency Village Theatre for the premiere of Warner Bros. Pictures’ “Paddington 2.”

Furthermore, the actress told that her hubby Snyder is “an excellent dad.” She maintained,

“I am so incredibly fortunate that I have a great partner in Warren; he’s an excellent dad. We have a really wonderful relationship co-parenting, and I’m thankful for that.”

On the other side, her two half-siblings came from her biological father Warren’s second marriage with Audrey Wauchope, a TV producer. The two have been married since 2016. But, the couple has kept the details of their kids behind closed doors.

In a chat with PEOPLE Moms & Babies in 2010, Angela revealed something very interesting about her daughter. She described her girl as “chatty and curious and exploring.”

Furthermore, Kinsey told that Isabel is a nature lover who has a great attachment to the moon and star,

Besides, Ruby loves reading. Her aunt taught her in kindergarten and first grade.

Isabel’s interest in music was influenced by her father. He is quite great at playing music and making playlists. Especially, Warren loves to listen to Elvis music, so Isabel is herself into Elvis too.

Moreover, the little girl took a music class and practiced guitar too. Her favorite song is “Bingo.”

Some other interests of Isabel are following

What is Her plan for the future?

Judging by the aforementioned bunch of interests Isabel, 14, has shown in, it is hard to confirm in which she will be focused primarily in the future.

But, her mother Angela once said she will staunchly support her daughter’s interest in whatever she is in.

Take a close look at her parents’ professional accomplishments

Let’s start with her mom Angela, an accomplished actress. She scored her first TV role, Simone, in Step by Step in 1998. The entertainer made her major breakthrough after her main role Angela Martin in The Office (2005-13). Her prolonged performance on the show also won twice Screen Actors Guild and one TV Land Award.

Her other TV projects include Hollywood Game Night, New Girl, Celebrity Name Game, and more. Besides, Kinsey has worked in several movies like Laid in America and Haf Magic as well.

Meanwhile, her dad Warren, the younger brother of Paul Lieberstein, is a writer and producer.

Her Dad and Mom’s Net Worth

Angela has an estimated fortune of $12 million as of 2022. Her major source of income is her acting career. In the meantime, her dad Warren’s net worth is $1 million.