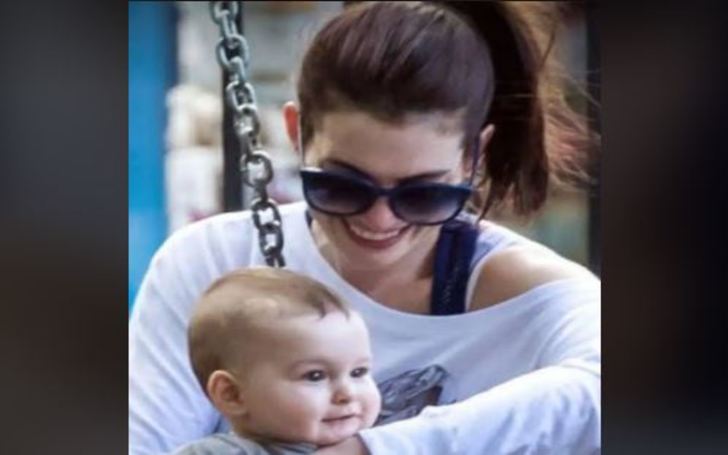 Jack Shulman is the youngest son of actress Anne Hathaway. Jack’s mother, Hathaway is known for portraying Mia Thermopolis in the 2001 Disney film, The Princess Diaries. She is also famous for other critically acclaimed movies and series like Brokeback Mountain (2005), The Devil Wears Prada (2006), The Dark Knight Rises (2012), Modern Love, and others.

Jack Shulman’s mother is also an Academy Award, a Golden Globe Award, and a Primetime Emmy Award. She was among the world’s highest-paid actresses in 2015. Additionally, her films have grossed over $6.8 billion worldwide.

Off the screen, the New York-born actress is quite reticent especially when it comes to her husband and children. Jack is the newest member of her family. And she has been famously secretive about him. Though the actress-mother has opened up about him and his brother on only a few occasions. See what she has to say about her second son, Jack Shulman as well as his brother, Jonathan Shulman.

Jack Shulman Has A Lot Of European Ancestry

Jack was born in November 2019. His Academy-winning actress-mother showed someone a photo of her newborn at the Critics’ Choice Awards on January 12, saying, “This is him.”

The tabloids first got to spot the Modern Love actress’ second son in January 2020 in Connecticut alongside her husband and elder son, Jonathan.

His actress mother, Anne Jacqueline Hathaway is a native of the Brooklyn borough of New York City. Jack’s maternal grandfather Gerald is a labor attorney, and his grandmother, Kate (née McCauley) is a former actress. Jack’s great maternal grandfather was WIP (AM) Philadelphia radio personality Joe McCauley. From his mother’s side, he has part Irish, French, English, and German ancestry.

When Anne Hathaway Announced The News Of Jack’s Pregnancy?

Anne Hathaway announced that she was expecting her second son Jake in July 2019. The actress did so by posting a mirror selfie via Instagram. In the caption, the Devil Wears Prada star wrote,

“It’s not for a movie. #2. All kidding aside, for everyone going through infertility and conception hell, please know it was not a straight line to either of my pregnancies. Sending you extra love.”

Hathaway didn’t even share Jack’s gender until someone heard her saying “this is him” to somebody close to her at the 2020 Critic’s Choice Awards.

Likewise, the actress didn’t share his name until nearly a year later, when Hathaway appeared on Live With Kelly and Ryan and Kelly Ripa called him “Jack.” In the interview, Anne said she was pregnant with Jack when she was working in the Witches.

Many people believe Jack’s actress-mother follows The Church of Jesus Christ of Latter-day Saints or LDS. She, however, grew up Roman Catholic. But at age fifteen, the Dark Knight Rises star’s relationship with the Catholic Church changed after learning that her older brother, Michael, was gay.

Jack’s mother admitted she considers “really strong values” and stated she wished to be a nun during her childhood. Though she said acting was always a high priority for her.

Who Is Jack’s Father?

Jack’s father, Adam is an actor and producer. He is known for playing Paul O’Bannon NBC’s drama series, American Dreams.  His other notable credits include roles in shows and films like The West Wing, The Dukes Of Hazzard: The Beginning, The Gold Lunch, and Ricki And The Flash.

The father of Hathaway’s children is proficient in a range of designs including butterfly pendants, hanging light bulbs, constellation-inspired baubles, feather details, and more.

When Did Jack Shulman’s Parents Marry?

Jack’s parents, Hathaway and Shulman got engaged in November 2011. Prior to that, they were dating for three years. They had their wedding in Big Sur, California, in September 2012. That same year, the Princess Diaries star revealed she had wanted to be a mom since the age of 16.

Jake has one older brother, Jonathan Rosebanks Shulman. His parents, Hathaway, and Shulman welcomed Jonathan on March 24, 2016, four years after they tied the knot in Big Sur, California.

During an interview with Jimmy Kimmel in Jan 2019, Hathaway revealed her eldest son hates her voice. She said she was not allowed to sing in her own house because of Jack’s older brother.

Is Jack Shulman Going To Have More Siblings?

While Hathaway has two of her own kids and many might see it enough as it is, there’s a possibility that Jack could get a younger sibling/s.

In December 2012, when she hadn’t become a mother, Anne told UK Telegraph,

“I’m 30 and I want to have a family of a certain size. Look, I’ll start with one healthy kid, but I’d like to have a few naturally and adopt. I gotta get on it, you know?”

She at the time made it clear that she would like to have as many as she can afford. However, to her, it’s not just financially but in terms of time because the actress said she wanted to make sure each one feels special. The Interstellar actress added she had one goal in mind for years, which was to ‘get a movie, get a movie, get a movie.’ But after the marriage, she admitted it transitioned to, ‘Get a baby, get a baby, get a baby.’

When asked about baby no three though, Shulman’s wife said, “I don’t know.”

To Jimmy Kimmel, she said the world is really scary and admitted how she’s minutes, ‘Yes, absolutely,’ while the other time, the world scares her too much.

His Mother, Hathaway On Motherhood

In Oct 2020, while talking with Vogue, Jack’s mother revealed how difficult it was for her to gain motherhood.

She revealed she was unable to conceive a child of her own multiple times. Keeping that in mind, she said “for everyone going through infertility and conception hell, please know it was not a straight line to either of my pregnancies. Sending you extra love.”

To Daily Mail, the mother-of-two told that she felt “tormented” whenever she saw pregnant women while she was trying for another baby. She said each time she was trying to get pregnant, it wasn’t going her way, someone else would manage to conceive.

And although she knew intellectually that it didn’t happen just to torment her, she felt like it was.

Meanwhile, the actress said she planned to go with the flow when it comes to motherhood, saying: “The kind of mother I’ll be depending on the kind of children I have.”

When Jack was 1 and Jonathan 4, their actress mother said how it was going for her handling two boys. With People, the actress said despite the occasional disruption within her family of four, she is thoroughly enjoying the ages her boys are at now.

“So 4 and 1, the ages are the ages that they are but there’s a lot of magic in those ages,”

It has been some time since people started to believe Anne Hathaway has some sort of connection to the 16th-century English playwright, William Shakespeare. The speculations stemmed from the fact that Hathaway’s name is the same as that of Shakespeare’s wife. Accordingly, people have been willing to consider Jack’s mother directly hails from the Rome and Juliet’s writer’s bloodline.

Some even believe Anne’s husband could be a reincarnated William Shakespeare. However, the actress, herself has never mentioned this hearsay and it also is highly improbable that Jack carries the ancestry of the famed Bard.

Jack sure is born to a wealthy family. His mother has an estimated net worth of over $80million. She is also among the most profitable Hollywood stars. What’s more, the actress apparently owns several estates each of them with the value of over millions of dollars. For what it’s worth Jack and Jonathan are going to have a pretty relaxed life money-wise. The kids possibly also might get to enjoy above the average lifestyle.