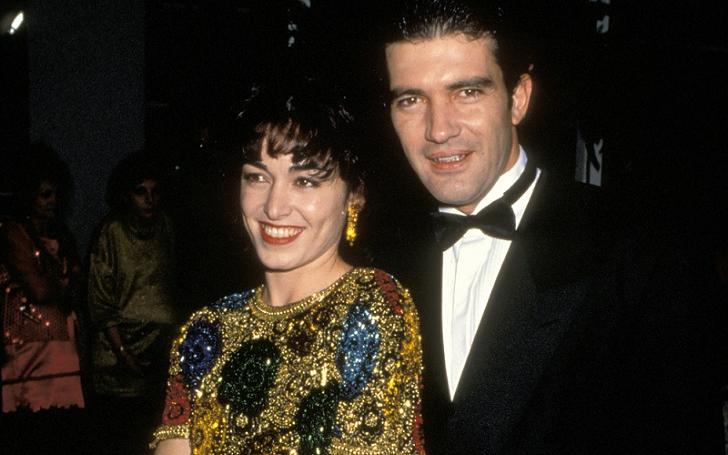 Ana Leza is a Spanish actress who worked in a few movies and TV shows. She came into the limelight after her marriage to Antonio Banderas, one of the best Spanish actors.

The actor couple was married for several years before they went their separate ways. Leza is currently in a blissful marital relationship with her second husband.

Here what you need to know about Antonio Banderas’s ex-wife Ana!

When did Ana Leza and Antonio Banderas get married? They dated for several months before nuptials

The couple married on July 27, 1987. Their wedding ceremony was held at the Church of San Nicolas in Madrid. Spanish filmmaker Pedro Almodovar also attended the big event.

Leza and Banderas dated for several months before they exchanged vows. The two also made numerous public appearances together. In October 1992, they attended the ‘Reservoir Dogs’ New York City Premiere at the Loews 19th Street Theatre.

Besides, Ana initially helped her husband a lot to find a prime spot in Hollywood. He was quite poor in the English language but his partner Leza taught him. Antonio told Vanity Fair,

“She helped me translate the script for Los reyes del mambo , to work on it, she gave me a lot of confidence. Without her I would not have gotten the role.”

Leza also said she speak the language fluently while her then hubby didn’t,

“It was essential that I accompany him to the United States, because he did not speak a word of English and I speak it fluently.”

Despite their early whirlwind romance and staunch support to each other, their marriage didn’t sustain for long.

The couple separated in the mid-1990s

The couple divorced after nine-year of their matrimonial relationship in 1995. After the divorce finalization, she received their house located in Madrid, which was valued at $3,995 million. Further, Ana received 12,000 euros ($14,098.98) as alimony per month and 50% benefits from all the movies Antonio starred in during their marriage.

Talking about the reason behind their split, it was probably Banderas’ new romance with his second wife Melanie Griffith. The couple first met during the shooting of the 1995 movie, Two Much. They subsequently began dating and married on 14th May 1996 in London.

Antonio and Melanie also have a daughter, Stella del Carmen Banderas, born on 24th September 1996. Stella appeared in her father’s directorial debut Crazy in Alabama (1999) with her mother Griffith.

However, Banderas’ marriage with Melanie didn’t last either. They divorced amicably separated in 2014.

Who is Ana Leza Second Husband? They have two children

Leza married her second husband, Dharman Villareal on 26th November 2000. Their wedding ceremony was held in Santa Barbara, California. Veteran actress Carmen Maura was one of the guests. Ana opted for a white dress with a veil and a bouquet of flowers on their big day.

Ana’s hubby Villareal is from Ojai, California. He currently serves as an editor and documentarian at the Xerox company. They are also proud parents of two daughters Clara María and Sofía Macarena.

Besides, the family of four is actively involved with the mystical organization of Hindu origin Siddha Yoga Meditation (aka SYDA). They all are huge fans of the Hindu holy man Swami Muktananda.

Back in 2003, they also launched a restaurant in Madrid, however, it didn’t work.

Who is Ana Leza?

Ana is an actress by profession. She made her TV debut with a role in Teresa de Jesus in 1984. The same year, she appeared in a mini-series, Frangmentos de interior.

In 1998, Leza appeared in a Spanish black comedy-drama film, Women on the Verge of a Nervous Breakdown along with ex-hubby Antonio and many other known actors. She also made a cameo in De amor y sombra and Philadelphia with Antonio.

Her other on-screen credits include La mujer de tu vida, Hay que zurrar a los pobres, Of Love and Shadows, and more.

Her Mother Concha Leza was also an actress

Ana Leza was born Ana Arana Leza in Madrid, Spain. She is the daughter of the late actress María de la Concepción Leza Núñez (aka Concha Leza). She appeared in on-screen projects like Foul Play, Live in Difficult Times, and Outrage.

Leza has Spanish nationality and belongs to the Hispanic race.

What is Ana Leza Net Worth?

Her fortune is $100,000 as of 2020. On the other hand, her ex-spouse Antonio Banderas’ net worth is $50 million. He has earned the major portion of his wealth from his illustrious acting career.

Antonio kicked off his acting journey, portraying Antonio Juan in False eyelashes in 1982. He landed his first role in the US theatre playing Contini in Nine. The role in the project also brought him a nomination for a Tony Award. He played in And Starring Pancho Villa as Himself in 2004 and got a Primetime Emmy Award nomination.

Moreover, Banderas was nominated for the Academy Award and the Golden Globe Award for his breakout performance in a 2019 movie Pain and Glory.