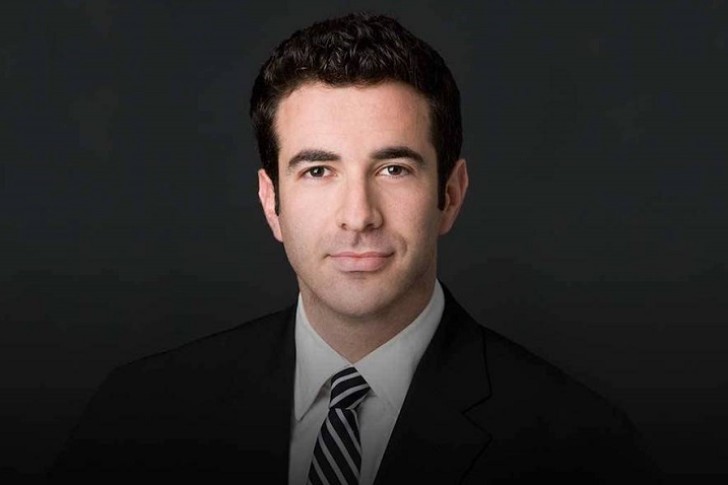 Ari Melber is a lawyer and famed Journalist, who is currently employed at NBC News as a legal analyst and MSNBC as a chief legal correspondent. The popular on-air personality gained widespread fame after hosting MSNBC‘s news and politics program, The Beat with Ari Melber.

As for his love life, Melber previously married his wife, Drew Grant. After their divorce, Ari started dating his girlfriend (When We First Met) star, Alexandra Daddario.

Let’s find out more about his professional and personal life in the article!

Who are Ari Melber’s Parents?

Melber is the son of Barbara Melber (mother) and Daniel Melber (father). His mother Barbara is a sociologist by profession who obtained her degree from the University of Chicago. She previously served as a teacher at the University of Washington and Boston University. After her long-time teaching career, Melber’s mom embarked on social work.

Talking about his father Daniel, the old man was born and raised in Israel. He is a neurologist by profession.

Furthermore, Melber’s grandfather were Holocaust survivors who fled to Jerusalem from Germany after the Nazi regime started persecuting and even killing thousands of Jews.

Ari was born on 31st March 1980, in Seattle, Wahington, United States. He is an American as per his nationality.

Melber Raised in a Family of Multi-Talented People

As the son of scholar parents, Ari grew up in a highly educated household. He also has an older brother named Jonathan Melber. He is a writer at Art/Work – Revised & Updated: Everything You Need to Know (and Do) As You Pursue Your Art Career.

Ari Melber Education: Is a ‘University of Michigan Graduate

Melber got enrolled at the University of Michigan and earned a bachelor’s degree in political science. Upon his graduation, Ari, who was destined to be an on-air personality made his way to Washington D.C and started working for Senator Maria Cantwell and later for John Kerry‘s presidential campaign.

He then attended Cornell Law School and earned a J.D. degree from the school. Meanwhile, Ari landed a job as an editor at the Cornell Journal of Law and Public Policy.

Shortly after there, Melber went on to intern at New York County Defender Services.

His Early Work As an Attorney

Following his internship, Melber began working under the known Cahill Gordon & Reindel lawyer, Floyd Abrams. His four-year association from 2009 to 2013 with Abrams played a vital role to craft his amateur journalistic skills in legal issues.

Melber also served as a political writer for many publications like The Nation, The Atlantic, Politico, and The Daily Beast.

Melber’s big break came when he was designated as a chief legal correspondent of MSNBC in April 2015. He also served as a legal analyst for NBC News.

He mainly covers the issues of the United States Department of Justice and the Supreme Court. The journalist received the Emmy Award for his Supreme Court coverage too.

‘The Beat with Ari Melber’

Melber is a host of the widely popular news and politics program, The Beat with Ari Melber on MSNBC. Premiered on 24th July 2017, The Beat is considered MSNBC‘s best-rated show ever for the time slot. In early 2021, with an average of 2.6 million viewers a night, The Beat became #1 at 6 pm in ratings, topping CNN and FOX News.

Furthermore, the show also became one of the most viewed news shows of any MSNBC show on YouTube in 2019, garnering a record-breaking 218 million clicks.

Following the immense success of the program, Melber gained tremendous positive reviews from critics. Columbia Journalism Review named him “a remarkably effective interviewer’ while a New York Times columnist states Ari is “an outstanding interviewer, among the best on television.”

The renowned media personality also worked for many other reputed programs that include The Point, The Cycle, The Rachel Maddow Show, and The Last Word with Lawrence O’Donnell.

Ari Melber is not dating anyone as of 2022. But, in the past, the media personality was in a marital relationship with his now ex-wife Drew Grant, a Collider journalist. The former flames tied the know back in 2013. Sources reported the two first came across on a public occasion in 2010 and dated for a few years before they exchanged their vows.

Both Melber and Grant were quite secretive about their married life as they never talked about their relationship publically. The two, however, parted ways after four years of marriage in 2017.

Following their divorce, Drew started dating Richard Alexander. But, her ex-husband Melber reportedly stayed single for a few months until romantically linked to ‘When We First Met‘ actress Alexandra Daddario.

His Relationship With Alexandra Daddario

Ari and Alexandra were first spotted together, enjoying their lunch date at Cuban restaurant Cafe Habana Malibu in August 2018. The two made headlines when they were caught on the camera sharing a passionate kiss in their car shortly after their lunch date.

The former couple also appeared along with comedian Richard Lewis during his 24 years of sobriety celebration on 4th August 2018.

But, later on, their relationship gradually vanished from the spotlight. Neither Melber nor his then-Gf Alexandra disclosed when the two exactly split.

Ari Melber’s estimated net worth as of 2022 stands at $4 million, as per Celebrity Net Worth. The majority of his wealth Melber has racked from his journalism career solely. He is also paid a considerable salary.

Who is Ari Melber Dating in 2022? The Truth About His Relationship With Alexandra Daddario