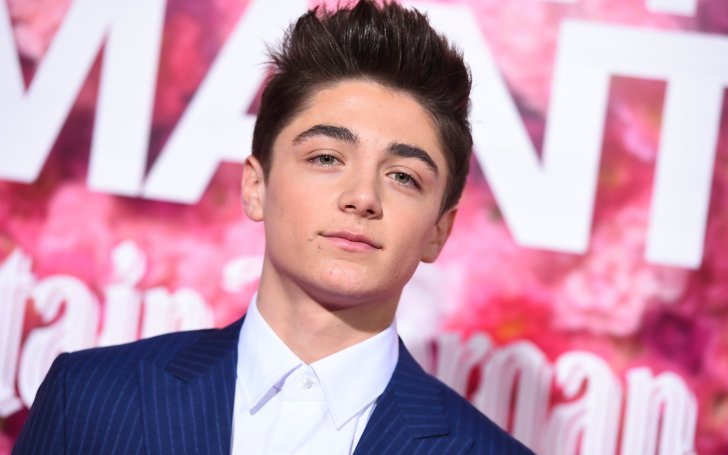 Being as famous as Asher Angel, there are no short of speculations regarding the actor’s dating life. Till now he has had several affairs. He recently dated model and social media star Annie Leblanc. However, they have already split.

And it looks like Asher has found a new girl in 2021. There are rumors that he is dating a new girlfriend Regan Sheppeard. Is that true?

Here are the details on the Shazam star’s current relationship status. Also, find out all about his past affairs as well.

Asher Angel Girlfriend 2021: He is dating!

Following the split with Annie, there are rumors Asher is dating a new girlfriend. Yes, you heard it right. The actor is dating social media influencer, Caroline Gregory. Asher first confirmed he is in a relationship with Caroline via an Insta post which he shared on 1st January 2021.

After he shared the surprising news, fans were kinda taken aback. Not a single fan had any clue about Asher’s secret love affair.

Besides, a few months before his surprise revelation, fans were thinking the actor is dating Reagan Sheppard, a model. For those who are unaware, Reagan is a model in Asher’s music video “Do U Wanna?” And it was just after the release of the music video in July that the fans started making speculation about their affair. Further, their chemistry and physical affection made fans more suspicious.

Well, fans’ suspicion rose a lot higher after Asher made a flirty remark on one of Reagan’s post on Insta. check this out:

Despite the fact that things look a little suspicious between the two. It is quite likely that the two might just be friends. Hopefully, they address the rumors if they are actually dating.

Nevertheless, now that we’ve told you about his new confirmed girlfriend, rumors of his romance with Reagan should stop.

Asher Angel Dated Annie LeBlanc In The Past

Many of you’ve already figured it out and yes you guessed it. Asher Angel was in a relationship with girlfriend Annie LeBlanc. The couple dated for over a year.

Annie is a celebrity herself who appeared in several shows and released many songs as well. In addition, she is the sister of the late actor, Caleb Logan LeBlanc. Her brother Caleb passed away due to unknown reasons in 2015.

Sparks first began to fly between the pair when Annie appeared as the love interest of Asher in his music video, Chemistry. Just like the title, their chemistry was breathtaking and fans immediately started shipping them as couples.

And much to the fans’ anticipation, Asher and Annie confirmed their romance. During his appearance at Zach Sang’s podcast on May 15th, 2019, the actor revealed he and Annie are more than ‘just friends.’ Furthermore, he also divulged the song ‘One Thought Away‘ was dedicated to his girlfriend Annie. How cute!

While admitting it, he said,

“Alright, so it’s Annie LeBlanc, to put it out there. … I actually did the ‘chemistry’ music video with her. That’s how I met her. And she’s super cool, super nice and she makes me happy. I make her happy, I guess, somehow. I don’t know how. It’s crazy. But she’s the best and she’s very supportive.”

Ever since then, the duo had been quite open about their relationship. From sharing cute PDA pictures to profess their love for one another, they truly were an inspiration for couples.

Like this video, Asher shared on the eve of Valentine’s Day!

❤️ I’m lucky to be in love with my best friend

You can tell, he is head over heels for Annie. And why wouldn’t he be! Her personality is so infectious that once you’re drawn to it, there is no going back.

Furthermore, their relationship didn’t just start on a whim. Both of them knew each other for a long time and remained BFF before taking it up a notch. And to this day, Asher and Annie are still BFFs.

Asher and Annie LeBlanc Break-Up: What is the Reason?

Just when we all thought Asher and Annie might go all the way together, the break-up news came knocking down their doors.

Yes, you read it right, our favorite couple has called it quits on 13th May 2020, after dating for a year. The big bombshell dropped after Annie shared an Instagram story revealing she has parted ways from Asher.

As we can make out from the above picture, it looks like there isn’t any bad blood between the pair, however, fans do not think so.

According to the fandom, the main culprit behind their unfortunate break-up is Asher’s mom, who, as they claim, wasn’t mature. What’s more, Asher also shared a cryptic picture on his Instagram handle, adding more fuel to the fire.

The caption reads, “You know you really love someone when you can’t hate them for breaking your heart 💔”

Honestly, the caption really makes Annie look like the main villain. One fan even wrote, “this caption is so unnecessary. makin annie look bad.”

Besides, after he shared the post, Angel is losing followers on his social media handle.

Asher might be open about his current relationship, but he never confirmed any of his past affairs. The handsome Phoenix native first got linked with Jenna Ortega back in 2018.

Rumors of their relationship started when they attended the Venom movie premiere as a couple. More to that, Asher and Jenna Ortega even wore the same dress as the former couple, Pete Davidson and Ariana Grande, further solidifying their link-up. Asher even shared a picture with Jenna on Instagram with a red heart emoji.

After Jenna, he was then linked with Peyton Elizabeth Lee. Yes, they worked in the series, Andi Mack and she even portrayed as his love interest in the show. Later on, Asher himself stated they’re just friends and close friends at that. 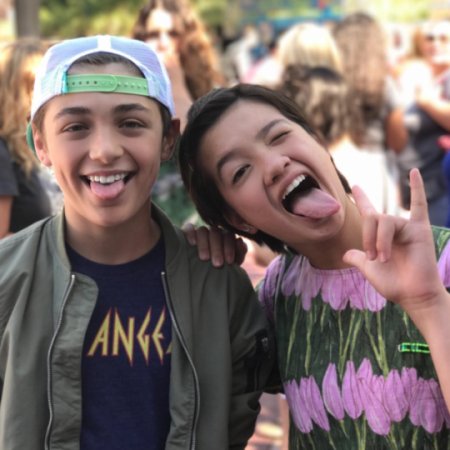 The singer was once rumored to be dating Nickelodean actress Madisyn Shipman as well.  Rumors started cooling off after Asher said he is not dating her and they are just friends.

In a sitdown with JustJared Jr., the actor mentioned the type of girl he falls for and the type he stays away for good. Girls, he likes you if you don’t gossip about anyone and stick to your business.

No space for a mean girl. To put it simply, Asher refrains from making any contact with girls like Amber from the series, Andi Mack. He ended his statement by saying, “You should be looking for someone who is nice and sweet and is very humble and thoughtful.”’