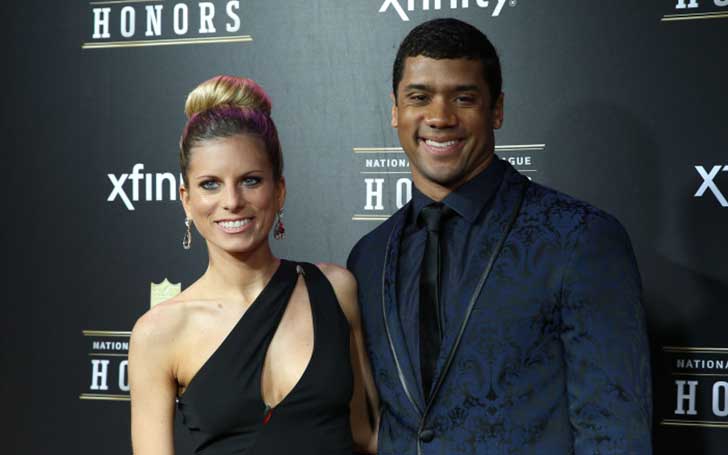 Ashton Meem is one of the few celebrity spouses who keep coming into the limelight even though they are not together with the person they are recognized for. Well, Meem is the former wife of NFL quarterback Russell Wilson. Wilson plays for Seattle Seahawks.

Meem and Wilson started their romantic relationship in the mid-2000s and went to marry in 2012. However, just a couple of years later, they arrived at a situation from where they couldn’t continue as husband and wife. In spite of her divorce, Ashton prefers to go with her ex-hubby’s last name.

Well, why did Ashton and Wilson separate in the first place? Did someone come in between their marriage? Let’s find every detail about Meem’s failed marriage with Wilson. Let’s also dig up some information about her before she rose to the limelight.

Ashton Meem And Her Ex-Husband Russell Met During High School

Ashton has not talked candidly about her relationship with her ex-husband Russell. However, in a conversation with Richmond.com, she revealed that the ex-pair first came across during their high school days.

She also revealed that after their initial meeting, they went on to meet again at a summer party. After that, they started dating officially. The former couple kept their romance going even after Ashton’s moving to the University of Georgia.

After years of romance, Ashton Meem and her beau Russell got married on January 14, 2012, at the Country Club of Virginia. The bride and bridegroom had hosted a reception for around 300 guests on their big day. As per the reports, Ashton planned her own wedding.

Ashton emerged in a stunning gown by J. Crew Bridal in NYC as nine groomsmen and nine bridesmaids lined up at St. Stephen’s Episcopal Church. At the time, Ashton said they had kept their honeymoon plan on hold as Russell was training at the IMG Academy in Florida for the NFL draft.

Just two years after Ashton and Wilson exchanged vows, their married life hit the rock. In April 2014, the NFL quarterback announced he and his then-wife were ending their marriage. He announced the big news in a statement via The Seattle Times. The statement read as:

” I have made the difficult decision to file for divorce. Clearly, decisions like these don’t come easy. Ashton and I respectfully ask for prayers, understanding, and privacy during this difficult time. Moving forward, I will have no further comment on this personal matter.”

Following the announcement, rumors started to swirl about Meem cheating on Russell with his former-teammate Golden Tate. The rumor was circulated all over the media that Meem and Tate were compelled to open their mouth on the matter. Both of them denied their affair rumors.

In the meantime, Tate shut down the rumors via The Cauldron. “I didn’t have an affair with Russell Wilson’s wife, not did I have anything to do with his divorce,” wrote Tate. He continued:

“That is laughable for anyone who knows us…Russell and I were good friends when I was in Seattle, on and off the field-he knows the rumors about me were unfounded, damaging to my reputation, and an attack on my character.”

Tate ended his statement by saying, “Anyone who circulated that rumor was just plain irresponsible.”

Did She Remarry After Divorce?

Ashton Meem has been staying away from the media limelight ever since her divorce from Russell Wilson in 2014. Even though she has been active on social media sites like Facebook, Instagram, and Twitter, she doesn’t give insights into her love life in her posts.

However, many online tabloids claim that she hasn’t remarried.

On the other side, her ex-spouse, Wilson is happily married with children. Wilson started dating his now-wife, Ciara shortly after his divorce from his first wife. And they made their first public appearance as a couple at the 2015 White House State Dinner for Japan.

A year later, the power couple got engaged on March 11, 2016, during their vacation to Seychelles. And just months after, on July 6, they walked down the aisle at Peckforton Castle in Cheshire, England. Less than a year after they said “I do,” they welcomed their first child, a daughter Sienna Princess Wilson, on April 29, 2017.

Three years later on July 23, 2020, Wilson and Ciara gave birth to their second child, a son, Win Harrison Wilson. As a matter of fact, Russell and Ashton Meem don’t share any kids together.

Who Are Ashton Meem’s Parents?

Meem was born to parents Lang Meem and Molly Meem on September 6, 1987. Born and raised in Richmon, Virginia, Meem attended St. Catherine High School. It was around the same time when she met her future husband Wilson in 2006. At the time, Wilson was going to Collegiate School a few miles away from her school.

Besides, there’s not much info about Ashton’s early life and siblings.

What Does Ashton Meem Do For A Living?

Many of you might be wondering what is Ashton doing nowadays. Since her divorce from Russell, she has rarely made any public appearances. So it is obvious that people want to know about her current status. As per her LinkedIn, she currently lives in Raleigh, North Carolina.

As for what she does for a living, she is an advertising operations assistant at American Family Insurance. Meem has been working there since August 2011. Besides, she also works as an account executive at Morton Consulting LLC based in Virginia.

What is her Net Worth?

There is no info on the spousal support she received as part of her divorce settlement from Russell. However, considering the NFL quarterback’s earnings at the time of his divorce, we can presume Meem got a good sum.

She is a Dog Person

Ashton Meem has always been a dog person. Even though her life at present is out of media reach, her love for dogs can be seen on previous social media posts. In her past posts, she can be seen enjoying most of her free time with her dogs.

Like any other celebrity spouse, Meem also indulges in being on social media. She is an active user of Instagram and Twitter where she has thousands of followers as of 2021. At present, she has more than 18k followers on Instagram and more than 6k on Twitter. However, she hasn’t updated any posts on Instagram since May 2017.

While her Instagram is public, she has set her Twitter account private. She often shared her moments with her ex-husband Russell while they were still together. However, after her divorce, she hasn’t shared anything about her romantic life.

A Photo Of Ashton Went Viral on Twitter In April 2022

Back on 28 April 2022, Ashton become the talk of the town after NFL shared a photo of her along with her former husband on Twitter. The post showed a photo of them from the days they were dating, which was captioned as,

In honor of the NFL Draft, may we never forget the night when Russell Wilson’s ex-wife thought she was set for life.

Within a few minutes, the post went viral, and Twitterati started mocking and cracking jokes about their relationship at the time.