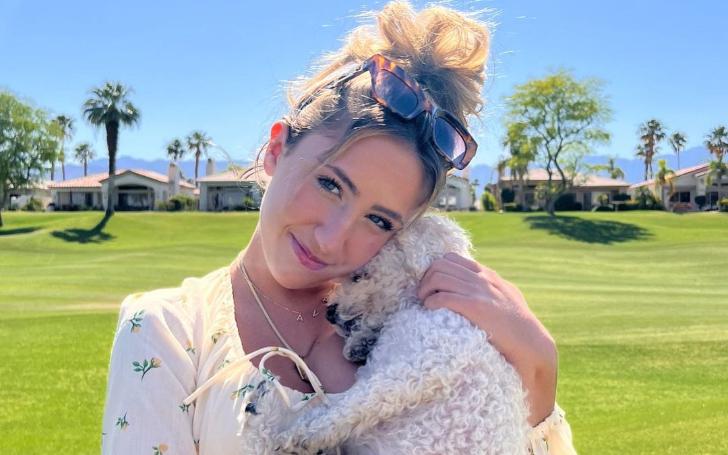 Ava Kolker is an American actress who first rose to prominence as a child artist in the 2013 comedy horror series Scary Movie and the 2014 popular series Girl Meets World. Further, she performed the role of Princess Jasmine in the musical dram Alladin and Corny Collins in the movie, Hairspray which helped her to authenticate herself as a versatile actress.

Besides acting, she is also a singer and has sung more than 5 songs till 2022. Likewise, Ava is also a social media star. Despite all her professionalism, how is Ava Kolker in her personal life? What is she doing in 2022? Is she dating someone?

In this article, we are going to explore everything about the actress, singer, and social media star, Ava Kolker along with her age, family, siblings, career, net worth, and much more.

Ava Kolker Is A California Native

A Californian native, Ava (aka Ava Grace Kolker) was born to her mother Sandrine Kolker, and her father Doug Kolker on the 5th of December 2006 in Tarzana, Los Angeles, USA. As of August 2022, she is 15 years of age and has a birth sign Sagittarius.

When Ava was 1 year old, her family moved to Florida where she spent most of her early days and grew up alongside her two older sisters Kayla Kolker, and Jade Kolker, and a younger one Lexy Kolker.

Talking about her ethnicity, she belongs to mixed ethnic background and is American by nationality.

Ava’s eldest sister Kayle was born on July 14, 1998, in California. By 2022, she is already 24 years of age. She is a social media influencer and actress by profession. Kayla was seen as an actress in the TV series, Victorious 2010 where she portrayed the character Milly Mooney. Likewise, Ava’s other sister Jade is an Instagram star, born on September 15, 2001. Jade is 20 years as of now.

Further, her younger sister, Lexi was born Alexa Rose Kolker on August 17, 2009, which makes her 13 years of age as of 2022. The youngest of the Kolker brood has already acted on several projects like Shooter, Searcher, A little Mermaid, and many more, as a supporting as well as the lead actor. Among many, Lexi’s portrayal of the character Chloe in the 2018 horror movie, Freaks was most appreciated.

At a very young age, Kolker started acting in the American entertainment industry. She began her professional career as an actress with a guest appearance on the TV series American Horror Story in 2011. Later, after a year, she did her first film in the comedy genre Golden Winter, in which Ava played the character Marybeth Gietzen.

Likewise, she did films like Scary Movie which was commercially successful, The Trials of Cate McCall, and Meadows in the earlier years of her career. Her ability to do versatile roles made her more famous among the audience and film fraternity.

After every performance, her popularity increased, and as a result, the Scary Movie actress worked on various projects and played in numerous TV series and movies. Additionally, Ava Kolker also did a voice role for Wooden Bear Cub in the 2019 movie, Red Shoes and the Seven Dwarfs.

Talking about her TV series, from the year 2011 to 2022, she had done eleven TV series in total. She began acting in the TV show, American Horror Story. Subsequently, she appeared in the episode “The Glitch That Stole Christmas” of the series Dads.

Further, she played Romy in Sam & Cat, an American teen sitcom in the episode, MagicATM. Similarly, she played in TV shows like Blak-ish, Girl Meets World, Agents of S.H.I.E.L.D, How I Met Your Father, Sydney to the Max, and many more.

Moving to her movies, Ava appeared as Heather in Miss Meadows, Augie in The Trials of Cate McCall, and Lily In Scary Movie 5. Her other movies’ credits include Message from the king, The Axe Murders of Villisca, A Fairy’s Game, and Sister Cities. For her incredible acting in Girl Meets World, she was given the Young Entertainer Award in the year 2016.

Ava Is A Singer As Well

Besides her acting career, she is also a singer and has sung around six songs till today. She basically sings songs from artists like Ariana Grande and Billie Eilish.

She, from a very early age, was interested in music. Some of her songs are titled The Good Ones, Eventually, What It Will Be, Seventeen, and others. If you want to hear her songs, you can do so by visiting her YouTube channel.

Ava Kolker’s Personal Life: Is she Dating someone in 2022?

Going through her social media account, Ava does not seem to be in any romantic affairs, and neither there are any rumors regarding her having a boyfriend. Ava is just 15 years old and is fully enjoying her single life along with her family and friends.

Likewise, she is doing more and more projects as an actress and appears to be fully focused on making herself successful in her career. So, it is safe to say that the Girl Meets World actress is single with no past love affairs.

Ava Kolker Is an Animal Lover

The California-born actress, Ava is talented, bold, and beautiful. Alongside all these qualities, she has one more and most precious quality that every human must have i.e. love and respect for every living being in the world. Ava loves animals and makes time to protect and preserve them.

She is active in Marine life Rescue along with other team members. Further, the actress is also connected with the organization that works for animals. Regarding this, she even mentioned the name of the organization on her Instagram account so that people can join hands to do charity for animal protection and preservation.

She wrote, “If you love animals like me, you will be touched by this amazing organization i was just introduced to. Animal Love Rescue Center Costa Rica is a non-profit, no-kill charitable organization founded on the belief that all animals deserve respect, love and protection.”

In 2022, she is going to be seen in her new project, ‘Just Like You – Food Allergies.’ On June 6, 2022, she announced her upcoming work in which Ava is reteaming with Girl Meets World co-actor August Maturo. In her announcement, she wrote

“We are so excited to announce our new project. We are producing and starring in this film together and our hope is that this film will save lives and create a kinder world for people who live with food allergies.”

Is Ava Kolker on Instagram? Her Other Social Networking Sites

She is highly active on Instagram under the username @avakolker with 1 million followers and 1,711 posts in total. Further, Kolker is also on Facebook with 2.7k likes. The beautiful actress has opened her account on Twitter under the username @RealAvaKolker where she introduced herself as Olive on @disneychannel’s Sydney to the Max and Ava on Girl Meets World. She has 15k followers on Twitter with 1,276 tweets in total.

Similarly, Ava is also a TikTok star with 4.1 million followers on her TikTok account. Moreover, she has her own Youtube channel with 44.7k subscribers where she keeps uploading her music video.

Though Ava is in her teenage years, she has already made a career in acting and music. She has been acting for more than 10 years and is a social media influencer. So, without any doubt, we can say that she is making a lot of money for a long time. Hence, she has a net worth of $550,000 as per reports.