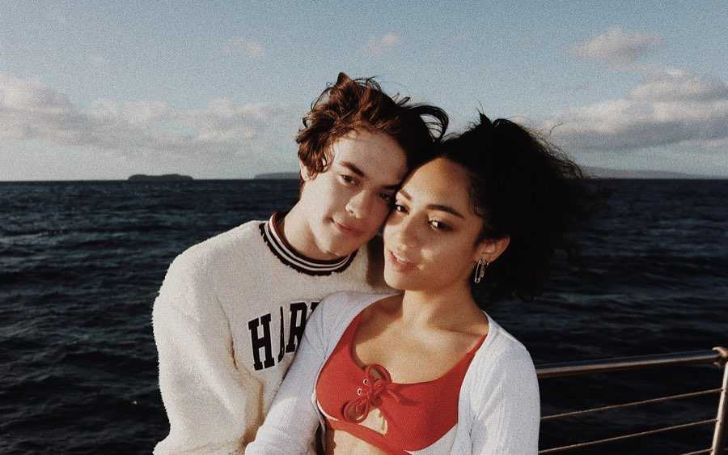 New Couple in the town!

TikTok star Avani Greg has a man in her life. Her boyfriend Anthony Reeves, aka. Luvanthony, is also a social media influencer. There are reports that Avani and Anthony coupled at the Hype House, a collective TikTok group, and are dating ever since. But with the outbreak of Coronavirus, the pair seem to be maintaining a proper distance.

Well, here we are going to explore all about Avani and her boyfriend Anthony’s relationship. How long have they been dating? Where did they meet?

Get all your answers here.

As reported above, Avani Greg and Anthony have been together for a while. The rumors of their affair began after they were seen together getting cozy at Tyler, the Creator’s Camp Flog Gnaw Carnival.

Moreover, the pair fueled their romance rumor with an Instagram post on January 3, 2020, when Anthony referred to her as “bebe” in a post under the “#baewatch.”

Not long after, the 17 years old Avani too made a beautiful remark, “MY HEART; SO HAPPY,” on one of the posts by Anthony. They remained close for months before they started dating officially. Even though Avani and Anthony’s social media posts suggest they had already been dating in January 2020, the couple actually started dating in March 2020.


Well, the duo has been all over each other on social media ever since. But recently, with the outbreak of the coronavirus, the two remained separate for a while.


Completed Five Months Together in August

Even though Avani and Anthony have been quite expressive of their love on social media, the pair had not revealed it when they started dating. But on August 7, both Avani and her boyfriend took to Instagram to mark their five months anniversary.

“five months with beb <3333 happy days happy days :)” wrote Avani in the caption of her post.

Their Life Amid Coronavirus Outbreak

Amid the coronavirus outbreak, Avani and her boyfriend maintained proper distance as regulated by the government.

In fact, the high schooler could not stop herself from expressing her love towards Luvanthony and how much she missed him during the quarantine.

In one of her posts, she wrote,

hi ant if ur seeing this i just wanted to say that i can’t wait to see u again whenever this quarantine thing is over. really miss you

Anthony soon responded to the post saying, “bby i miss you lots.”

People are just waiting for people to post. They’re just staring at their phones all day and just waiting,” she explained, adding that engagement on her social media platforms has gone up nearly 25% amid the coronavirus pandemic.

She also stated that she had been able to experiment with contents during the quarantine. She said,

“Everyone’s bored and on their phones so it’s a good time to see what kind of content you can put out,”

Avani Gregg Boyfriend Is Not a Hype House Member

Unlike Avani, her boyfriend Luvanthony is not a Hype House member but rather belongs to TikTok collab Sway House located at a Bel-Air mansion where six people live together free of cost.

But since the coronavirus outbreak, the Sway House mansion is in quarantine but the members are maintaining proper distance from each other.

As for a fact, Avani has 20.2 million followers on her TikTok a lot ahead of famous TikTok star Woah Vicky. Just for a fact, several other social media star like Alex Warren, Addison Rae has been the part of The Hype House.