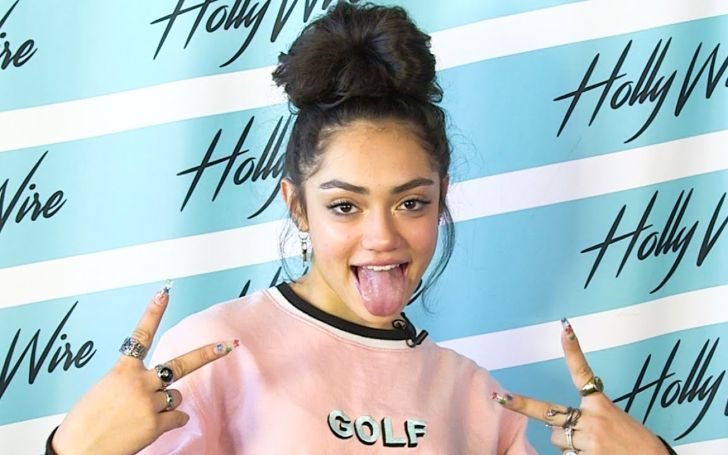 Here, let’s talk about her career, parents, relationship with Anthony, and all other details about her life.

Who is Avani Gregg?

Avani Gregg is a social media influencer from the United States. As mentioned above, she was born on November 23, 2002, in Indiana, United States.

Apart from being a social media influencer, she is also a gymnast who has been staying away from gymnastics after suffering back injury.

Avani shares a strong bond with her parents and sisters. Her father is an American by nationality but comes from an African-American ethnic background. Similarly, her mother Anisha Gregg is of Indian ethnicity.

She is also pretty close to her sisters, Priya Gregg and Shanti Gregg. As of 2020, she along with her family lives together in Indiana.

How Tall is Avani Gregg?

Avani is one of the most successful social media influencers. She started out on musical.ly and Instagram in 2017, when she was merely 14.

While her musical.ly initially featured lip sync videos, her Instagram uploads were mainly makeup tutorials and related photos. Her success took a hike with the launch of TikTok where she focused on clown and cosplay makeup.

Although Avani is a phenomenon of TikTok and Instagram, she had no intention to opt for social media influencing her career.

In some of her interviews, she has clearly mentioned that she started posting on social media because she enjoyed it. She stated, “I like to post on social media. I find that really fun.” Gregg went on to say that she likes to do her makeup and talking to people.

Her Makeup Videos Propelled Her To Success

As for a fact, TikTok star Avani was into makeup even before she gained fame. By the time, she got into social media, she was already a good makeup artist.

Not to mention, her perfection as a makeup artist became the reason for her success.

Her unique approach to her videos that include clown and cosplay makeup is what propelled her to fame.

Because of her video contents, she was even nominated in the TikTok category for the 12th annual Shorty Awards. Her profile as explained on the Shorty award site reads as follows:

“Launching to TikTok fame via her trademark 2019 #ClownCheck videos, Avani’s dual combination of makeup skills and moody skits propelled her to viral celebrity, earning 3M followers in just a couple of weeks. With contagious energy and the ability to perform impressive gymnastics stunts, Avani has become a coveted collaborator…”

Avani Is Also A Gymnast

17 years old Avani is a trained gymnast. She started as a gymnast at 4 and made it to level 9. However, after a back injury, she had to quit gymnastics.

Despite the injury, she still occasionally performs gymnastics in her TikTok videos.

In one of her videos, she talked about her injury and said,

“I am a retired gymnast. I was level nine when I had to quit because my back… that’s a different story.”

She Is an Actor

Besides being a social media influencer and a Gymnast, Avani Gregg is also an actor. In 2020, she will appear in the Brat TV series Chicken Girls.

Reportedly, she will play the character Gemma in the upcoming series.

Avani and Anthony Reeves are dating for a few months now. They sparked their relationship rumor in early 2020 after both of them started sharing their intimate pictures on social media.


On January 20, Avani shared a photo of her and her boyfriend from their trip to Hawaii. However, they didn’t confirm their relationship by then.

Seeing their growing intimacy, many online tabloids speculated them to be dating since the starting of the year, however, they appear to have started dating only in March 2020. It is because both Avani and her beau shared their photos on Instagram on August 7 saying they have been together for five months. Here is Avani’s post.

As of 2020, they often appear together on their Instagram and also their TikTok videos. Her boyfriend reportedly is a TikTok collab Sway House member in the Bel-Air mansion.

What Is Avani Gregg Net Worth?

As of 2021, she has a net worth of $20 million. She makes most of her money from sponsorships and ad revenue. Further, she has endorsed brands like NYX Cosmetics and has tie-ups with numerous other brands. Further, she also sells her own merchandise that includes T-shirts, hoodies, phone cases, and much more.