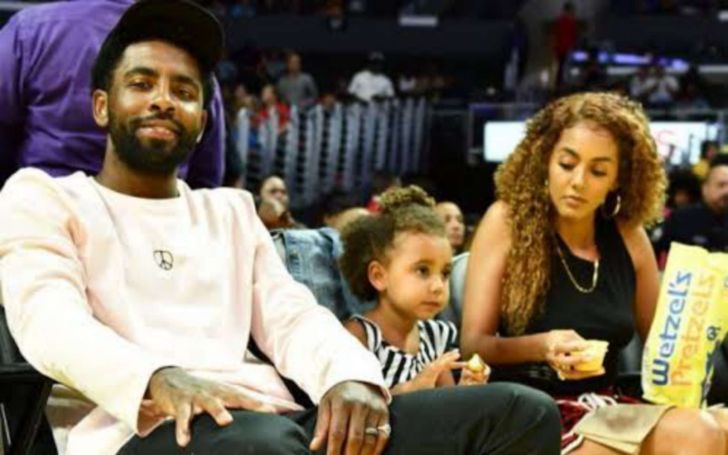 Azurie Elizabeth Irving is the daughter of a professional American basketball player and Brooklyn Nets point guard Kyrie Irving. Her father was named Rookie of the Year and was the overall pick in the 2011 NBA draft. Since then he has won multiple awards and games including NBA All-Star Game MVP, USA Basketball Male Athlete of the Year, and NBA Three-Point Contest champion.

Despite being a celebrity kid Elizabeth’s parents are doing their best to keep her away from the limelight. However, many curious minds are looking for information about her early life, age, siblings, and more. Similarly, people also want to know who her mother is. How is her parent’s relationship? Are they still together?

Hence, if you are also one of the curious minds, you have come to the right place because today we are going to learn everything about Azurie Elizabeth Irving, daughter of Kyrie Irving.

Azurie Elizabeth Irving was born on November 23rd, 2015 in Dallas, Texas, USA to Kyrie Irving and Andrea Wilson. She is 7 years old as of 2023 and her zodiac sign is Sagittarius.

The Meaning Behind Her Name

Elizabeth was born after 35 hours of labor. Two days after her birth, her father, the Brooklyn Nets point guard Kyrie Irving, shared a heartfelt Instagram post expressing his love for his daughter and revealing that he named her after his mother Elizabeth who unfortunately died when he was 4 years old. The post further reads,

“Azurie Elizabeth Irving 11/23/15 35 hours of labor from her great mother and she came into the world to bring a shine to my world that I never thought was possible. I love you so much, and my heart grew the first time I felt your heart against mine.
Mommy, I gave her your name because I know you will bless her and our family the same way you blessed me. I love you.”

Andrea Wilson is an American model and the winner of Miss Texas USA 2010. She was born on February 8, 1986, in Dallas Texas, USA. Wilson was born to Arthur Franklin and Verna Wilson. The model has two siblings Lindsay Wilson and Anthony Wilson. However, she is best known for being the ex-girlfriend of Kyrie Irving.

Kyrie Andrew Irving started his NBA career by joining the Cleveland Cavaliers. He was with the team from 2011 to 2017 and during that time, Irving was named to the 2012 Rising Star Challenge where he scored 34 points against Team Charles Barkley, was crowned MVP, and won the 2012 NBA Rookie of the Year Award. Likewise, in 2013 he was selected in his first All-Star game where he scored 15 points, four assists, and three rebounds.

In 2016, Azurie’s dad made the game-winning three-pointer against the Golden State Warriors. He later requested a trade-off with the Boston Celtics. Kyrie played for Boston for two consecutive years and eventually moved to Brooklyn Nets. Irving was elected to be vice president of the National Basketball Players Association in Feb 2020,

Apart from his basketball career, Kyrie has also starred in a couple of movies including Kickin’ It (2012), and has done voice-over in We Bare Bears (2016), and Family Guy (2018). He has also written, directed, and acted in multiple advertisements appearing as Uncle Drew, which became a feature movie in 2018.

Azurie Elizabeth Irving’s Parents Were Together For Two Years: Their Love Story

According to multiple sources, Kyrie and Andrea first met somewhere in 2012 but didn’t start dating until July 2013. The duo was having a blast in their relationship and Wilson even became pregnant with Azurie.

However, their relationship didn’t go well, and the duo decided to walk their separate ways. The then-boyfriend and girlfriend officially separated in April 2015 seven months before the birth of Azurie Elizabeth Irving.

In August 2015, the 2010 Miss Texas, Andrea Wilson told TMZ that Kyrie left her on the ice after impregnating her with their daughter. According to her she has had no connection with him and the then-Cleveland Cavaliers star didn’t do anything to support her in that delicate moment.

“I’ve paid for and handled everything on my own without ANY support from him. I have no connection with him nor do I seek any connection to him.”

However, Kyrie denied those allegations saying that it’s total BS. He even filed legal docs requesting a paternity test to prove that he is the father of their child and wants to step up and provide full support, saying he wants to be an involved dad.

Irving also released a statement saying he will be covering all of the expenses for the child however, there is a catch where the soon-to-be mother should raise their child in Texas. Likewise, the athlete’s lawyer issued a statement to TMZ Sport saying,

“In filing this petition, Kyrie is doing the right thing, taking responsibility and actively seeking to establish his rights so that he can be involved the day he becomes a father from the outset.”

But, Wilson thinks otherwise saying that he was doing all this to look good in front of the media.

All’s well that ends well, Azurie’s parents have been keeping an amicable relationship and are co-parenting their child. Likewise, Kyrie pays  $4500 monthly as child support.

Are Azurie Parents In A New Relationship? She has a half-sibling

After the split, the 2010 Miss Texas, Andrea Wilson has been staying away from all of the media outlets There isn’t much information available regarding Azurie’s mother so, it is pretty difficult for us to determine whether she is in a new relationship or not.

On the contrary Azurie’s father has been in multiple relationships after the split. Kyrie dated singer Kehlani Parrish in 2016. Later he dated a model named Gabrielle Lexa for about 6 months.

Azurie Elizabeth Irving’s Life Style; Her Dad Is A Millionaire

With all of the money and fame behind her back, it is no surprise that the seven-year-old is living the life of her dreams. Her father Kyrie Irving is a millionaire with an estimated fortune of $90 million. He earns his money from his career as a basketball player and also from multiple deals and endorsements.

Penelope Athena Richmond: Everything To Know About Tina Fey’s Daughter