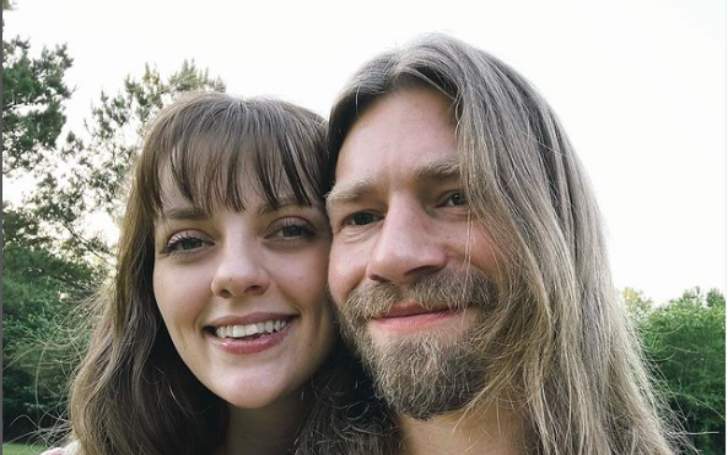 Bear Brown is a famous American television personality who is known as one of the stars of the reality TV show named Alaskan Bush People. The self-claimed “king of extreme” is one of the viewer’s favorite members out of his seven siblings featured in his family reality TV show.

The show was able to win the hearts of people because of its unique content. The show had multiple seasons throughout its run. However, Bear and his family got into many controversies due to the show. Furthermore, Bear himself was arrested for a domestic violence case. His wife filed the case after a short time of togetherness. But going through their social media handle, the couple seems to be together to date.

Fans are really curious to know the fact behind the incident. Was Bear Violent to his wife? If yes, why are they still together? Well, this article is everything you are searching for. Stick with us till the end to find out some other interesting facts about Bear Brown including his personal life, Scandals, and many more!

Bear Brown Was Born in The Wilderness of Alaska

Bear Brown aka Solomon Isaiah Freedom Brown was born to his father Billy Brown and Mother Ami Brown. His parents moved to Alaska leaving all the lavish lifestyle to spend their lives in the wilderness. He was born on June 10, 1987, and is currently 35 years old as of 2022.

Furthermore, Brown never had a formal education through any institutions. He was raised by his parents in a remote area and they gave him homeschooling. All thanks to his parents, he got different skills and abilities like hunting, protecting themself from wild animals, and surviving in extreme conditions from a small age.

Bear Brown was raised with his 6 other siblings. He has four brothers and two sisters. His eldest brother named Matthew Brown was born on September 7, 1982. Their mother was only 18 years old at the time of his oldest siblings’ birth.

After three years Bear’s second brother Joshua Brown was born on September 18, 1984. After that, his other siblings were born in Alaska. He has four other siblings named Noah Brown, Gabriel Brown, Snowbird Brown, and Rain Brown.

Talking further, he also has two other half-siblings from his father’s previous marriage. His half-sisters named Twila and Byars have also appeared in the show in an episode of Alaskan Bush People.

Bear brown fist appeared on television through the family reality show named Alaskan Bush People. It all started when his father Billy wanted to get away from the regular life and wanted to spend the rest of his life in the wilderness doing adventurous activities. Bear’s father left his job as a plumber and took his family to a remote area in Alaska.

The Brown family’s fate changed after the Disney Channel decided to make a reality show featuring people living in Alaska. Out of all the families, the Discovery channel chose the family, and that’s how they started the reality TV show named, Alaskan Bush People. After, the show was released on television on May 6, 2014, and has able to gain mass popularity. The show has released many seasons to date.

The family got into fame overnight after the show was hit. It was able to gather a mass audience because of its unique content. In the process, Bear Brown aka Solomon created a special place in the viewer’s heart being one of the extremists in the family.

Unlike most of his family members, he is quite active on his social media handle which is why he has been able to gain more attention than the rest of his family.

The long-time lovebirds, Raiven and Bear finally tied the knot on January 16 of 2022. The couple first announced their engagement in 2019. But, there was a lot of news of their break-ups in between. However, the couple was finally able to make it to their wedding with their one-and-a-half-year-old son.

The couple had an intimate wedding with their family members only. Both the couple expressed that they were grateful for the bond they share. Bear added,

“She is the most beautiful woman I’ve ever seen and still takes my breath away! I only wish Da had been there, but I know he was watching from the best seat!

Although everything seemed perfect at the wedding many fans disliked the absence of his older brother Matt at his nuptials. Previously, Matt had a huge argument with his father due to which he kept himself away from his family. But the viewers wanted him at Bear’s wedding as the family was known for their unity.

How Did Bear First Meet his wife?

The TV stars met each other for the first time at Bear’s brother’s wedding in 2018. Raiven’s mother Kassidy was hired as a wedding photographer for Noah Brown’s wedding ceremony. At that time, Raiven was assisting her mother and that was the moment when they felt an instant connection.

The couple soon started dating each other and announced their engagement in 2019. Sadly, the couple announced that they aren’t together anymore just after two weeks of their togetherness.

Bear and Raiven Were Not Together While Welcoming Their First Child

Solomon aka Bear’s wife welcomed their first child named River Brown on March 9, 2020. She had a premature delivery. Bear and Raiven were not married when they welcome their son. Moreover, the couple was having major disputes while welcoming their first child. ‘

It was only after 6-months that Bear met his son for the first time. The duo was on the verge of parting their ways as Raiven accused Bear of having abusive behavior towards her.

As per Raiven’s social media post, Bear was avoiding the news about his son. She even tried to contact the Brown family a lot of times but there was no response. He also shared some proof on her social media explaining the situation.

She later disclosed that Bear wanted the custody of her child only as a public stunt. Following that,  Raiven filed for sole custody while her partner filed for joint custody. He also provided DNA test results to the court to prove himself as the father of his son River.

Brown expressed on his social media that he wanted to establish himself as the father of his kid. He said,

“Hello everyone! There is something I would like to say! 1. It was two days after River was born before anyone told me! 2. I am not trying to un-establish myself as River’s dad, I am trying to establish myself AS his dad so that I will have equal rights as a parent!”

The couple somehow managed to solve their dispute as Raiven decided to give him a second chance. The duo is expecting another baby in 2022. She announced her due date 02/03/2023 on her social handle.

Bear Brown’s wife filed a case against him while she was pregnant with his baby. On February 2020, she claimed Bear was erratic and abusive towards her. She accused him of yelling and slamming things and preventing her from leaving rooms.

Meanwhile, Raiven further said that he started to threaten to kick her out and withhold food and money after she revealed his drug intake.

Similarly, Raiven’s mother disclosed that her daughter is going through mental abuse. As mentioned earlier, Raiven had a pre-mature delivery at the time of giving birth to her son River and according to Raiven’s mother, it was due to the hyperstress caused by Bear.

Talking further about their case, the couple discussed it for quite a long time. Later, they ended their argument after concluding that both of them are equally necessary for parenting their child.

Bear’s Wife Raiven Reveals That The Show is Fake

While having major disputes with her husband Bear, Raiven revealed that the show Alaskan Bush People is completely fake. As per one of the articles from The sun, Raiven disclosed on her Instagram live about show. She added,

Raiven exposed that the family doesn’t live in the mountains as they present in their show. She said that when she first met the Brown family she was invited to a hotel. They all hung out in the hotel and the family would go to the forest and mountain to film. She further claimed that the siblings had no good bond as they show in the series except for Rain and Snow.

Bear’s wife also added that she didn’t want her child to be a part of the family which is completely fake. She also stated,

“I’m tired of me and my son being used for publicity. I have not been informed that Bear is coming to see River.

Although the Discovery channel did not react immediately to the claim, other news articles tried to feature the incident. As mentioned earlier, when natives were asked about the family, they too agreed with Raiven and said that the Brown family would live in a hotel near the mountain and not in the wilderness, as depicted in the show.

Are Bear and Raiven Still Together?

After having a number of conflicts in their relationship, many fans thought that this was the end of their relationship. However, they gave a complete shock to their followers after announcing their marriage. Although it was quite confusing for everyone, the couple mutually decided to give themselves another chance.

The couple late sorted out their issue and decided to look after their children together as both of them felt that both parents are equally important to their child.

They tied the knot in 2019 and are still together in their marital relationship. We can see the couple sharing many pictures. Furthermore, the couple is expecting another baby on the way.

In 2016, Bear’s mother, Ami Brown was diagnosed with cancer. After that, the Brown family moved from Alaska to Washington to provide a better health facility for his mother. Although their mother recovered from cancer, the family had to go through a huge loss after Bear’s father Billy Brown’s demise. He passed away due to a fatal seizure.

After his father’s passing, the family is not as united as before. But, they are currently living in the same state. Bear is living in Washington with his wife and children. He is involved in photography and often posts his photography skills on his social media handle.

Ami Brown’s son has been able to gather a good amount of fortune through his family’s reality TV show, Alaskan Bush People. The family has been able to amass all together $60 million through their show. Bear has an estimated net worth of $6 million.

The Shocking Truth about Barbara Gail Martin, Dean Martin’s Daughter; Who is her mother?