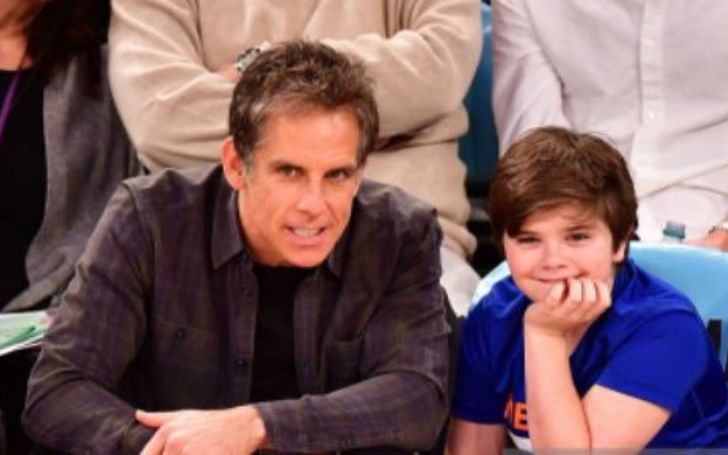 Quinlin Dempsey Stiller is an actor known for films like Megamind, Madagascar: Escape 2 Africa, Night at the Museum, and others. He though is better recognized as the child of actor Ben Stiller and his wife, Christine Taylor.

Quinlin’s father, Stiller has starred in, written, directed, or produced more than 50 films, including the “Meet the Parents” trilogy, the film, Tropic Thunder, and more. Christine, on the other hand, famously played Bonnie, Rachel’s nemesis in the battle for Ross in NBC’s Friends.

She has also starred in Dodgeball, The Wedding Singer, and My Name Is Earl. Ben, and Taylor’s one of the two children, Quinlin is now flying through his teenage years. And actor-father Stiller calls fatherhood ‘pure love and good things.’ While Quinlin is still a teen, he already has a bit of experience in the family business; first appearing in Madagascar 2 when he was just a toddler.

In the meantime, Ben and Christine’s youngest child is growing up to look more like his famous father every day. Considering he’s just a teen, time will tell if he decides to pursue a career in entertainment full time. For now, get a hold of Quinlin’s life as the celebrity child, some headlines worthy moments of him and his father, Ben, his emerging teenage years, and whatsoever.

Quinlin Dempsey Was Born In Los Angeles; His Grandparents, Ancestry,…

Quinlin, the second child of the Tropic Thunder actor, Ben Stiller was born on July 10, 2005, in Los Angeles, California, weighed in at 8 pounds, 2 ounces. The now 16 years teenager is the grandson of Jerry Stiller and Anne Meara.

His paternal side comes from a show business family, which includes his actress grandmother Anne Meara and grandfather Jerry Stiller, of US television shows including Seinfeld and King of Queens.

Dempsey’s maternal grandmother, Joan Taylor is a homemaker, and his granddad from his mom’s side, Albert E. Taylor III is the owner of a security company. Paternally, Quinlin is Jewish and Irish Catholic.

His family celebrates both Christmas and the Jewish holiday Hanukkah together. Stiller and his wife, Kristine debuted their son, Quinlin to the public in Oct 2006.

The media got a chance to capture him along with his father, mother, and sister, Ella at Camp Ronald McDonald for Kids 14th Annual Family Halloween Carnival at Universal Studios in Los Angeles.

Both of Quinlin’s parents are accomplished performers in the comedy space. They worked together on several comedies including Dodgeball, Zoolander, Madagascar, Tropic Thunder, and Arrested Development.

Stiller and Taylor though first met each other on the set of Heat, Vision, and Jack in 1999.

It was a pilot for the Fox television network’s series, called Heat Vision and Jack. The show however never received its premiere date. Talking about the first time he saw Christine, the Tropic Thunder actor with Parade magazine in 2016 said,

After that, they started hanging out with each other and according to Stiller, it developed into,

Ben in another interview said his and Christine’s relationship was a gradual thing that happened over a quick period of seven or eight months.

Stiller proposed to Taylor while in rehearsals for Meet the Parents in November 1999. The following year, on May 13, 2000, Quinlin’s folks, Ben and Christine had their wedding on an island in Kauai, Hawaii.

After marriage, the actor couple welcomed two children, Ella Olivia Stiller and Quinlin Dempsey Stiller. Quinlin’s parents, however, would announce their split seventeen years after their wedding in 2017.

Stiller and Taylor would take the news on the internet on May 25, 2017. The parents of the two revealed their plans to split with the message that read:

“With tremendous love and respect for each other and the 18 years we spent together as a couple, we have made the decision to separate. Our priority will continue to be raising our children as devoted parents and the closest of friends. We kindly ask that the media respect our privacy at this time.”

Many in Hollywood took it as a surprise when the couple revealed their breakup because they did everything together; from starring in the same movies to trying new diet fads.

Why Did Quinlin Dempsey Stiller Parents Split Up?

A source told PEOPLE at the time that Stiller’s hectic work schedule was one of the main reasons. According to insiders, the couple struggled to balance their busy careers with their relationship.

While Christine Taylor remained focused on motherhood, Ben Stiller’s career just continued to thrive, and he was consistently busy working. And, based on the fall-out, Quinlin’s actress-mother suffered a bit more than his actor-father.

Ella and Quinlin’s celebrity parents once again shocked their fans when in early 2022 Stiller announced he and Christine Taylor were officially back together.

Their reconciliation rumor started when in Sep 2019 people noticed them together attending the 71st Primetime Emmy Awards together and posing with one another on the red carpet after their split in 2017.

As per People magazine, post their public breakup, the two were spotted together for the first time in 2018. The once separated couple stepped out into NYC by each other’s sides with big smiles on their faces.

Their behavior led many to wonder if they had reconciled already. However, it wasn’t until February 2022, that Ben confirmed he and Christine indeed have rekindled their union.

Ben explained the 2020 coronavirus pandemic actually brought them back together. That year in March, he went back to their family home to quarantine with his then estranged wife and their two kids.

Over that time, the pair apparently realized they still had feelings for each other that only grew stronger the more time they spent together. Stiller admitted this all to Esquire in Feb 2022.

So far, the youngest child of Stiller has four acting credits. As mentioned Dempsey’s first-ever film gig was in the 2008 animated comedy Madagascar: Escape 2 Africa where he voiced baby Alex.

He then again served as a voice artist in the 2010 animated film, Megamind, this time as one of the schoolchildren.

Next, he had an uncredited role in his father Ben Stiller’s starrer Night At The Museum: Secret Of The Tomb 2014. His last big-screen role was playing Guy’s child in the 2021 film, Locked Down starring alongside Anne Hathaway and Chiwetel Ejiofor.

Much like Quinlin himself, his sister, Ella has also a few acting acclaims. She also provided her voice in the 2010 movie Megamind and had an uncredited role in the film Night at the Museum: Secret of the Tomb.

Her other credits include TV mini-series, Escape At Dannemora, Hubie Halloween, Fork, Knife, and Chainsaw, and Friday.

Ben Stiller’s Experience Of Working With His Son Quinlin In Madagascar?

Ben opened up about his two kids working with him in the 2008 movie Madagascar 2 and how his two children loved being on it. He explained working with Quinlin was quite tough because he reportedly knew that there was something going on.

The New York-born actor-father said Quinlin and Ella were sort of wary of the situation because they didn’t like anybody telling them what to do.

The then almost three years old Quinlin, nonetheless, got in the studio, and when he got in front of the microphone, as per his actor father,

There was like a run of like a minute where he just had fun and he was making sounds, and we were saying, ‘Oh, be happy, happy and sad.’

After that though, Quinlin started to experience a little bit of intimidation by the microphone and the whole direction thing. Ben admitted after that he started to feel, like a horrible stage parent for ordering his children that way.

Stiller said his kids nonetheless enjoyed the experience and admitted he was happy that they weren’t getting up there and ‘going all Shirley Temple or something.’

When asked how he would feel about his children pursuing the acting business in Nov 2010, Ben, responded by saying,

If they wanted to, I would support it. It’s not the easiest business, and I think I would try to tell them the ups and downs, you know? Or, try to give ’em some sort of overview of my experience, and give them a sort of an idea of what it is.

Quinlin’s father, however, suggested one should do it only if they love doing it. He also mentioned how he had already encouraged his children to go to college regardless.

In an interview with Chicago Parent in 2010, Ben Stiller said being the father of Quinlin and his sister, Ella was just another thing that made him nervous. He at the time also recalled the strangeness of becoming a first-time dad.

Explaining the time when he was about to become a father for the first time, Ben said he knew what was going to happen since his wife got pregnant. Stiller, however, admitted the feelings were all abstract.

“And then suddenly the next time you go back to the house, you have another person living with you. Who you’ve just met. Your child.”

Stiller added while he could see aspects of himself in his kids, he also saw two totally unique individuals. He additionally confessed to wondering how Quinlin and Ella became so well adjusted.

As A Child, Quinlin Loved Story Books And Thomas Train

Ben admitted being an actor came in handy to him when reading bedtime stories, especially to his son, Quinlin. While talking to Chicago Parent, the Emmy winner said,

I think every parent has to sort of be an actor with their kids when they’re doing that. You know, you just sort of have to commit fully, and you don’t care, because you know the audience, and you want them to be happy, and kids love to be told stories, my son especially.

Stiller also said how fun it was to be able to do that for his son.

Ben at the time also revealed his son Quinlin as a kid liked to hear the same stories over and over again.

The Teen Choice winner also divulged about his son’s fascination with Thomas Trains and said how he used to know all the Thomas Trains and all the names of the trains, which were a lot. He reportedly knew them inside and out and demanded his celebrity father knew them too.

Because of that, Quinlin apparently liked to hear stories from his father that specifically involved the Thomas Trains. Quinlin also used to correct his father about the name of Trains in the event that he made errors.

What Is Quinlin’s Father, Ben Stiller’s Net Worth?

Quinlin’s father, Ben Stiller has been in the film industry for decades and has made hundreds of millions of dollars via producing hit comedies. Multiple sources agree he has a net worth of about $200million.

Further, he has also been part of highest-grossing franchises like Madagascar and Zoolander each of which has gone on to do business of over $500million at the box office. Worth mentioning is as an actor his films have grossed more than $6.4billion at the worldwide box office.

He is also the owner of Red Hour Productions, a film production company.

While Quinlin, for now, doesn’t seem to have any handles on social media, he occasionally makes cameos on his father or mother’s Instagram, Facebook, or Twitter.