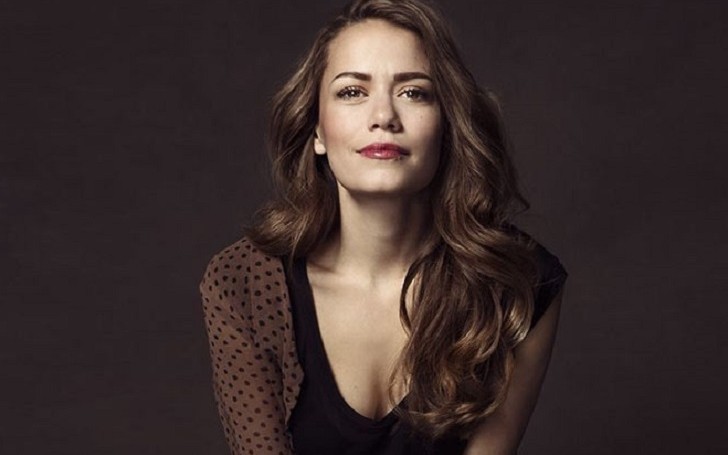 Bethany Joy Lenz is famous for her significant portrayal of Haley James Scott on One Tree Hill. She was once married to a musician husband. But the actress has kept her love life closely guarded following their separation.

Now the big questions arise, who is Bethany Joy Lenz dating in 2021? And besides, who was her spouse? Why did they get separated?

Find out answers to all the questions and take a close look at her personal life including details from her past relationship history.

Who was Bethany Joy Lenz’s Husband? Details on Her wedding

Bethany Joy Lenz and Michael Galeotti exchanged their vows on 31st December 2005. Their New Year’s Eve wedding ceremony took place at a barn in Hillsboro, Oregon, not so far from their Battle Ground mansion.

The couple greeted their 75 wedding guests with hot chocolate and apple cider. Following their nuptials, the actress also changed her maiden name to Galeotti.

Bethany and her now ex-hubby Michael first met in the early 2000s. Subsequently, after dating for a mere two months, Galeotti proposed and they became a betrothed couple. In an interview, Bethany called the proposal, a “spontaneous proposal.”

Michael proposed Bethany while the actress was filming One Tree Hall in Wilmington, North Carolina.

Bethany and Michael welcomed their first and only kid, a daughter Maria Rose Galeotti, on 23rd Feb 2011. The actress announced the big news on her blog and wrote,

“Michael and I are pleased to announce the arrival of our beautiful girl, Maria”

They both kept their pregnancy news out of the public eye but a source close to the show One Tree Hill confirmed E! News that the actress was pregnant in August 2010.

Besides, she often shares a sweet snap with her baby girl on social media.

The doting mother currently resides with her daughter in Los Angeles, California.

Just after the arrival of their daughter, the couple’s marriage started hitting the rocks. Bethany announced that she will be getting a divorce from her husband of six years and her plan to come back to her maiden name, Lenz, again on her blog in early 2012.

As most of you know, as much as I love to share with you the magic of ordinary days, I am also very private about my personal life. In fact, the only reason I’m saying anything about this at all is because you’ll all be wondering soon why everyone is calling me ‘Bethany Joy Lenz’ again,” she wrote. “I’m sorry to say that Michael and I have decided to divorce.

The One Tree Hill actress also wrote they separated amicably and remain a close friend. She further stated they would do their best to co-parent their daughter.

Galeotti is a musician and the former keyboardist for the American indie rock band Enation. He joined the band in 2004 and left the group after eight-year of association in 2012. The group included Jacksons’ brothers Jonathan and Richard Lee.

In 2008, Bethany also recorded the song ‘Feel This’ with her husband’s band for the fifth-season finale of One Tree Hill. The group also made a cameo appearance on the series.

Bethany Joy Lenz and James Lafferty are not married in real life but played a husband and wife in the TV series One Tree Hill. She played Haley James Scot, the quintessential girl-next-door, a close pal with Lucas Scott (played by Chad Michale Murray) while her TV spouse James portrayed Nathan Scott.

The two had great chemistry inside the reel. On 13th March 2016, Bethany even shared a photo on Insta with Lafferty with the caption,

The on-screen couple also shared a son Jamie Scott, played by Jackson Brundage, a highly-intelligent kid on the show.

No, Paul Johansson and Bethany Joy Lenz are not dating. They are just close friends from the hit TV series One Tree Hill. Rumors of their affair first started when Paul shared a picture with Bethany and wrote a rather affectionate caption.

The actor added a picture of Bethany in the honor of her 37th birthday in 2018. His caption read, “I’ve been through the best and worst times of my life and you have been my rock. Here’s to my best pals birthday. As I’ve always said, we need more Joy in the world. Love you!”

Although there are some reports about their alleged romance, we can say for sure that they are nothing more than professional colleagues.

Lenz was in a long-term relationship with the actor Wes Ramsey. As per sources, the couple began dating back in 2012. Lenz and her now ex-boyfriend Ramsey made several joint appearances throughout their romance.

On 21st October 2013, the two strolled together in Paris along with Lenz’s then two-year daughter Maria. Furthermore, the two were seen at the Farmers Market in Studio City, California in early 2015.

However, their terrific romance also slowly faded away from the spotlight and the couple reportedly broke up in 2017.

Who is Bethany Joy Lenz’s boyfriend in 2021? About Her Current Relationship Status?

Bethany is quite tight-lipped when it comes to her love life. She is possibly single at this moment. She was most recently linked with UnReal actor, Josh Kelly.

Dating rumors between the two first sparked when both of them were seen together holding hands back in early June 2018. The two also appeared at the Equality Now’s 4th annual, Make Equality Reality Gala in Beverly Hills on 3rd December 2018.

An eyewitness for the couple told Us Weekly,

The eyewitness further claimed they were smiley with one another throughout the night and it looked as if they like got lost in each other.

Initially, Lenz and Kelly first met when they appeared together for the E! musical drama pilot Songbyrd in 2013. Despite all that, they never confirmed their relationship to the public.